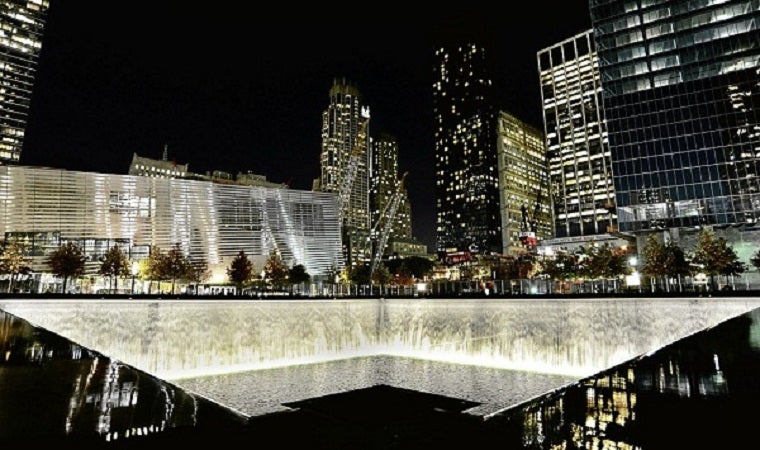 When the hijacked planes crashed into the World Trade Center’s Twin Towers in New York on the morning of Sept. 11, 2001, I was in Manila, over 8,000 miles away. My last class at the university had just finished and as I was getting ready to go home, I received a text message from a friend telling me about the attacks.

Like so many people around the world, I spent the rest of the night and the following days glued to the TV, watching the news. I pored over CNN’s memorial website for hours, reading about every single victim who died in the horrific act of terrorism and shedding tears over the loving tributes—my way of honoring their memory from far away.

The girl who died the day before her 25th birthday, the woman who found out she was pregnant that morning, the three-year-old who had just been adopted by his two dads. I could never forget them.

In 2008, I found myself in New York on Sept. 11, exactly seven years after the attacks. We took the subway to the World Trade Center site where we saw a car with the image of the Twin Towers and the words “Never Forget” painted on its hood. There was a cross which was actually fused steel column from one of the World Trade Center buildings. Women with guitars sang about Jesus’ love while conspiracy theorists and protesters urged people to question the US government.

There were fire trucks and policemen, there were people wearing the images of the loved ones they had lost on 9/11 around their necks. Some held up framed photographs.

As we stood on the foot ramp and stared down at the construction at Ground Zero, a crazy-haired woman walked up to us.

“Are you from New York?” she asked.

“No,” we said, and she launched into a diatribe against the planned 9/11 memorial. “What they’re doing is an insult,” she said, before walking away, still muttering to herself.

Five years before that, in 2003, an international design competition was opened, encouraging people from all over the world to send in their ideas for the 9/11 memorial. Over 5,000 entries were received from 63 countries.

According to the book “A Place of Remembrance,” a 13-member jury “that included world-renowned artists and architects, prominent arts and cultural professionals, a 9/11 victim’s family member, a lower Manhattan resident and business owner, and representatives of the governor’s and mayor’s offices”—was formed to evaluate the entries.

One of the jurors, Paula Grant Berry, whose husband David died in the South Tower of the World Trade Center told the New York Times, “I was overwhelmed that so many people cared—and wanted to share our grief.”

Ultimately, after much debate, the jurors chose “Reflecting Absence” which was designed by New York-based architect Michael Arad. The jury released this statement: “In its powerful yet simple articulation of the footprints of the Twin Towers, ‘Reflecting Absence’ has made the voids left by the destruction the primary symbols of our loss.”

Arad’s plan was to create two reflecting pools and waterfalls within the footprints of the twin towers. Michael worked with Peter Walker, a California-based landscape architect, adding trees and landscaping to the design. The Memorial was going to cover eight of the World Trade Center’s original 16 acres.

Two months after it opened in September 2011, I had the chance to visit the memorial.

It was early evening on a Wednesday. Armed with our visitor’s passes, we took the E train and got off at World Trade Center. As we made our way down Church Street, we were met with chaos. People were rushing home from their offices. The Occupy Movement was still encamped at Zuccotti Park—there were protesters, policemen, bomb squads and emergency personnel all over the place.

We followed the signs to the memorial site and when we stepped into the entrance, there was sudden silence.  Security was tight—airport tight—as it should be. Once we passed the security check, we walked towards one of the reflecting pools and marveled at its size and beauty. Thirty-foot waterfalls cascaded down its four sides.

The pools were surrounded by bronze parapets on which the names of the 2,983 men, women and children who were killed in the 9/11 attacks in New York, Pennsylvania and the Pentagon and the Feb. 26, 1993 World Trade Center bombing had been stencil-cut.

It was remarkable how the names were arranged. Arad refused to just inscribe the names alphabetically. He wanted to allow meaningful adjacencies, which would make it possible for families and friends to be listed together. It was a task that sounded too difficult and complex to many and it was. But it was worth all the effort.

In the end, the names were arranged by affiliation—employees of the same company, first responder units and flight crews were listed together. The families of the victims also asked for certain names to be placed next to each other and these requests were honored.

Visitors had left flowers and stones on top of their loved ones’ names. There were pink roses, clumps of baby’s breath, stargazers, daisies and gerberas.

We made our way around each pool slowly, reading each name and tracing some of them with our hands. The names were lit from under—they glowed in the dark night as we walked by.

There were a number of people milling about, but I was struck by how solemn the place was. It was both beautiful and incredibly sad.

On one side of the memorial, there were computer screens that allowed visitors to search for specific names. Searches could be done by name, birthplace or residence, employer or affiliation, first responder unit or flight. The system provides information on the victims and tells you in which pool and which panel you can find their name.

We searched for those who were born or lived in the Philippines and said a prayer for them and all the other victims.

The Freedom Tower and the museum were both under construction during our visit. At the Visitor Center, items recovered from the site were being exhibited. There was a big piece of aluminum and a fireman’s dusty helmet. Most striking to me were the recovered wallet, identification card and ring of Robert Joseph Gschaar, who was in the South Tower when it collapsed. The $2 bill that he presented to his wife when he asked her to marry him was still in his wallet when it was found. It was heartbreaking. People stood around watching 9/11 documentary clips on a big screen.

On the way out, I bought a copy of “A Place of Remembrance,” the official book of the memorial.  A few steps later, we were back in the streets of New York, back in the intoxicating chaos of the city.

For more info on the memorial, visit www.911memorial.org.