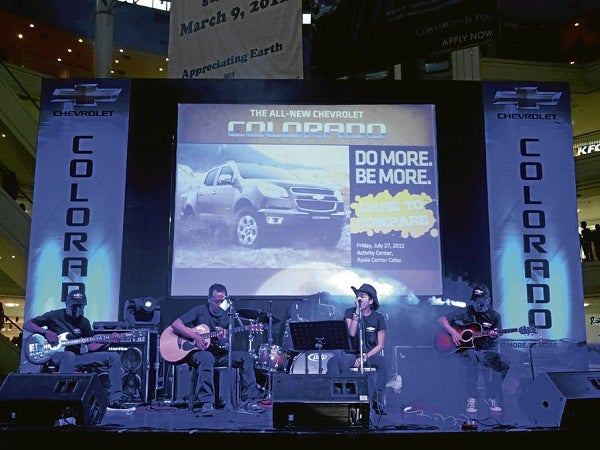 The Chevy Colorado launches in Cebu

Admit it, yank tanks have always been cool despite the current un-Americanization of America, and you’ve always secretly had a thing for pick-up trucks minus the driver with the trucker tan.

Now, Cebu’s car scene has found a new darling in the all-new Chevrolet Colorado. Chevrolet Cebu president and CEO Franklyn Ong was proud to recently launch the new pick-up (“it’s not just a pick-up!,” he says) in the activity center of Ayala Center Cebu.

“What makes it so special?” was the question of the night for us, and he answered that it is built on nearly a century of Chevrolet trucking heritage, so we know that the folks at Chevrolet definitely know what they’re doing.

“You can do more and be more, as it has been tested in the roughest terrain and the toughest weather conditions around the world. Not only that, the Chevrolet Colorado is engineered with the best combination of power, durability, comfort and economy in its class.”

Franklyn dared us to compare the Chevy Colorado to any midsize pick-up truck out in the market today, assuring us that it is quite simply, the best in its class “in terms of power, torque and acceleration.”

In full support was his beautiful wife Emily; and their children Victoria Belle, Angela Belle and Franck Ethan; as well as his partners Daniel Ong, engineer Sidney Po and wife, Judge Jocelyn Po; Emmanuel and Melody Ong with their son Arthur Louie.

Jessica Lee of The Covenant Car Company Incorporated, the exclusive distributor of Chevrolet in the Philippines, flew in from Manila to grace the momentous occasion for Cebu’s car enthusiasts and friends from the media.

Hosting the event was ABS-CBN’s Phoebe Kaye Fernandez and bringing out the all-American heritage of Chevrolet was Cebu’s best classic rock and blues band, Cuarenta, injecting some acoustic rhythm with slow-tempo blues for their first set, then upping the energy level on their second set with some Stevie Ray Vaughan and ZZ Top.

Vocalist Kaye Tradio was phenomenal, belting out an intense performance in her trademark cowboy hat (how does so much power come out from such a tiny girl?!), as was the rest of the band with her husband Henry Tradio and Arnold Ang on lead guitar, Lyndon Banzon on bass guitar, and Juel Zoleta on the drums.

We indulged in American grub like mini-burgers and hotdogs in easy-to-eat sizes and could not stop going back for seconds of the old-fashioned mac and cheese. Of course, in true American style, we washed it all down with ice-cold beer.