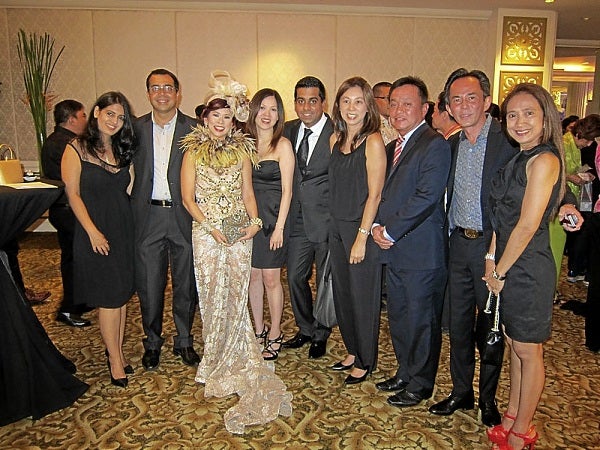 After watching the much-awaited “The Phantom of the Opera” in Manila, I was inspired to make my pre-50 birthday party just as epic in scope—without, of course, the crashing chandelier.

But hardly anything can match “Phantom.” Gala night at the Cultural Center of the Philippines Main Theater was a full house, and the outstanding performance was given a standing ovation and several curtain calls. It was truly a magical night.

Afterwards, the cast party at the Diamond Hotel was equally fab. It was wonderful to reunite with the South African cast, many of whom we met when we flew down to Johannesburg to watch the show earlier this year. Beringer Rose champagne and an extensive wine selection complemented a delicious selection of hot and cold buffet.

Looking so radiant was soprano Claire Lyon, who plays Christine Daae. Actors Jonathan Roxmouth as the Phantom and Anthony Downing as Raoul were happy to be finally performing in our country and to get the chance to delight Filipino theater lovers.

The rest of the cast hit the dance floor to the music of a swinging band. Performers really know how to party.

The “Phantom of the Opera” is presented in Manila by Lunchbox Theatrical Productions, Hi-Definition Radio, Concertus Manila, Smart Infinity and Citi. It is staged for a strictly limited season, so do catch the show.

For “Phantom,” I wore a stunning beaded gown by talented Cebu designer Ronald Villavelez. It was impressive enough to catch the eyes of wardrobe head Eugene Titus.

My other fave Cebu designer is Philipp Tampus. For the 2012 edition of Samsung-Inquirer’s “Face-Off,” I wore one of his flattering, glittery gowns to complement the beautiful bridal masterpieces of the country’s leading designers. Thanks to Inquirer Lifestyle, “Face-Off” is the largest ever Filipino bridal collection, produced in cooperation with Samsung and Look Magazine.

From fashion icons to full-time moms—it’s been an incredible lifestyle change for Rissa  and Amanda, but it’s a change they both love, for all its challenges and rewards.

Amanda loves her Samsung Digital Washing Machine, a fully automatic washing machine that can get laundry done with one press of a button. It comes equipped with Samsung’s Eco Bubble technology, which makes washing more efficient and saves up to 70-percent more energy.

Rissa, who recently delivered a beautiful baby girl, talked about the Samsung Digital Air-Conditioner, whose Smart Inverter Technology makes more efficient use of electricity. Its Virus Doctor technology also immobilizes and deactivates bacteria and turns them into water vapor, for a steady flow of cool, clean air.

Samsung was a generous sponsor at my pre-50 birthday bash.

JC Buendia’s bridal gown at “Face-Off” was so romantic. He is still on a high from his 25th anniversary fashion show held at Marriott Hotel.

After his fashion show, we had delicious meal at Cru Steakhouse. Not the average steakhouse, Cru captures the flavor of quality, grilled beef. Steaks are hand-cut, hand-seasoned and carefully prepared. Salads are freshly made and desserts are simply sumptuous. The overall atmosphere is warm and friendly, with a courteous and attentive staff.

Whether you are looking for a great steak, celebrating a special occasion, reuniting with old friends or meeting for the first time, Cru is the steakhouse to go to. The place can accommodate up to 70 people, with two private dining areas for more intimate functions.

The Marriott Hotel Manila hosted my pre-50 birthday bash. I’m still recovering from that monster party, so I will just feature it separately next week. For now, let me just say that the Marriott is a cool hotel for a post-party crash. The two top floors house executive-level rooms and 19 suites. Guests enjoy a spectacular view of the 18-hole Villamor golf course from the executive lounge.

Let me end this week by greeting fellow Virgo birthday celebrator Wilson Tieng, who rocked the city with a fabulous party at the Mandarin Hotel. Among his guests were Kitchie Benedicto, who manages Version 4.0, a high-energy band that performed at my party, too.