BenCab with his nudes and erotica | Lifestyle.INQ ❮ ❯ 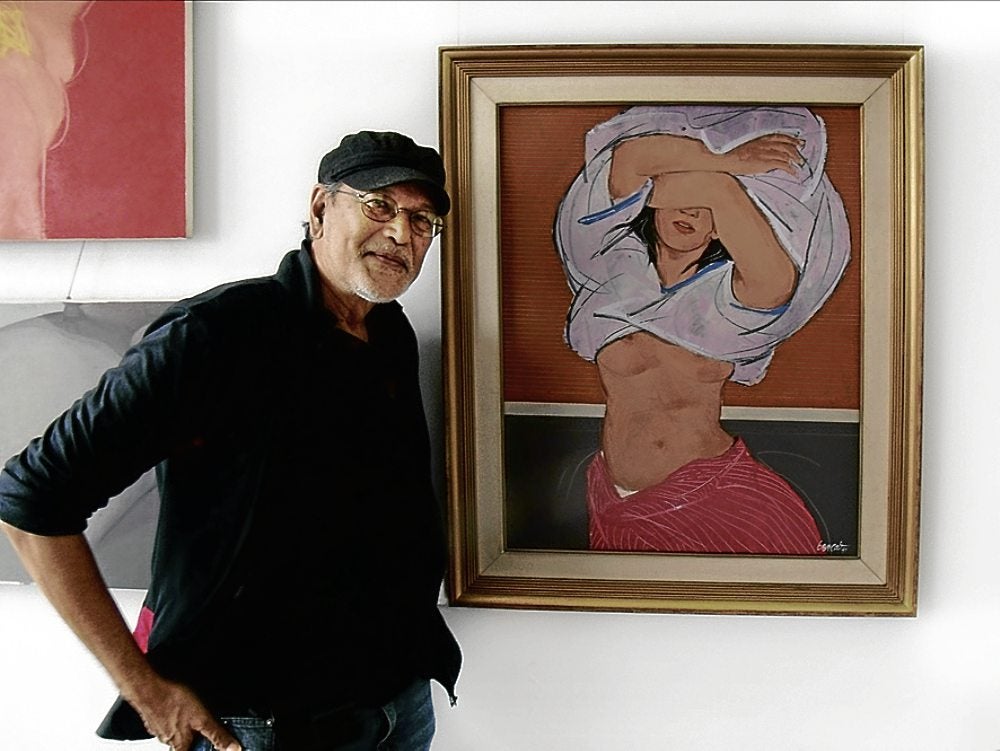 BENCAB by his work, in the Erotica Gallery

BenCab with his nudes and erotica

Tucked in the BenCab  Museum (Asin Road in Tuba, Benguet,  15 minutes from Baguio City), on a quiet corner one level below the building’s main entrance, is a small room, not more than 30 sq m, quite nondescript from the outside but for the cautionary sign on the door warning visitors of its contents “that may be offensive to minors and certain individuals.”

This is the Erotica Gallery, one of eight galleries in the four-story art complex.  Although much smaller than other galleries, it has become the museum’s most popular attraction, for obvious reasons.

“They laugh, they get shocked in a way because they’re not used to this,” National Artist Benedicto Cabrera, or BenCab, says.  “Nowadays, kids can easily access pornography on the Internet but here they see sexuality portrayed as art.”

On exhibit are BenCab’s painting of female nudes, a three-dimension terra-cotta piece by Julie Lluch that can be seen either as a flower or an oversized vagina, or both, and a few Cordillera wood carvings depicting couples in various acts of coitus.

At the center of the space is a new acquisition, a long hardwood bench sculpted in the form of a male figure complete with a well-defined slanted phallus, supposedly used in the highlands of old as a lying bench for foot rubs.

The Erotica Gallery is a humble counterpart of, say, Amsterdam’s notorious Sex Museum, but given the  Filipino culture, it’s likely to make more than a few faces blush.  As such, the gallery becomes a spatial barometer of attitudes about sexuality, values that are at once conflicting and evolving.

In this space, art confounds, enlightens and instructs. Here, in his museum, BenCab is provocateur, philosopher and guru.

“Here,” he says, pointing at a barely visible stroke of textured curve on the woman’s stomach that renders the composition more vividly sensual.   “Tsamba lang ’yan. I don’t think I can do that again.”

This is a humble confession of fortuity.

“My nudes,” he explains, “are things I do  between my larger pieces.  I love doing them because I’m more relaxed when I draw from life.  The subject is already there before me and I don’t have to think too much.”

In 1968, BenCab, with Tiny Nuyda, Ding Roces and H.R. Ocampo, staged the country’s first exhibit of nudes.  The show received a negative review from a popular female columnist who found the works devoid of sensual value.

This temperament is much evident in the pieces that make up the collection of the Makati-based Gallery Big, on view on a strictly invitational basis at the Makati Shangri-La Hotel on Sept. 14.

In this private collection, BenCab’s nudes are rendered not with the hyper-masculine bravado that defines Filipino machismo, but with an almost reverential disposition toward the power of the female form.

The allure emanates from the fantasy of possibilities evoked by the imagery, replicated, multiplied in the realm of the subconscious, but potent only for its perpetual non-actualization.

He gives his nude subjects the subtle power to ignore and rebuke, to nullify the voyeuristic gaze, for instance, in the depiction of self-gratification. The models never really look back, lost in the moment of undressing, rest or auto-pleasure.

The viewer becomes fixated at the movement of curves that undulate rhythmically to form and unite limbs, breasts, and buttocks shaping them into the women of our fantasies, made real if only at the level of the visceral.

He names them, too, and in this act of identification conjures storied subjects clothed with untold narratives, begging to be discovered.

BenCab’s canvases manifest a dynamic energy that many artists half his age would be hard-pressed to duplicate.  At 70, he is blessed with the gift of hindsight, grateful for the success that has come his way but mindful of the bumps along the road.

Somewhere in BenCab’s terraced garden, in an area off limits to the public, lies a waterfall he didn’t know was there years ago when he bought the property one parcel of land at a time.  Today its waters gush even stronger cascading to the river down below.  Life, it seems, has more surprises waiting in the wings for BenCab.

The author is an assistant professor of the Arts & Sciences Faculty of St. Scholastica’s College in Manila where he teaches courses in journalism, film and criticism.  He is also a senior lecturer at the UP College of Mass Communication.  E-mail [email protected]