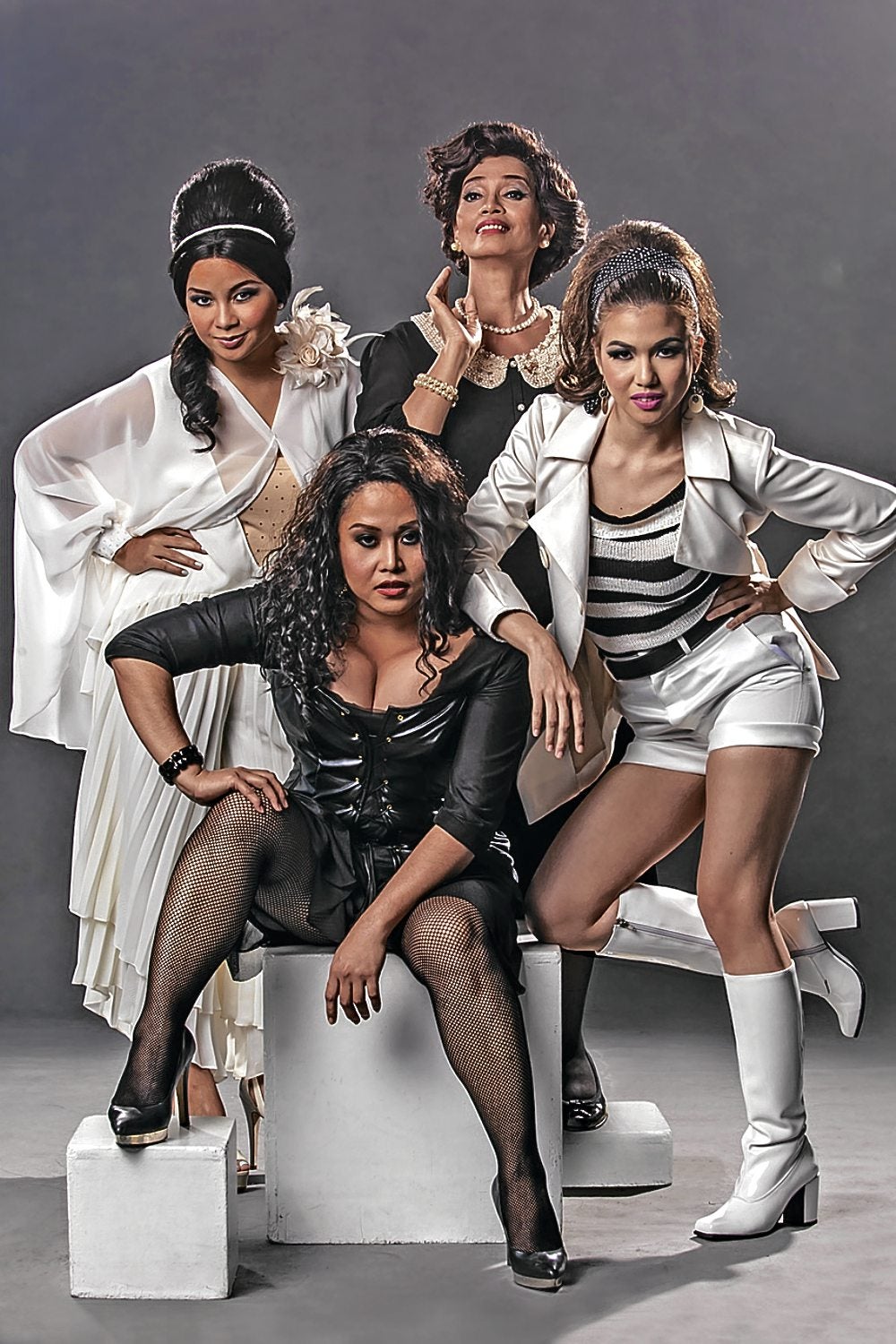 Before I was totally consumed by photography, my soul had been a slave to another form of art, the theater.

As far back as I can remember, the theater has been my source of inspiration and passion. Believe it or not, I have been acting since grade school, dancing in a chorus since high school, and directing plays since college.

So it is no wonder that now, in my not-so-new career, I support the theater arts because it is the only way I can reconnect with my old love.

I live vicariously through the actors when I see them perform. I cannot help but express my desire to be in their shoes again. One such opportunity came when Atlantis Productions came to my studio to have a pictorial for its upcoming musical “Nine.”

I’ve been familiar with this musical since high school because one night when the Tony Awards were being aired on Channel 9, the image of a prostitute singing “Be Italian” to a group of young boys stuck to me like glue. Maybe it was hormonal, maybe it was that artistic seed inside yearning to grow, but whatever it was, I loved it! “Nine” won five Tony Awards, including Best Musical.

Most musicals made into movies evolve stories that deviate from the original stage productions, and they sometimes add or delete musical numbers, depending on the director or the actors involved.

That’s why most of the numbers in the movie are more commercial, and the story compressed and simplified.

The stage musical, however, is more refined because of the presence of an immediate audience; the response is instantaneous.

Eight muses, eight beautiful women who inspire a seemingly uninspired director. Top that with nine beautiful, haunting melodies for each muse, and I was in Nirvana.

I would sing those songs in my head, directing the actors, designing the stage, lighting it the way my mind and heart would see it.  I daydream.

Now the dream has turned into reality. In front of me, assembled by Atlantis Productions, under the guidance of Bobby Garcia, were nine of the most beautiful and talented actors in Philippine theater. There, too, was Guido, the controversial Italian director whose plight is the theme of the musical.

The cast includes Menchu Lauchengco- Yulo, whom I fondly remember as the young girl in “The Fantasticks” and “Evita.” I always jest that when I grow old I want to be like her. She seems to have found the secret of eternal youth, but her beauty is surpassed by her voice and that ability to become any character. She plays Luisa, the wife of Guido.

Cherie Gil—all together now: “You’re nothing but a second rate, trying hard copycat.”

This iconic actress needs no introduction. She sings, she acts and she conquers all media. Fresh from throat surgery, she bravely bounces back to perform in this musical.

Nothing seems to faze this iconic actress, and I must admit, I would not want to be caught in her crosshairs. She plays Liliane, former Folies Bergere dancer and now producer for Guido’s latest film.

Eula Valdez wowed us all in “ZsaZsa Zaturna, the Musical.” Who would have guessed that beautiful face and body had a really wonderful voice? Popularly known as Amor Powers and Black Lily, this secret crush of mine is one woman I truly admire, so down-to-earth; what you see is what you get. She doesn’t think any role is too small or too big for her caliber.

Eula performs beautifully as Claudia, the diva film actress and muse to Guido in the musical.

Sitti Navarro made a name in the industry as the bossa-nova queen. Apparently the mild-mannered singer, too, has been bitten by the theater bug. She plays the Lady of the Spa. And she delivers. Did you know she came out in a Tony award-winning musical, “Spring Awakening”?

Carla Guevara-Laforteza—I love this bundle of energy, whom I last saw in “Avenue Q” and “Spelling Bee.” For those who have forgotten, Cameron Mackintosh cast her as understudy for Kim and Gigi in “Miss Saigon” in 1995-1997. She was also in the stable of actors in ABS-CBN.

This seasoned actress seems to know no boundaries. Whether it be on the stage, TV, or the movies, she contributes unbridled energy, beauty and talent. She plays Guido’s neurotic mistress, Carla.

Ima Castro is another alumni of “Miss Saigon.” I don’t know if she even remembers that I was one of the first photographers who shot her. I did her first album cover. When I first met her in my studio, she was a shy provincial lass.

Fast-forward to 10 years, she came back from London a different woman. Standing before me was someone like a phoenix who emerged from the ashes—she has become that powerhouse performer we all know.

My jaw drops every time she performs. Is it I enthralled, or am I just amazed that this woman has a voice that can bring the house down?

She plays the prostitute Sarraghina, who sings the show-stopping “Be Italian.”

I cried when she played Abuela Claudia in the musical, “In the Heights.” I was stupefied when I saw her as Madame Armfeldt in “A Little Night Music.”

But what amazes me is her reserved yet powerful presence. I have always been a fan of Jay Glorioso, and I think I always will be. She has this magnetic presence onstage that makes me empathize with whatever role she portrays.

In this musical she plays Guido’s mother, whom Sophia Loren emerged from retirement to portray. If that doesn’t say how important the role is, I don’t know what does.

Even the musical theater has its own “it” girl, so people, meet Yanah Laurel.

Philippine theater has so many talented Laurels. With that bloodline, this young woman, no wonder, is one of the most sought-after actresses. Young as she is, she has already done numerous works that include “Hairspray,” “Spring Awakening,” “Legally Blonde” and “Little Mermaid.”

Watching her perform is like feeling a breath of fresh air on stage. In this musical, she reprises Kate Hudson’s role in the movie—somewhat. Though the movie and musical characters are both  named Stephanie, in the stage version, Stephanie is a film critic and associate producer to Guido’s newest film. The two Stephanies also sing different songs.

Playing Guido Contini is none other than the most sought-after leading man in Philippine musical theater today, Jett Pangan, whom everybody knows as the lead singer of the rock group The Dawn.

How can a rock star suddenly become a stage actor, and a very good one at that?

The answer is simple: talent, lots and lots of it.

Jett is among those I consider a true artist, inside and out; he breathes it, he lives it.

The hardest part about describing Jett is finding the words. All I can do is stand up and bow to his presence. He can play funny, serious, and as we discovered in “Rock of Ages,” he dances, too! Is there no end to his genius?

I cannot imagine a more perfect cast for “Nine”—well, if they made me an understudy for Sarraghina, it would be perfect! But I cannot serve two gods at one time, so I choose to stay where I am and avoid future ridicule.

With this powerhouse cast assembled in one musical, one is so tempted to watch, even if you are not familiar with the music. Whether you have seen the film or not , I advise you to see this live on stage.