How to introduce Robredo, the public servant, to your kids | Lifestyle.INQ ❮ ❯ 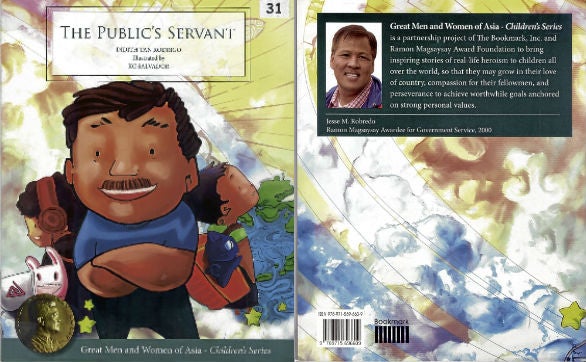 “THE PUBLIC’S Servant” with Illustrations by KC Salvador

How to introduce Robredo, the public servant, to your kids

Contemporary Philippine history records August as the month of deaths of individuals highly admired like Cory Aquino (Aug. 1), Cory Aquino’s  Interior Secretary Jaime Ferrer (Aug. 2), Ninoy Aquino (Aug. 21), and the most recent,  P-Noy’s Interior Secretary  Jesse Robredo (Aug. 18).  These dates should give greater relevance and meaning to the annual holiday at the end of the month, National Heroes Day.

The extensive media coverage lauded  the extraordinary public servant Jesse Robredo, and drew such public interest and curiosity because of the lamentable and dramatic circumstances of his passing juxtaposed with the grace, serenity, and courage of his wife Leni and three daughters.

Happily, the Great Men and Women of Asia—Children’s Series includes an illustrated  Jesse Robredo biography for young readers, by virtue of his having been a Ramon Magsaysay Awardee for Government Service in 2000.

Robredo’s accomplishments as legendary mayor of Naga are documented in a manner that children will relate to, through a series of Internet chats between two young boys, simply identified as XtnXtra, writing from the US, and MattDude2000, a balikbayan on forced vacation in his parents’ hometown, Naga City, where he is complaining of sheer boredom.

What kind of vacation is this, he says, when all we do is attend my parents’ reunions with all their friends, and I have to kiss folks I am seeing for the first time?

It is such a sleepy town, Matt describes Naga, that he even wonders if it has any Internet at all. He is surprised that it does, making possible the communication with XtnXtra to continue.  He can’t wait for the  days of boredom to finally end.

It turns out to be quite an unusual vacation, for Matt’s announcement that he has met the city mayor leads his incredulous friend to ask how that ever happened. Was his friend of any importance for the mayor to bother with him?

As Matt reveals more details about the mayor, they both agree that this mayor, visible in T-shirt and shorts  “does sound weird… but interesting!”  Interesting enough for XtnXtra to ask for the mayor’s autograph.  Why weird? He was playing basketball in the streets instead of doing “mayor stuff,” and  did not have bodyguards shadowing him all the time.

Biking around the city

So  unlike in America where guns, dark glasses and walkie-talkies would be standard fare for security detail,  Mayor Jesse, as the Naga citizens call him,  likes biking around the city—why, does he not own a car?

More anecdotes are narrated, revealing the grit and the character of former Mayor Robredo.  When he biked into the ricefields one afternoon in search of a little girl who had run away from home, the cynical wondered.  Was it an election gimmick that he would go to all that trouble?  That was easily dismissed, because it was his last year in office and could not run again as mayor.

Of course, Matt’s balikbayan visit coincides with a typhoon, with Naga as the hardest hit,  the worst in 12 years.  Call it the highlight of 10 days of boredom.  It was a familiar scenario, with many homes under water and residents needing to be rescued.  Matt’s cousins were part of the youth rescue team that Robredo had organized precisely for such crises.

The story to top all stories was that the morning after the storm, Robredo was seen at the town plaza with a long broom sweeping away the debris. Without needing to say anything more,  many of the Naga citizens did the same in the areas outside their homes.

This short biography is merely an introduction to this public servant, but enough to pique curiosity.  Thus, it is helpful that this book and the others in the series of Magsaysay awardees and the Modern Filipino Heroes includes a more detailed biographical account in the inside back cover, with the story itself focusing on specific incidents in the hero’s life. It is such human interest incidents that are woven together to highlight the distinct qualities of heroism and greatness.

The format of this biography, entirely in Internet chat style,  should make friendlier and less formidable reading, especially for reluctant readers.  The use of informal adolescent  lingo and the boys’ exaggerated expressions are other appealing features.  The conversation is punctuated with “dude,” the trip to Naga described as “torture,”  with Matt’s mother referring to this homecoming to his country of birth as one that would “build character.”   What initially appeared to be a trip “that was so not a vacation”’ emerged as one that truly built character, because of the dude’s meeting with a real-life hero.

E-mail the author at  nenisrcruz@ gmail.com.