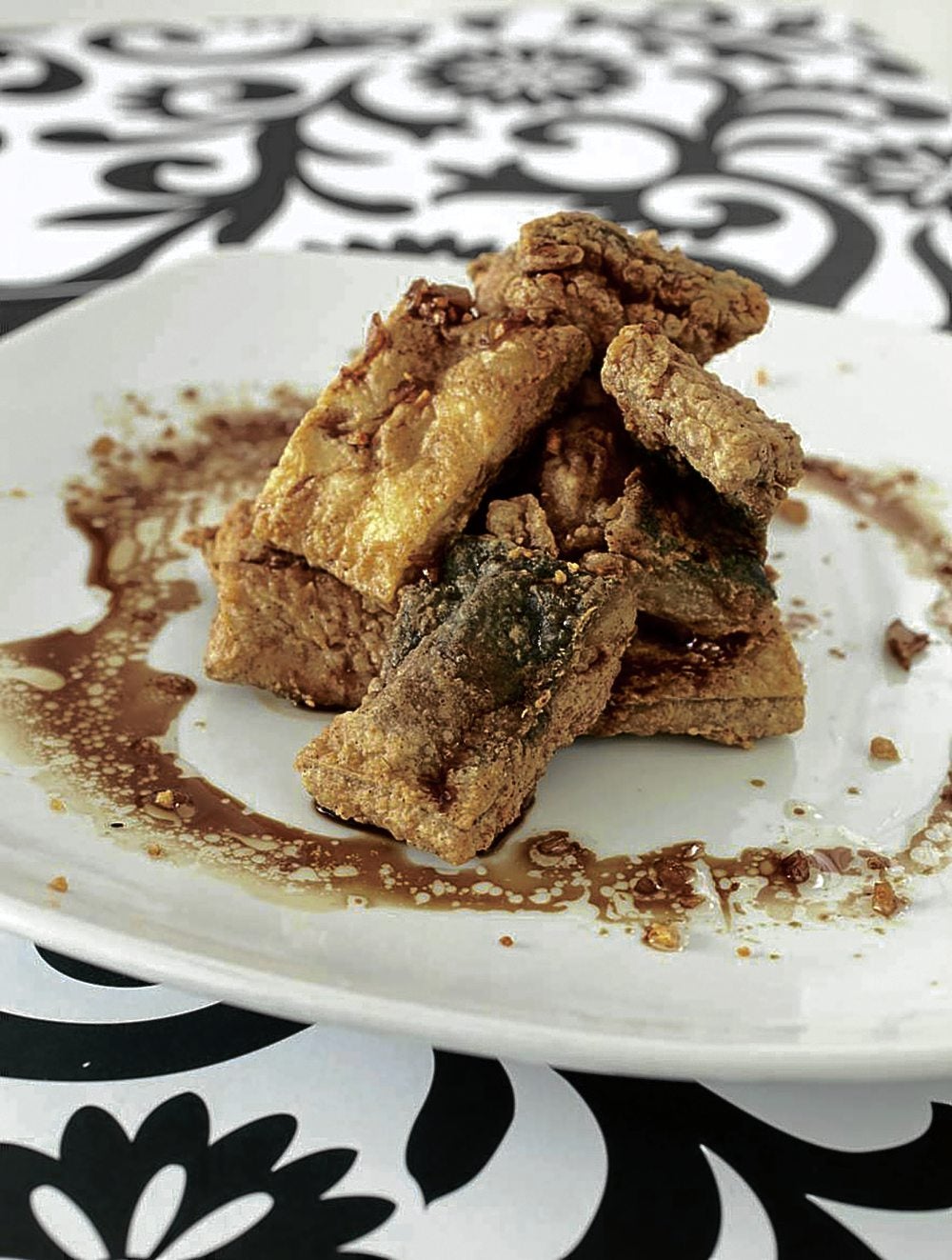 I arrived on a late Wednesday night and immediately basked in the posh, monochromatic black-and-white-themed restaurant, pristine amidst the other establishments lining up Jupiter Street in Makati.

It is Romulo Café’s second branch, and the satisfying answer to the clamor of foodies in Makati wanting easier access to this well-visited restaurant, which first opened in Morato, Quezon City. This branch retains its signature Ivy Almario-designed interiors, cleverly infused with details of the Romulo household itself.

The pattern of the Romulo home’s wrought iron gates, for instance, is echoed in the damask pattern-painted walls and the wood beams on the ceiling at the bar room. The restaurant is like a time capsule, allowing us to stand right between the past and the present. The walls are lined with black-and-white photographs of Carlos P. Romulo, one of the greatest diplomats and statesmen who had ever lived.

The wait staff are very attentive, attending to you with the grace of five-star restaurant staff minus the stiff demeanor. An elegant menu was presented to me, and I was impressed by how much information the black book had to offer. With pictures and a concise narration of milestones in Carlos P. Romulo’s life, the menu immediately made me feel that I was being invited into the intimate circle of this distinguished family, with their “heirloom recipes” and traditions.

Today, it is Carlos P. Romulo’s granddaughter Sandy and her husband Enzo who are sharing with the present generation the delectable food that this remarkable diplomat and his brood enjoyed in their many family gatherings. On the menu, they say that their goal is “to honor our grandparents and to serve delicious food people really eat: the food we call comfort food.”

On a wall is a picture of a lone woman dressed in a terno, a serene expression on her face.  From the menu, I learned that the woman is Virginia Romulo, the first wife of Carlos P. Romulo. It was lola Virginia’s Chicken Relleno that put the restaurant on the map. But before this, her excellent table made the Romulo parties famous and anticipated not only by family members, but also by government officials and even foreign dignitaries.

Sandy recalls her grandmother as the type who let her husband have the spotlight and preferred to orchestrate from behind the scenes. Despite the demands of her husband’s work and their many postings abroad, she brought their home with them by recreating Filipino dishes wherever they found themselves living at the moment.

Virginia was a former Carnival Queen of Manila, and Carlos courted her for two years. During the courtship, he was based in Manila, and she in Pagsanjan. He would travel every Sunday, a three-hour drive, for a chance to have a glimpse of her in church, in hopes of catching her attention and gaining her favor. Even when Carlos was tasked to be part of the Philippine Independence Mission, requiring him to travel abroad on long periods, he managed to send gifts to Virginia from every port he traveled to.

The pursuit finally paid off, and the couple was married on Virginia’s birthday, July 1, 1924. They had their honeymoon in Baguio. Carlos was a stickler for success and lived life believing that the quality of a man was measured by the quality of the work he was determined to contribute to the world. His beliefs and his mission brought him to different places in the world, and it required a partner who was as selfless and as giving as he was.

The Romulo couple were together for 17 years, until the war forced them apart for three years. By this time, Virginia’s strength and character had provided the family with a strong foundation—one that can be gleaned from their current descendants.

Their grandchildren now aim to share and live out the family legacy that they were blessed to be born into. This include fond memories of Sunday luncheons eating kare-kare and adobo with fruit salad—the salad as a side dish and not a dessert; and sucking on “Caramellos” (sugar cubes) dipped in water and then sucked on like a lollipop.

Ice cream was also always part of the fare. The grandchildren remember their lolo as having a sweet tooth, and their lola never failing to provide them with the necessary treats for this Sunday tradition.

Lola Virginia’s love for her family was best channeled through what she did best—cooking. And Carlos P. Romulo expected perfection because he expected no less from himself. That, incidentally, is what you get when you now dine in the restaurant named after him, and are attended to by such a gracious wait staff.

Romulo Café definitely provides the satisfaction of home-cooked meals, but all presented in inventive ways, such that every dish served is like tasting Filipino food for the first time.

The Tokwa’t Baboy is a work of art, with big cubes of tofu topped with minced pork. The Sinuglaw, a Filipino-style tanigue sashimi, is served with grilled pork on top and soaked with spicy vinegar. The Cheese And Vigan Longganisa dumplings, meanwhile, are very tasty.

While the restaurant boasts of traditional dishes such as kare-kare, the famous Chicken Relleno and the must-try Ginataang Adobong Manok, less well-known dishes like the Bangus Al Ajillo hold their own. Vegetarians would be happy to know that healthy offerings—such as the starter called Lianna’s Bananas, an ingenious creation of cooked bananas on a bed of greens topped with crisps—are available.

Cap off your feast with sweet treats such as Suman sa Latik. All the servings are for sharing, perfect for family gatherings.

Truly, no history lesson could ever be quite as sumptuous as a dining experience in Romulo Café.

Romulo Café is at 148 Jupiter St. corner Comet, a block from Reposo. It is open Mondays-Sundays for lunch, 11 a.m.-3 p.m., and dinner, 6-11 p.m. Dinner time is when it is busiest, so call for a reservation at tel. 4786406. Functions and parties are welcome with customizable buffet meals. In-house AV and audio equipment are also available. The restaurant has three flexible seating areas. Valet parking is available.