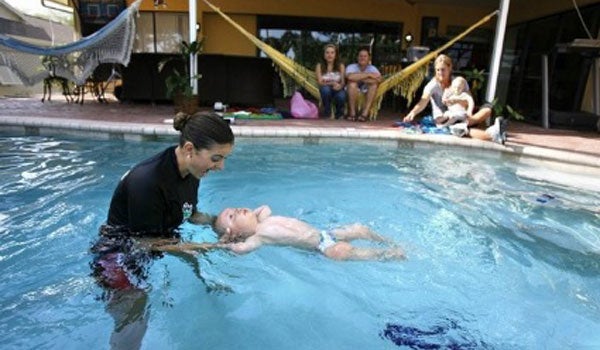 US babies learn ‘self-rescue’ from drowning

DALE CITY—Some see it as a potential life-saver, others as tantamount to child abuse: controversy is brewing in the United States over “self-rescue” classes to prevent babies from drowning.

Victoria timidly floats on her back in a swimming pool not far from the US capital, Washington. If she moves too much she will swallow a mouth full of water. Victoria is 10 months old.

Wearing a pink one piece swimsuit, the little one comes to Infant Swimming Resource (ISR) meetings Monday through Friday to learn a controversial method of drowning prevention for children as young as six months old.

“At the beginning, she was a little fussy, but she got used to it very quickly,” said 31-year-old Sara, whose daughter can now turn herself over in the water and float flat on her back. “It takes a lot of dedication but it is definitely worth it. I know she can save herself.”

Each day, mother and daughter drive two hours to the Dale City pool in Virginia, where Katie Smith teaches the technique during 10-minute courses spread over four to six weeks.

The “self-rescue” method, designed to teach a child who accidentally falls into the water to roll onto his or her back and float, is taught in the United States and 11 other countries, according to company website infantswim.com.

At 20-months-old, Evan can swim underwater and kick his feet to turn face up and breathe. “The first times he cried but because he was doing something new. Now, he cries when he gets out of the water!” said his mother Wendy.

“I still watch her, but if I turn away I am not so nervous,” said 37-year-old Amy, mother of four-year-old Gaby.

But the method has its detractors.

“Some of the techniques that anyone can see on the Internet right now could and should be viewed as, at the very least, child abuse,” said Jim Reiser, an instructor who preaches a gentler approach to child swimming.

Reiser was appalled watching the YouTube video “Lincoln in ISR“, which shows an instructor letting a one-year-old repeatedly sink into a pool, pulling himself up and catching his breath between swallowed water and tears.

“I had to turn it off,” Reiser said. “I was in tears and sick to my stomach. Imagine what the child was thinking but couldn’t verbalize because he was too young. If the teacher was doing that to an adult, the adult would think the guy was trying to kill him.”

When AFP contacted the mother of the child featured in the video, Jennifer Feagans, she said 4-year-old Lincoln now “adores” the water. “I know that video of Lincoln is hard to watch but he is an amazing swimmer now,” she said.

Richard Lichenstein, a pediatric emergency medical physician at the University of Maryland Hospital for Children in Baltimore, Maryland, does not recommend the method.

“The technique does not teach a baby to swim nor can it be conclusively proven that it teaches an infant to survive,” he said. “Worse it may give a parent the false sense that their child will not drown or knows how to swim.

“Infants can become hypothermic from exposure, get water intoxication from swallowing water and develop gastrointestinal and skin infections. There are risks associated with infant swimming,” Lichenstein added.

In 2007 there were 525 accidental drownings among infants from one to six years old, according to the American Centers for Disease Control and Prevention.