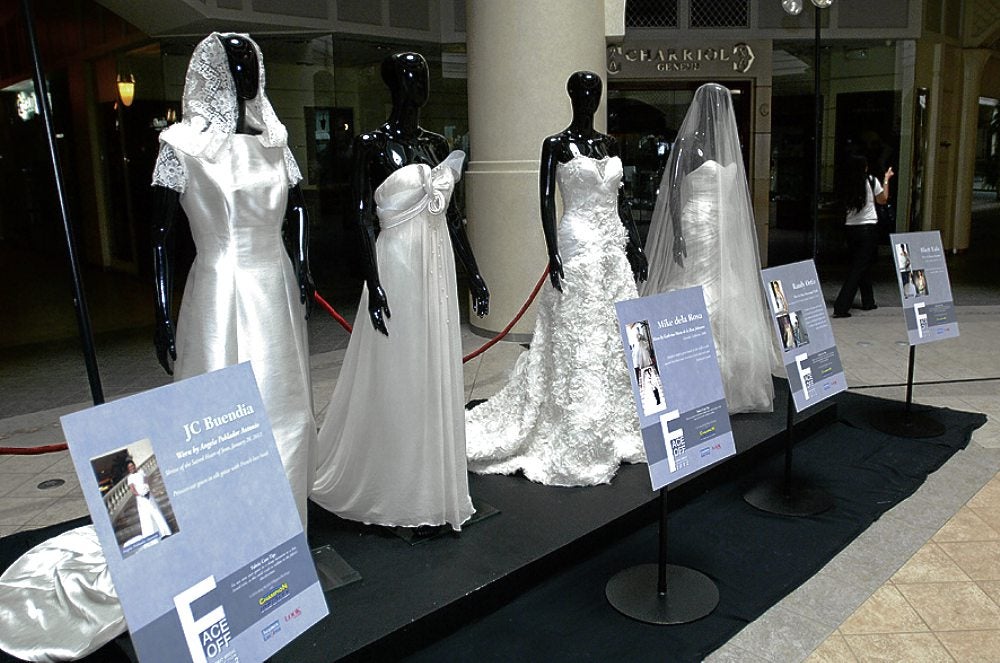 Last week’s Face-Off Filipino Bridal Collection 2012 was as much a look at brides of the future as it was a glimpse of brides from the past.

The ongoing exhibit is on its last day today at Power Plant Mall at Rockwell, where it moved from Dusit Thani Manila. (Face-Off fashion show was held at Dusit last Sept. 5.) The Rockwell exhibit also displays the flower arrangements and table setting of event organizer Jo Claravall.

Added at the Rockwell exhibit were two iconic gowns designed by the trailblazing designer, Salvacion Lim Higgins, the founder of Slim’s Fashion School. One gown was designed for a 1974 shoot of supermodel  Anna Bayle—a white draped jersey. The other gown was for a show in the Middle East—an Arabian-inspired draped gown in gold lurex jersey.

Some of the gowns, like those of Farrales and Moreno, had been featured in bridal shows. The rest of the pieces were worn by real brides, including Bianca Brandner for Eala; Angela Poblador for Buendia; Mananquil for Randy Ortiz; Katherine Marie dela Rosa Johnston for Mike dela Rosa; and Fegi for Rodriguez.

Moreno displayed the wedding gowns of Roces and Mariter Jalandoni Macapagal. The two dresses couldn’t have been more opposite in their styles.

Romance written all over it

While Roces’ gown was a partially beaded minimalist number with a Spanish mantilla-inspired veil of French lace that doubled as a train, Macapagal’s gown had romance written all over it, with its floral motif and embellishment of pearls and sequins.

Cordero’s piece was made of silk linen with re-embroidered lace in various shades of silver and gray. The skirt had a semi-bouffant silhouette, taffeta-lined bustle train and petticoat with black lace.

For Fegi, Rodriguez fashioned a 1950s-inspired number with a serpentine silhouette made of fully beaded Chantilly lace with a detachable beaded tulle under-blouse and taffeta train.

The exhibit also has its share of iconic pieces, such as Farrales’ sampaguita-inspired piña gown with a visible petticoat adorned with cultured, hand-embroidered pearls. When the veteran designer presented the gowns in shows here and abroad, he embellished the look with dozens and dozens of delicate white flowers strung together and cascading from the model’s parasol.

To give visitors an idea how the brides looked during their special day, organizers also added sepia-toned photos of them in their bridal regalia. Guests, for instance, saw a young Roces exchanging wedding vows with the late actor Fernando Poe Jr. one fine day in 1968. Alex Y. Vergara