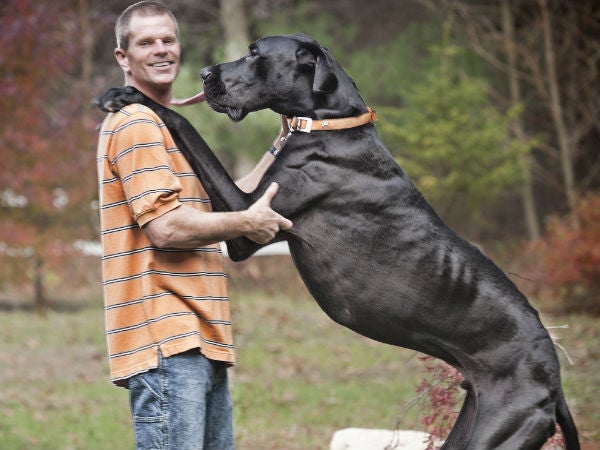 Tallest ever dog revealed in new Guinness Book of Records

LONDON—A Great Dane who towers 2.2 meters (7 feet 4 inches) on his hind legs is named the tallest dog ever recorded in the latest Guinness Book of World Records launched on Thursday.

The giant canine from Michigan in the United States eats an entire 14-kilogram (30-pound) bag of food every day and weighs in at 70.3 kilograms, the 57th edition of the global records book says.

Measuring 1.12 meters (44 inches) from paw to withers — the point between the shoulder blades at which the official height of a four-legged mammal is judged — he is officially the tallest dog ever recorded, the volume claims.

‘Guinness World Records 2013’ says the humongous hound breaks the record of Giant George, another Great Dane who is one inch shorter.

“The most common thing people ask is: ‘Is that a dog or a horse?'” says the three-year-old’s owner Denise.

“We had to get a van to be able to transport him, oh, and if he steps on your foot he leaves bruises!”

The book — the latest edition of the world’s best-selling copyrighted series — also names Oklahoma Sam, a four-year-old American Mammoth Jackstock, as the tallest living donkey on the planet.

The four-year-old record-breaker lives in Watsonville, California, where she shares her one acre of land with a macaw, duck, goose and four cats.

The new book, which claims to reveal “the latest and greatest records in the universe”, recognizes the world’s shortest woman as 18-year-old Joyti Amge from the central Indian city of Nagpur.

The book bestows the title of the world’s oldest gymnast to 86-year-old Johanna Quaas, born on November 20, 1925 and a regular competitor in the amateur Landes-Seniorenspiele competition in Saxony, Germany.

“I do think I could be seen as a role model,” Quaas said.

Wouter van den Bosch, creator of the Guinness World Records heaviest rideable bicycle at 750 kilograms (1650 pounds) said: “Once I got this tyre, I started thinking about what I could make with it.

“I was already planning on making something I could move myself, so I went and saw some pictures of the old Penny Farthing, and well, the idea was born.”

The Guinness Book of World Records, first published in 1955, has sold more than 120 million copies to date in 22 languages and in over 100 countries.