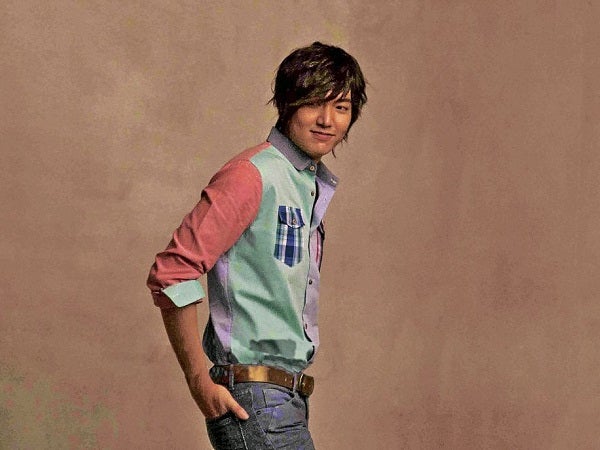 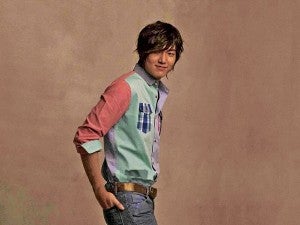 As of last count, Korean actor Lee Min Ho has 60 pairs of shoes and a huge number of coats in his closet. He may need some of those shoes soon, but the coats are probably useless when he visits the Philippines before the year ends, as one of Bench’s newest Korean endorsers.

“I love to buy nice coats,” Lee, wearing a pair of polka-dotted Chucks, skinny blue jeans and a dark gray cardigan worn over a teal cotton tee, said in Korean through an interpreter. “I also love to collect distinctive pairs of shoes. What you see right now is my casual look. It’s how I dress on most days.”

After the Philippine market’s warm reception to Korean stars Dong Hae and Si Won, Bench has signed up Lee, star of such hit TV dramas as “Boys Over Flowers” and “City Hunter,” as its latest endorser. The Manila-based global brand sent a team of publicists and stylists to Seoul sometime in June to oversee Lee’s shoot.

His image will soon be splashed all over the Philippines through billboards, print ads and in-store collaterals for Bench apparel and Bench Fix hair-care and styling products.

“I’m looking forward to visiting Manila for the first time,”  said Lee, 26, who’s currently shooting another TV drama titled “The Fate.” “I heard that I have a lot of fans there.”

Ben Chan, CEO of Suyen Corp., sees in Lee an ideal endorser for a “global” brand such as Bench. Although he’s more of an actor than a singer, Lee, with his slim build, clear skin, tousled hair and boyish smile, typifies the K-pop music genre that has become a worldwide phenomenon.

“K-pop is a subculture among the youth that speaks a lot about how borderless the world has become,” Chan said in an emailed interview. “It’s an ideal vehicle for Bench because it’s a global brand that believes in a borderless world. We aspire to be identified with the K-pop phenomenon because we share the same youthful energy.”

Getting a popular Korean celebrity, Chan added, also mirrors, in a way, the current influx of Koreans to the Philippines either to live, work, study or retire here. Their presence have grown through the years, quietly contributing to the country’s economy and invariably mixing with its culture.

“Having Lee Min Ho as our endorser is a nod to Filipino-Korean cultural relations. We’re recognizing the fact that it’s not just local celebrities, or Western celebrities that influence our pop culture— it’s also Asian stars. They say the 21st century is the Asian century, and I think this is true.” 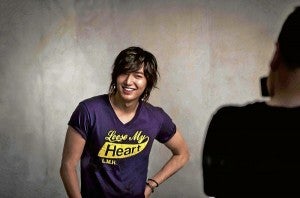 Getting an ideal endorser isn’t just a matter of signing up someone who’s quite hot or popular, said Chan. Bench is also constantly on the lookout for interesting personalities with a broad appeal.

“Such an approach makes the Bench global vision more total, more complete,” he said. “It means that a European, American, Japanese and even a Korean can be a Bench model as long as the chemistry is there. There’s a certain kind of magic in knowing that anyone in the world can be a Bench ambassador because of his or her genuine connection with the brand’s spirit.”

Lee may be on his way to becoming a global star, but he continues to toe the line his handlers have set when it comes to answering certain questions. Details of his love life, for one, are off limits to media, as are certain points of his Bench contract.

Chan revealed that the contract is initially set for one year, and it involves everything except TV commercials. He declined to confirm if the deal includes Lee posing in Bench Body’s underwear.

“You’ll just have to wait and see,” he said.

Lee learned how popular Bench is in the Philippines only after signing the contract. But he already liked the brand even before he and his group inked a deal with Suyen Corp.

“I like Bench because it’s very casual yet stylish,” he said. “Especially now, after wearing several sets in the course of the photo shoot, the style Bench offers is really one of the styles I prefer.”

Lee has tried 12 different looks, including pairing colored and skinny jeans with basic tees and shirts. He cites the product for its versatility and broad appeal, which are perfect for relating to a bigger audience.

“I don’t wear colorful jeans all the time, but when the occasion doesn’t require me to look formal, I have no problems wearing one,” he said. “Bench’s latest looks are perfect on a sunny day, especially when I feel like going to the theme park.”

Although he’s partial to black, Lee doesn’t mind wearing “pretty” colors. He prefers “casual and clean” styles such as knitted shirts and cardigans over punk or grungy looks. Unlike a good number of stars these days, Lee isn’t dependent on a stylist.

“But I have a stylist with me whenever I go shopping for clothes,” he admitted. “It helps to have a second opinion.”

Lee has also noticed the same growing confidence and independence among men when it comes to fashion. Men, these days, he said, have become more concerned about their looks and the styles they wear. Unlike in the past, most men aren’t as shy anymore in paying attention to themselves and their appearance.

As for his career, Lee welcomes various roles and show biz projects that may come his way. He doesn’t have any specific plans right now, but he has promised himself to give every project he’s involved in his best.

“I’m still young, and my priority is to focus on being a better actor,” he said. “And part of being a good actor is to be open to different types of roles. I also welcome and value suggestions from friends and fans.”

It doesn’t take much to please Lee either. His idea of a perfect day may not sound as exciting compared to his public persona as an intense and driven individual who never fails to attract the ladies.

“When I don’t have any show biz commitments, I try to make up for lost sleep until I’m not sleepy anymore,” he said with a wide grin. “To me, an ideal day is sleeping 13 to 14 hours.”