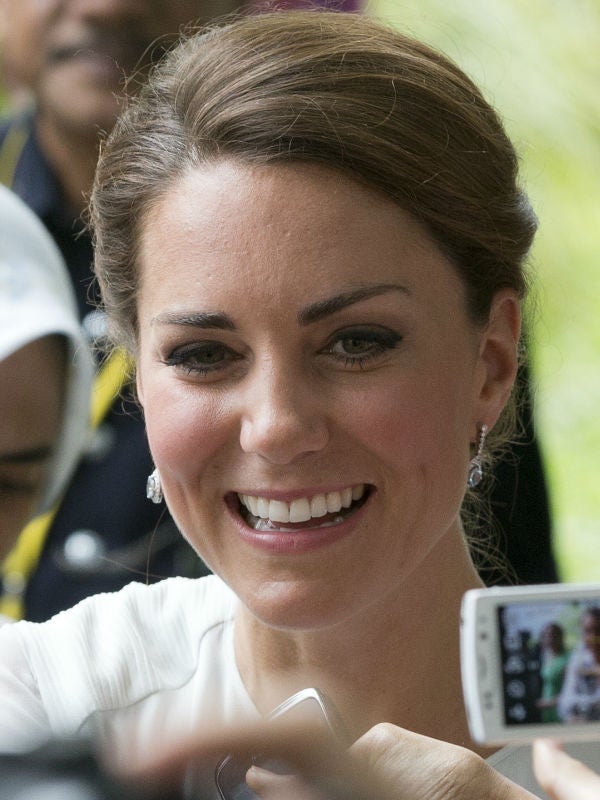 LONDON — Prince William’s wife Catherine on Saturday faced growing embarrassment over topless photos after an Italian magazine said it would follow its French sister publication in printing them.

The British royals launched legal action on Friday against French magazine Closer — which is part of the media empire of former Italian prime minister Silvio Berlusconi — after it published paparazzi snaps of Catherine sunbathing with her husband.

The royal family may have hoped to contain the scandal by swiftly suing Closer — but Chi, an Italian weekly also published by Berlusconi’s Mondadori Group, announced late Friday that it plans to print a special issue on Monday devoting 26 pages to the candid pictures of the former Kate Middleton.

The pictures were taken while she was on holiday with her husband, the second-in-line to the British throne, in France this month.

Closer’s editor Laurence Pieau was quoted by British tabloid The Sun on Saturday as saying her magazine had more pictures that it had not printed yet.

“Intimate pictures exist that we haven’t published and will not publish,” she told the newspaper. “Probably other newspapers will choose to publish them.”

A version of the front cover of Chi showed some of the photos with the headline “The Queen is Naked!”

“The fact that these are the future rulers of England makes the article more interesting and topical,” editor Alfonso Signorini told reporters.

“This is a deserving topic because it shows in a completely natural way the daily life of a very famous, young and modern couple in love,” he said.

Closer is published under a licensing agreement between Bauer Media and Mondadori, which bought the title in 2006.

Berlusconi, who part-owns the Mondadori Group, is himself no stranger to scandals involving revealing photos taken by paparazzi.

He launched legal action against the Spanish newspaper El Pais in 2009 over pictures of topless women lounging at his holiday villa.

William and Catherine, both 30, are suing Closer for invasion of privacy over the pictures, which show Catherine sunbathing in just her bikini bottoms by a pool and William rubbing suncream into her bottom.

The images evoked memories of the press harassment of William’s mother Diana, who died in a 1997 car crash as she was pursued through Paris by paparazzi.

William is believed to blame the paparazzi for his mother’s death.

Palace officials said the royals, who are currently visiting Malaysia, considered the pictures published by Closer to be a “grotesque” breach of privacy.

“Their Royal Highnesses have been hugely saddened to learn that a French publication and a photographer have invaded their privacy in such a grotesque and totally unjustifiable manner,” their office at St James’s Palace said.

“The incident is reminiscent of the worst excesses of the press and paparazzi during the life of Diana, Princess of Wales, and all the more upsetting to The Duke and Duchess for being so.”

Later, the royal family confirmed that “legal proceedings for breach of privacy have been commenced today in France by The Duke and Duchess of Cambridge against the publishers of Closer Magazine France”.

Pieau has insisted Closer has no regrets about printing the pictures.

“These photos are not in the least shocking. They show a young woman sunbathing topless, like the millions of women you see on beaches,” she told AFP.

In one of the shots, the couple are laughing as they lounge in chairs near a folded red parasol. In another, Catherine holds the top of her bikini across her chest, either taking it off or putting it back on.

Closer said the pictures were taken on the terrace of the Autet Chateau in Provence, southern France. The magazine said the chateau is owned by Viscount Linley, the son of Queen Elizabeth II’s late sister Princess Margaret.

The palace said the royal couple “remain focused” on their tour of Singapore, Malaysia, the Solomon Islands and the tiny Pacific island of Tuvalu to mark the diamond jubilee of William’s grandmother Queen Elizabeth II.

The pictures are a further headache for the royal family, following the publication last month of nude photos of William’s younger brother Harry in a Las Vegas hotel.

Comparing the pictures to those of Harry cavorting naked with a mystery woman as he played strip billiards, the magazine said: “Here there is no question of alcohol, of strip billiards or compromising positions, but simply a spouse at ease with her body, who has nothing to hide from her husband.

“Moments of grace, of complicity. Of love in its purest. Images of cloudless happiness.”

Rupert Murdoch’s top-selling British tabloid The Sun, the only British paper to publish the pictures of Harry, said it would not print the photographs of Catherine, and there was no sign of any other British publication doing so.

“The Sun has no intention of breaching the royal couple’s privacy. The circumstances are very different to those relating to the photos of Prince Harry in Las Vegas,” editor Dominic Mohan said.