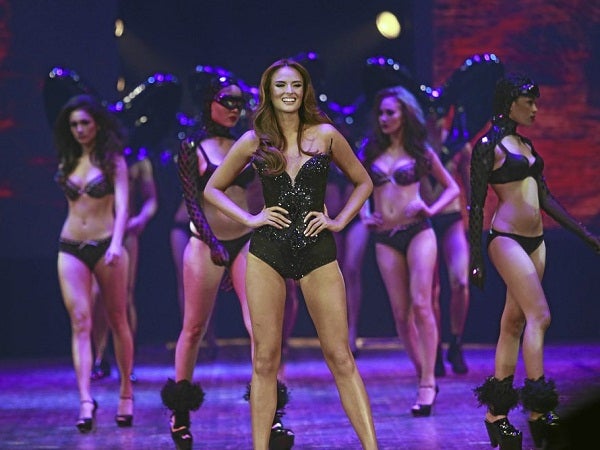 Ben Chan’s conquest of the universe

Dubbed “Bench Universe,” the two-night show marking Bench’s 25th year was in keeping with the vision of and tradition started by Suyen Corp. CEO Ben Chan of producing a biennial fashion-cum-flesh-baring extravaganza that began early in the new millennium.

As in years past, the show, directed and choreographed again this year by Robbie Carmona, with overall direction by Johnny Manahan, featured some of the hottest celebrities around, including boxer Manny Pacquiao and wife Jinkee, and Bench’s first and iconic model, Richard Gomez.

Looking dignified in a gray suit with one sleeve in red, Gomez didn’t wear skimpy underwear this time, unlike in past shows.  An early high point of the show was when the first Bench TV ad showing Gomez rowing was run on the giant screen—this was a seminal moment in Bench’s marketing. Gomez was Bench’s first major celebrity endorser.

With the absence of perennial stripper Wendell Ramos, on-screen bad boys Jake Cuenca and Paulo Avelino gladly did all the disrobing this time—to the crowd’s delight.

Cuenca was in his element as he titillated the crowd with a series of provocative, raunchy poses before unsnapping his orange briefs to reveal a much skimpier pair of beaded black undies. The crowd, especially at the sight of his rear, went wild.

But the loudest cheers were reserved for Coco Martin, lead star of the TV soap “Walang Hanggan,” who appeared in the show’s finale. And unlike Cuenca, Martin didn’t have to strip to his undies to bring the crowd to a frenzy.

Although looking hunched at first from all the weight of his load—a series of metastasized deer horns wrapped in teal fabric—Martin roused the audience as he struck various king-of-the-world poses wearing worn jeans and sleeveless top.

Actresses Kim Chiu, Bea Alonzo and Lovi Poe also had their fair share of admirers, but the cheers they generated from the crowd paled in comparison to those given the boys, who included Aljur Abrenica and Dingdong Dantes.

Apart from moving from the Araneta Coliseum in Quezon City to its newer, bigger venue, the latest edition of the Bench special featured American imports, including models Allison Harvard and Dominique Reighard, and Los Angeles Asian-American hip-hop band Far-East Movement.

Just like two years ago, Bench flew in a dance group from LA, as well as Filipino fashion designers based in the Middle East—Michael Cinco, Furne One and Esra Santos.

Cinco did a nearly all-black suite he dubbed “Fearless.” His inspirations, he said, were animals and insects that strike fear in humans. He used such materials as fiberglass, ceramics, visors and nets. He covered most of the models’ faces with visors to emphasize their bodies and underwear.

“I want to show the beautiful side of these fearsome creatures in a couture way,” said Cinco in an e-mail interview. “Like the hooded cobra in fiberglass headdresses, laser-cut mirror in crocodile skin patterns caressing the women’s arms and the tarantulas, which looked like soldiers in armor made of strips of plastic.”

The concept had its pluses and minuses. While the mosh pits gave select audience members the space to snap pictures and see the show up close, the stage was too high for the first and second rows of the patron section.

The surprise element offered by a multilevel, multidimensional stage used in past shows was also sacrificed in favor of space. Except for the lit, overhead canoe attached to a harness carrying Enchong Dee, the performers’ comings and goings became rather predictable.

Although such a setup gave dancers more room to maneuver, it also made it a bit harder for the audience to focus their attention on certain details.

This became evident especially at the end of each segment, when all the characters, including the stars, emerged on stage. At some points, the show had too much going on, amplified in no small way by the basketball court-size stage.

“Bench Universe” lived up to its title: vast, sprawling, ambitious, but also beautiful and at times swinging from glorious to ordinary due to its sheer scale and occasional randomness.