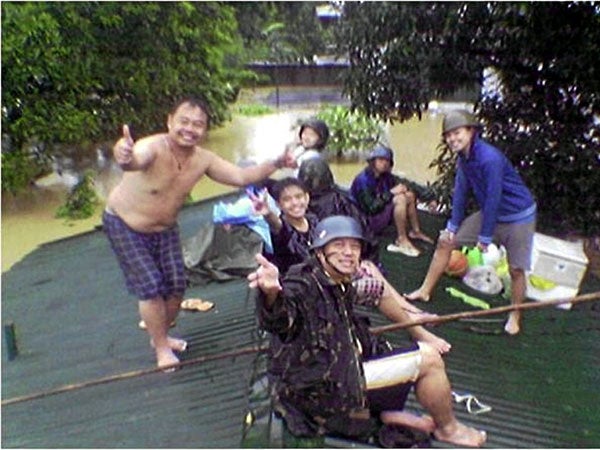 Stranded: The Cabason and Martin families find refuge on the roof at the height of “Ondoy’s” flood

Amaris Cabason, 23, daughter of  Marivi Martin-Cabason, has a recurring nightmare. In her dream, she is on the rooftop of their house in Provident Village, Marikina, shivering and wet under lashing rains. She gazes in horror as filthy floodwaters creep up higher and higher around her feet. There is nowhere to run, nowhere to hide.

Two years after typhoon “Ondoy,” this dream still haunts her.

In 2009, “Ondoy” cut a swath of destruction across 25 Luzon provinces and brought the worst flooding in Metro Manila in 20 years. For the first time since Marivi and her husband Alex settled in Provident Village, Marikina in 1990, the flood waters rushed into their elevated driveway. It was about 11 a.m and Alex called to his four children to run to the two-story house of his brothers-in-law Manny, Luis and Daniel who live in the same compound.

Wading back and forth in the muddy water, Alex and the children carried to the second floor whatever they could haul, including a newly bought TV set. But the onrush of water was too fast. Alex recalls, “When I came back for the fourth time, that was just in 25 minutes, the water had risen from the driveway almost to the top of the front door.” Last to climb to the second floor in neck-high water was Luis, who is six feet tall.

When water started flowing into the second floor at 2 p.m., the group crossed one by one on a plank from the second floor window,  stepping on the branches of a mango tree onto the roof of Alex and Marivi’s one-story house. The flood waters crept steadily over the edge of the roof. Helpless and pelted by the relentless rain, the family could only pray. Alex notes wryly, “The faster the water rose, the faster we prayed the Our Father.”

They stayed on the roof for three hours and decided to return to the big house through the mango tree plank, breaking through a plywood wall into the attic. There they stayed until morning when the waters receded and help came with a Red Cross rescue boat.

The damage to their homes was so extensive that they had to embark on a massive rebuilding, mainly of the now warped ceilings and floor. They would have left Provident Village but for financial constraints. Taking out several bank loans, Marivi and Alex had home repairs done at a cost of P100,000. They shelled out another P40,000 for repairs to their battered car. Manny and Luis spent P300,000 to replace with cement the wooden flooring on their second floor and install a window in their attic. Luis explains, “Now we’ll be able to see the weather condition and the flood water from the attic.” 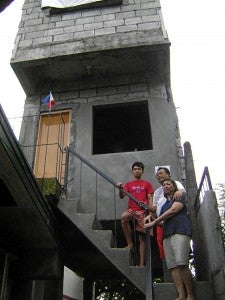 “Ondoy” affected not just the homes and finances of the couple and the brothers, but also the health of their family. A week after “Ondoy,” Luis, who was unable to stock up on his medication during “Ondoy,” suffered a heart attack. Now he makes sure he has extra medical supplies for his heart condition. Shortly after “Ondoy,” his niece Amaris suffered amebiasis. Since then, Marivi has used only bottled drinking water for the family.

Two years later, memories of “Ondoy” flared again when typhoon “Falcon” dumped rains that pushed the level of the Marikina River to 16 meters. This time, the Cabason and Martin families of Provident Village were ready.

Last year, Marivi and Alex built what they call a three-story emergency structure on their compound, with design features intended to withstand another storm of “Ondoy” proportions. The second floor alone is 14 feet above the ground, higher than the highest level of the “Ondoy” flood waters. The second floor has an area of 3.5 by 8 meters. The third floor has an area of about 4 by 8 meters. The structure is made entirely of cement, including the ceiling, to prevent water seepage. On the third floor, the family has stashed their most important documents, encased in plastic bags and water-proof plastic boxes. Alex adds, “If the worst happens, we can still go to the roof.”

The second level of the building is almost adjacent to their old house so that the Cabasons can easily jump from one structure to the other.  It is also near enough Manny’s and Luis’ house to enable the brothers to cross on a plank from a second-floor window.

The family has fashioned two makeshift rafts made of liter-sized softdrink bottles lashed together. They have made other rafts from pieces of styrofoam bound in plastic trash bags as flotation devices. The shelves in the second floor are filled with supplies of water, canned food, rubber boots, flashlights, batteries, matches, candles, flatware, dinnerware, utensils and whistles. When the store of food is depleted, it is immediately replenished. During “Ondoy,” the househelp managed to grab the rice cooker and some food, so the family was able to eat until morning. They were even able to throw some food over to nearby hungry neighbors stranded on rooftops.

Like other Marikina residents, Alex now monitors the river’s level during heavy rainfall. The Marikina government has issued guidelines for residents. At each critical level, a siren sounds to alert the people.

Explains Alex: “If the level is 12 to 14 meters, people living near  the river in Malanday, Nangka and Tumana are subject to forced evacuation. These are the lowest parts of Marikina. They have to heed the forced evacuation signal.  Here in Provident, if the water reaches 17 to 18 meters, there’s forced evacuation.”

The entire Cabason family has strict instructions for future disasters. In heavy rainfall, all members are to stay where they are. Outside the home, this means the school or the office. If they have cell phones with enough power and load, they are to contact their closest relatives in Pasig and Quezon City. Their first place of refuge is my home in Antipolo, about 6 kilometers away. If possible, they are to use landlines to save on cell phone power and load.

If they are at Provident, they are to evacuate once the Marikina River level reaches 17 meters. If evacuation is impossible, they must flee to the emergency structure. Each family member has three days’ worth of clothes packed in bags. During “Falcon,” Alex drove his family to my house and then parked the car on Katipunan Avenue. Manny parked his van in front of my home.

As a Martin sibling, I now officially have a part in the Cabason and Martin family disaster preparedness plan, a plan which, I must say, they executed with admirable speed and calm during typhoon “Falcon.”

Other families in Provident and flood-stricken areas in Luzon have put in place similar contingency measures. Some have taken condo units or a second house, or made arrangements for evacuation with families and friends. Others have built their own emergency structures. My friend Jackie Maniquis, whose family has lived in Provident Village for decades, has life vests on standby, while her next-door neighbor and cousin has a boat.

The lessons of “Ondoy,” learned amid such pain, death and destruction, have brought out the ingenuity and the resourcefulness of the Pinoy. Indeed, the Pinoy spirit remains unsinkable.