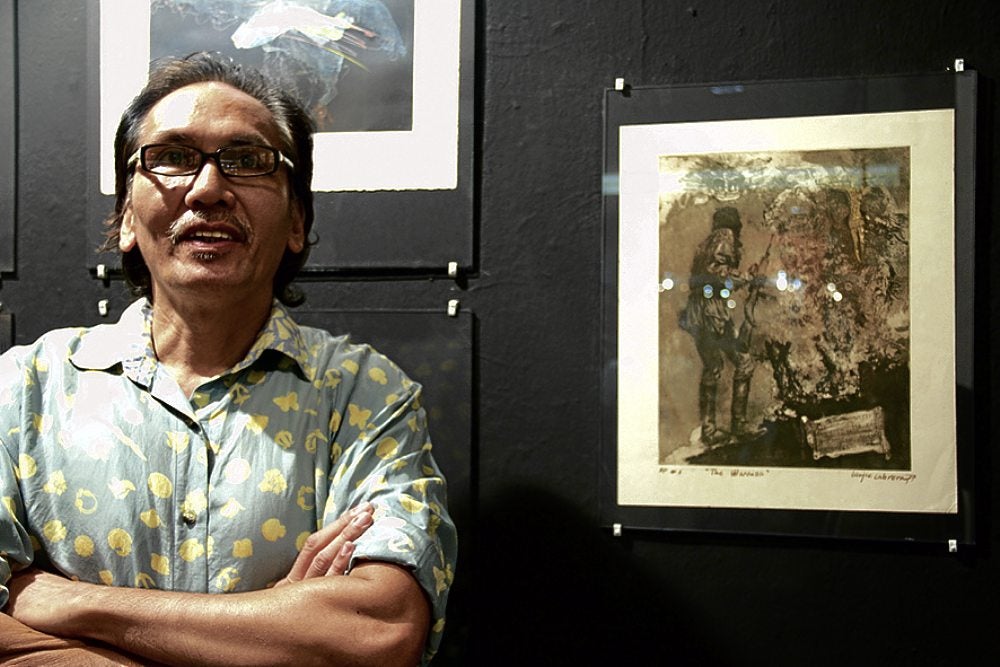 ‘Papelismo’ artists show why their medium is premium

There is potential vigor and unheralded energy in the weightlessness and unassuming quality of paper as an art medium. And this is what five veteran artists seek to prove in “Papelismo: Artworks in Paper” in Crucible Gallery at SM Megamall.

“Its concept is anchored on the fact that paper is the popular medium,” said curator Renato Habulan. “It reaches a lot of people. Paper is democratic; it is relatable.”

The collaboration of printmaker Benjie Torrado Cabrera, book illustrator Arnel Mirasol, photojournalist Pinggot Zulueta, and painters Fred Liongoren and Habulan is their response to how their beloved medium is demeaned among the art mediums.

In the Philippines, art on paper has become second-class because the material is considered highly perishable, lessening its overall appeal to art enthusiasts and collectors. In effect, it is difficult to market.

But “Papelismo” disproves the alleged fragility of the medium as most of the artworks on display were made in the ’80s and ’90s, but show no signs of aging.

“Exhibits must have impact on the viewing public, not only by showing your craft or skill, but by providing a platform for your advocacies as well,” Habulan said. “This is all about popularizing the popular medium.”

Zulueta fortifies the thesis  with a vast collection of editorial cartoons he did from 1988 to 1991, way before he shifted to photography. For the first time, the photojournalist is exhibiting his works as an editorial cartoonist during the presidency of Corazon Aquino.

“The events during that time kept my mind fertile,” said Zulueta. “Masarap gumuhit noong panahong iyon. I want to impart to the new generation things that happened then.”

Zulueta is proud he’s both a visual artist and a professional photographer. “My medium is the newspaper, in drawing or photography.”

Abstractionist and social realist Liongoren also believes in the far-reaching ability of paper. For him, paper is the perfect venue to “double-speak” and make the artist’s speech comprehensible to the masses.

Liongoren says paper does not only represent the multitudes but also embodies their reawakening from social stupor.

His “Ano ang Dapat?” shows a conversation between President Noynoy Aquino and national hero José Rizal. The latter inquires about the notion of “Ang tuwid na daan” and asks Rizal, “Ano po ba ang dapat?” The artist based this on a quote from a confrontation between Ibarra and Elias in Rizal’s “El Filibusterismo.”

The work imbibes the sketch-like flair of black-and-white comics, softened by a bright orange background that fades to a lighter, fleshy hue at the bottom of the page.

Like Liongoren, Mirasol has also turned to books: He’s a picture-book illustrator. Displayed is a line of children’s books he has illustrated, such as “First around the Globe: The Story of Enrique,” “Tamales Day,” “The Origin of the Frog,” and “Once Upon a Time.”

Also shown is a provocative acrylic-on-paper piece, “Nueva Gomorrah,” a product of his socialist-surrealist phase.

While printmaking might not reach the same level of mass production as newspapers, books or comics, it allows more room for creative multiplication—something that some art-industry members frown upon because reproducibility seemingly makes art less prestigious.

But Cabrera’s intricately detailed, quasi-surreal artworks show no signs of them being less artful just because the pieces are not singular. In fact, print has made Cabrera’s craft more accessible to an ever-growing audience, one that is eager to learn and is not afraid to mature beyond rigid norms.

While flaunting paper as the less intimidating of art media in terms of consumerism, it also shows the role of paper in the artist’s creative process.

Habulan lets the public in to old miniature studies of a mural he was commissioned to work on for Singapore’s St. Joseph Institution in 1986 (now the Singapore Art Museum). The mural portrayed the massacre of the Christian Brothers of De La Salle College by Japanese soldiers in 1945.

Through this archival approach, Habulan was able to share paper’s vital role in the aesthetic evolution of his final work.

“I wanted to showcase the studies and the evolution of the images that played around in my head that time,” Habulan said.

If the mint condition of the works displayed aren’t enough to disprove the so-called weakness of paper, a quick comparison of how other countries are able to keep centuries-old paper artifacts and make them last should settle the matter.

Long-overdue enlightenment on the care of this medium and newfound respect for art on paper might be the key to starting one’s art collection in a relatively cheaper way without sacrificing the art.

While the exhibit effortlessly proved its thesis, Habulan added another reason why art on paper should not be belittled. He explained collectors and institutions from other countries were acquiring artworks on paper. “In 10 years’ time,” he said, “significant artwork in the Philippines will be in other countries if this goes on.”