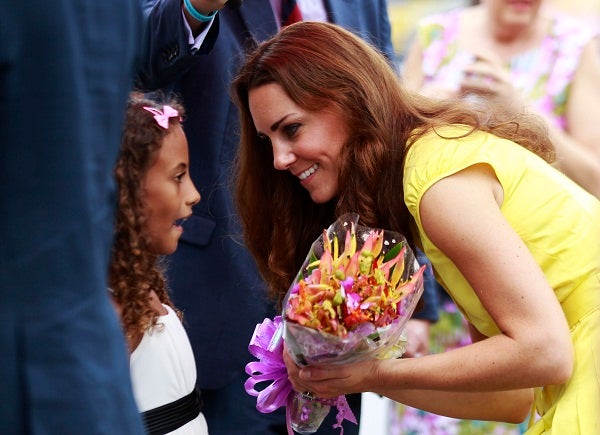 Britain's Kate, the Duchess of Cambridge, talks to a girl during the opening ceremony of the renovated Commonwealth Street in central Honiara, Solomon Islands, Monday, Sept. 17, 2012. Prince William, the Duke of Cambridge, and his wife Kate are on their third stop of a nine-day tour of Southeast Asia and the South Pacific on behalf of Queen Elizabeth II to commemorate her Diamond Jubilee. AP/Daniel Munoz, Pool

ROME— An Italian gossip magazine owned by former Premier Silvio Berlusconi published a 26-page spread of topless photos of Prince William’s wife Kate on Monday despite legal action in France against the French magazine that published them first.

Chi hit newsstands on Monday, featuring a montage of photos taken while the Duke and Duchess of Cambridge were on vacation at a relative’s home in the south of France last month. They included the 14 pictures published by the popular French magazine Closer, which like Chi is owned by Berlusconi’s Mondadori publishing house.

But the Chi spread ran the whole sequence of photos as the couple sunbathed on a terrace, including one shot of the princess putting sun cream on her backside that didn’t appear in Closer.

The couple is hitting back hard against the publication of the images, which William’s St. James’s Palace called a “grotesque” invasion of their privacy.

Later Monday, lawyers for the royal couple are due in court in Nanterre, France, to seek an injunction against Mondadori to prevent further dissemination of the images, which were also reproduced over the weekend by an Irish tabloid. The palace said it would seek damages from Mondadori.

And St. James’s Palace said Sunday that family lawyers would file a criminal complaint against the unidentified photographer or photographers involved. The palace said it would be up to French prosecutors to decide whether to investigate and pursue a criminal case for breach of privacy or trespassing.

Chi editor Alfonso Signorini told The Associated Press over the weekend that he didn’t fear legal action since the photos were already in the public domain following Closer’s publication.