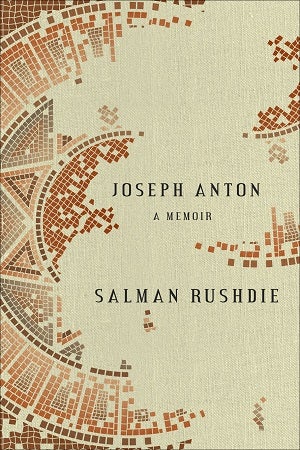 This book cover image released by Random House shows "Joseph Anton," a memoir by Salman Rushdie. Joseph Anton was Rushdie's alias when he was in hiding after Iran's Ayotallah Khomeini called for his death for the alleged blasphemy of "The Satanic Verses." AP/Random House

LONDON—As violent protests over a US-made film rock the Muslim world, Salman Rushdie publishes his account Tuesday of the decade he spent in hiding while under a fatwa for his book “The Satanic Verses”.

With at least 19 people killed in a week of furious protests over the film, Rushdie’s candid memoir of the years spent on the run after he too was accused of mocking Islam, entitled “Joseph Anton”, has an added resonance.

“A book which was critical of Islam would be difficult to be published now,” the Indian-born writer, 65, told BBC television in an interview broadcast Monday.

“There’s a lot of fear and nervousness around.”

Considered blasphemous by many Muslims, “The Satanic Verses”—published in 1988—earned him a fatwa from Iran’s spiritual leader, the late Ayatollah Ruhollah Khomeini, urging Muslims to kill the writer.

His memoir, named after the pseudonym used by Rushdie while in hiding and written in the third person, chronicles the following nine years in which he was forced to move constantly between safe houses under armed guard.

“I am gagged and imprisoned,” he recalls writing in his diary. “I can’t even speak. I want to kick a football in a park with my son. Ordinary, banal life: my impossible dream.”

He chose the name Joseph Anton in homage to his two favourite writers, Joseph Conrad and Anton Chekhov. His bodyguards and protection officers from Special Branch called him simply Joe.

More than two decades later, Rushdie lives mostly in New York after Iran assured Britain in 1998 that it would not implement the fatwa.

But Iran’s current supreme leader Ayatollah Ali Khamenei later reaffirmed that Rushdie’s murder was authorized under Islam— and on Sunday, an Iranian foundation reportedly increased the bounty on his head to $3.3 million (2.5 million euros).

The Khordad Foundation said that if Rushdie had been killed earlier, the anti-Islam film currently enraging Muslims would never have been made.

Rushdie told India’s NDTV on Monday that the video, believed to have been made by Christian extremists, “looks like the worst little clip ever made”—but there could be no justification for responding with “mayhem and murder”.

The writer knows only too well the potentially fatal consequences of offending Islamic hardliners.

His memoir describes how the Japanese translator of “The Satanic Verses” was murdered, and the Italian translator stabbed at his home.

Lighter-hearted parts of his account describe how he grew “extremely fond” of his protection officers, whose nicknames included Fat Jack and Dennis the Horse.

The officers would bend the rules to help him stay sane, Rushdie recalled—taking him to the cinema after the lights went down, for example.

“They took (Rushdie and his son) Zafar to police sports grounds and formed impromptu rugby teams,” he wrote.

On one occasion, Fat Jack—a crack shot—used his talents to win Zafar a soft toy at an amusement park.

The memoir also describes how police developed an elaborate security plan when Rushdie was struck down by terrible toothache and had to be rushed to hospital.

“They had a hearse standing by and would drive it into a hospital bay and bring him out anaesthetized, zipped up in a body bag,” he wrote, using the third person.

“This proved to be an unnecessary stratagem.”

In another memorable episode, Rushdie recalls how he incurred the wrath of his bodyguards when U2’s lead singer Bono—with whom he had struck up a friendship—smuggled him out to an Irish bar.

But life in hiding took its toll on Rushdie’s relationships. His second and third marriages, to Marianne Wiggins and Elizabeth West, broke down during the years in hiding—and he admits in the memoir that he was unfaithful to both.

He describes the day in September 1998 when the death threat was declared over as a victory in “a fight for things that mattered”.

But 14 years later, Rushdie says writers who criticize Islam are still being attacked with a “medieval vocabulary”.

“If you look at the way in which free expression is being attacked by religious extremism, the things of which these people are accused is always the same—it’s blasphemy, heresy, insult, offence,” he told the BBC.

“The only way of living in a free society is to feel that you have the right to say and do stuff.”