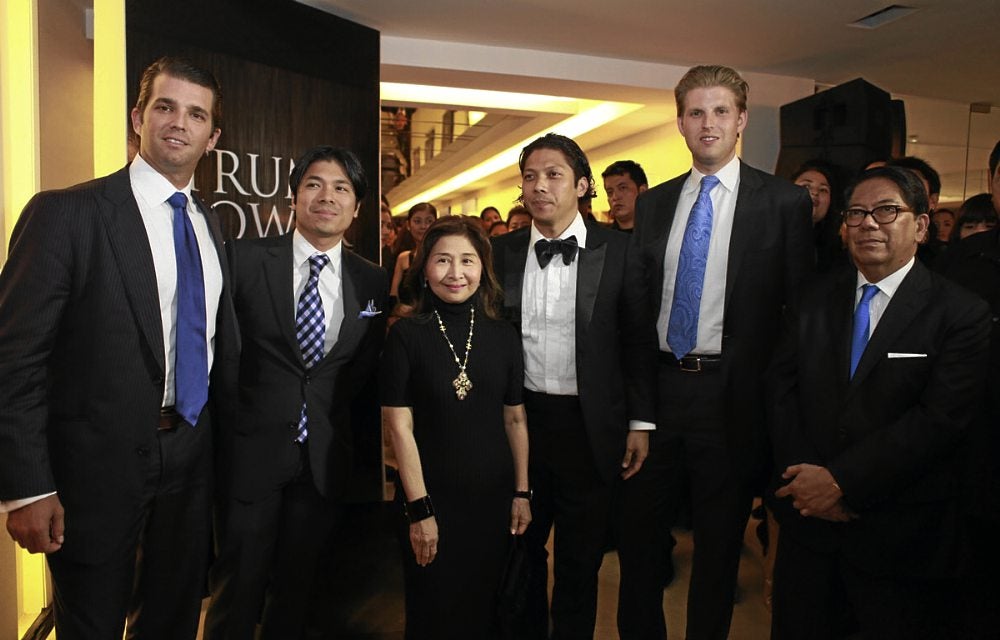 Internationally renowned Century Properties Group Inc. has achieved a first by erecting the first Trump-branded development in Asia, dahlings. The prestigious Trump Tower Manila will be delivered in 2016, we were told.

Trump is a top American businessman who has become world-famous not only for his real-estate developments but also as the stern-faced host in “The Apprentice,” in which he mentors novice businessmen. Those who fail to live up to his demands get his withering put-down, “You’re fired!”

During the ground-laying of Trump Tower Manila, Trump jetted into Manila with his equally brilliant and good-looking sons, Donald Trump Jr. and Eric Trump.

Last May, Century Properties reported “that 67 percent of the more than 220-unit residential tower has already been sold.”

“We are overwhelmed with the tremendous success of this project in such a short time,” said Eric Trump. “Trump Tower Manila has already received accolades even prior to breaking ground, which is an incredible accomplishment, further showcasing the strength of the local market and its increasing demand in the ownership of luxury real estate.”

Functions related to the launching of the Trump Tower raised money for charity, said Eric Trump.

“Similar to the previous events organized by Century Properties, Operation Smile Philippines is the beneficiary this year of several Trump Tower Manila functions that are intended to raise funds for the organization’s 30th anniversary missions in November and December,” said the Trump scion.

The glorious show of jewel-toned colors made the awesome 2012 Holiday Collection of Criselda Lontok another fashion coup.

One of Rustan’s longest and most renowned in-house designers, Criselda Lontok again proved why she remains the  favorite ready-to-wear designer of Cosmo Manille society women, dahlings.

Her collection is characterized by stunning colors and patterns and flattering silhouettes. As always, her collection showed sophistication, drama and all-out glamour.

The collection was shown during the invitational fashion presentation at The Gallerie of Rustan’s on Lontok’s birthday.

Guests were especially requested to donate to Bantay Bata 163, palanggas.

Designing clothes for Rustan’s for more than a quarter of a century, Criselda is now preparing pieces to mark her 30th year in the fashion scene, dahlings.

The opening of the newest milk tea player in the beverage scene, Y-Tree, was a packed affair, with well-wishers extending congratulations to my palangga, Robert Castañeda, president and chief operating officer of Y-Tree Corp.

Milk tea drinking, dahlings, has never been this yummy, trendy and hip, with Y-Tree opening at the Hub, on Mayflower Street, Greenfield District, in Mandaluyong. It was a grand milk tea affair, led by television host Boy Abunda, dahlings.

It was followed by the blessing officiated by Fr. Dominador “Domie” Guzman of the Society of St. Paul.

“Y-Tree is a perfect, cozy place to hang out with family, friends, officemates and even business associates while enjoying a refreshing Wintermelon Tea or Taro Milk Tea,” said Robert Castañeda.

Chair of Y-Tree is Raffy Florencio of TechnoMarine, palanggas.