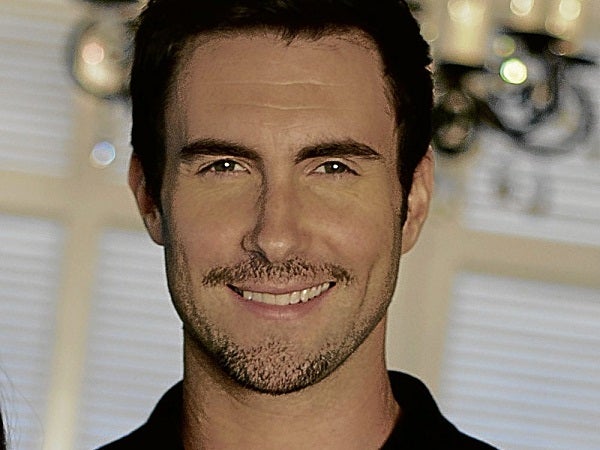 Clad in a snug black PinoyLab polo tee, dark blue jeans and lace-up boots sans laces, Adam Levine looked every inch the pop-rock superstar under the glare of the spotlight at the main living room of The Peninsula Manila’s Presidential Suite. Naturally, his outfit doesn’t include the headgear in question.

Many of us are still reeling from the news that shook the Twitterverse just last week. Fresh from Maroon 5’s two-night concerts in Korea, the sexy 33-year-old frontman had squeezed in a quick photo shoot for Bench last Monday morning, right before the one-on-one interviews and press conference.

It’s amazing how effortlessly his legendary charisma translates into his casual, no-frills sense of style. Adam seems to have bulked up a bit these days, either due to his yoga regimen or to his boxing “training” for the video of the band’s most recent single, “One More Night.” Contrary to his usual V-necked tee outfits, he’s actually a polo shirt kind of guy; he’s a fan of Bench’s polo shirts, like the same collared tee that outlined his toned, tattooed torso at that moment.

What’s the one item of clothing he can’t live without? “Blue jeans. Gotta have a good pair,” he said promptly, running his hands along the length of his acid-wash denims.

And the one thing he will never, ever wear? “Oooh.” He exhaled, and thought hard for a moment. “A fedora.”

Why? “Because they’re stupid,” he deadpanned, and a few eyebrows shot up in surprise. “Because it’s not the ’20s, and it looks ridiculous. I’m sorry if you’re wearing a fedora. Anybody?” He looked at the tittering crew at the sidelines; thankfully, no one seemed to be wearing any. Or at least, not where he could see them.

“When I get old and have a beard and a fedora, it’s not gonna matter. I’m gonna look like Tom Waits. But when you’re a kid, you look like … Just a really big douchebag.” Semi-shocked silence ensued. Adam caught the appalled look on his manager’s face and laughed. “You just shouldn’t wear one until you’re 60, it’s just the way it is! It’s my opinion.”

I suppressed a grin. Yep, that’s the “Voice” coach we all know and love, all right— shrewd and no-nonsense. Either you love him or hate him, and he doesn’t care. One thing we’ve learned from watching him on the hit TV show, Adam is the type of person who keeps it real. He speaks his mind and isn’t one to mince words. That’s what makes him a breath of fresh air, and thoroughly entertaining to watch.

Apart from his celebrity coach stint on “The Voice,” whose third season has just started recently, the Bench stud will be playing Leo, one-half of “The Lovers,” opposite Jenna Dewan (a.k.a. Mrs. Channing Tatum) in season 2 of “American Horror Story” premiering next month. He’ll also be making his official big-screen debut romancing Keira Knightley in the upcoming rom-com, “Can A Song Save Your Life?” Watch out for a bespectacled, slightly geeky-looking Adam in that one.

On the music side, he has a new pet project: His own record label, 222 Records, which has signed “Glee”’s Matthew Morrison. And of course, there’s touring with his band for their latest album, “Overexposed.”

Very, very in-demand. And very, very busy. For Bench (or any clothing brand, for that matter), this acquisition is nothing short of monumental. Adam has reportedly, and quite understandably, been paid a whopping sum to endorse the proudly Pinoy brand. How much, exactly? “Let’s just say it’s a lot,” laughed Bench head honcho Ben Chan. Well worth it, we’re sure.

For Adam, it’s not about the money. “You know what, they were really persistent and they really wanted me to do it,” he said. “I looked into it; I took my time and saw what was going on, what it was. It was just a really intelligently run, tasteful, elegant company. And I love the clothes; I’m wearing them right now. I love what they do, so there’s no reason for me not to endorse them.”

We’ve watched Adam grow from being just this notoriously amorous frontman of a rock band to one of the most influential pop icons of this decade. He takes it in stride. “I haven’t really done much; I’m kind of just myself all the time. Whether it’s about fashion stuff or acting or music, it’s almost like it’s gotta all be an extension of who I am. Otherwise, it doesn’t work. So I do whatever I feel comfortable doing, and whatever things I’ll find along the way.”

This Manila leg of Maroon 5’s “Overexposed” tour marks Adam’s third visit to the country in just four years. With this endorsement, we’re sure the fans hope he’ll have more reasons to come back. “It’s one of the most unique places I’ve ever been, ’cause the fans, the people here are so excited about the band. I think that’s so wonderful,” he said in earnest. “How lucky are we to [be] somewhere so far from home and have all these amazing fans that are just so passionate about the band, more passionate than most any other place we’ve been. So, we have a really deep appreciation for our fans here.”

Fans are already waiting with bated breath for the giant billboards to be put up along the main thoroughfares. Shirtless or not, his larger-than-life ads will most probably make the Manila traffic a lot more bearable.