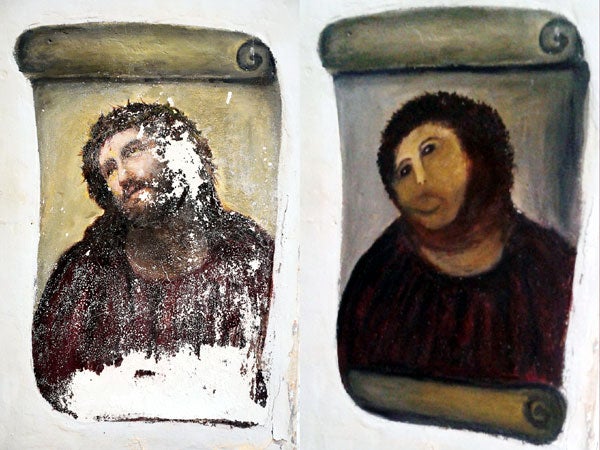 This combination of two undated handout photos made available by the Centro de Estudios Borjanos, shows the 20th century Ecce Homo-style fresco of Christ, left and the 'restored' version, at right. Only a month has gone by since Cecilia Gimenez, an 80-year-old artist, won global infamy for botching a restoration of the fresco in a little-known Spanish town, but it took even less time for Internet entrepreneurs to start copying her image compared to a monkey’s head to sell everything from T-shirts to cellphone covers and wine. AP

MADRID – The image appears on T-shirts and cellphone covers, coffee mugs and wine labels. And the 80-year-old pensioner who just weeks ago was mortified by the global stir she created with her botched restoration of a fresco of Christ is now looking to get a piece of the action.

The church painting in the town of Borja was for decades a little-known piece of religious art by a minor Spanish artist. Now that Cecilia Gimenez has disfigured it, it has found a new fate as an international icon — used to sell products around the world.

Gimenez’s lawyers have begun investigating whether all the notoriety may be turned to profit, albeit with an aim to help charity.

The fresco depicts Christ with a crown of thorns before crucifixion, in a style known as “Ecce Homo” (Behold the Man). It stood in peaceful obscurity in the Misericordia Church sanctuary since it was painted in 1930 — until Gimenez, a longtime devotee of the work, decided it needed to be rescued from flaking caused by the damp church air.

Word of the artistic travesty spread across the world, and the solemn Ecce Homo quickly took on a less dignified identity: “Ecce Mono.” Behold the Monkey.

Then something unexpected happened.

The town morphed into a tourism destination for people who want to see the restoration. The crush has been so big that the Sancti Spiritus foundation that owns the church and sanctuary recently started charging admission: one euro per visitor. Meanwhile, Internet entrepreneurs have quickly moved in to cash in on the phenomenon, printing “Ecce Mono” on a seemingly endless range of products to sell online.

Gimenez’s lawyers say she has no interest in a cut of what the foundation is charging people to see the fresco. But they are investigating possible copyright infringements of what she created. If she has rights, said lawyer Antonio Val Carreras Rivera, Gimenez could pursue payments from those using the image to sell products, although whatever she earns would go to charity.

She’s most interested in funding groups that help people with congenital muscular dystrophy, because she has a son with the disorder.

The Sancti Spiritus foundation is stuck in its own legal bind about what to do with the fresco. Should it restore the painting to its original state? Or leave Gimenez’s image on the church wall? Or try, as experts say is possible, to separate the two?

Gimenez herself is thankful for the many messages of support she’s received from around the world, her lawyers said in a statement. And she “regrets and deplores that commercial brands are financially exploiting a situation that began in total good faith, and which should be restricted to the human level beyond business or commercial interests,” the statement said.

The non-profit Sancti Spiritus foundation plans to seek a second opinion from art experts on what to do about the painting, before getting the view of lawyers, said foundation president Francisco Miguel Arilla, who is also the mayor of Borja, population about 5,000.

“Everyone wants to solve this, but no one knows the solution,” Arilla said.

While Gimenez could end up with ownership of what she painted on top of the fresco, the foundation isn’t sure who owns the original. It’s either the foundation or the 16 grandchildren of the painter, Elias Garcia Martinez. And Martinez’s heirs live all across Spain, Arilla said. “This seems like it’s going to be a long process,” he said.

Meanwhile, Borja is trying to cope with its newfound fame. While known for its wine, this is the first time it’s ever been a big tourism draw.

The influx of visitors hasn’t shown any sign of letting up since news of the fresco rocketed around the world, Arilla said. About 1,000 people paid admission last weekend, and the number of visitors has averaged 100 daily this week. The charge was put in place to cover the cost of additional workers needed at the sanctuary to manage the crowds.

“I thought this would slow down by now, but we still have a steady flow of people,” Arilla said.