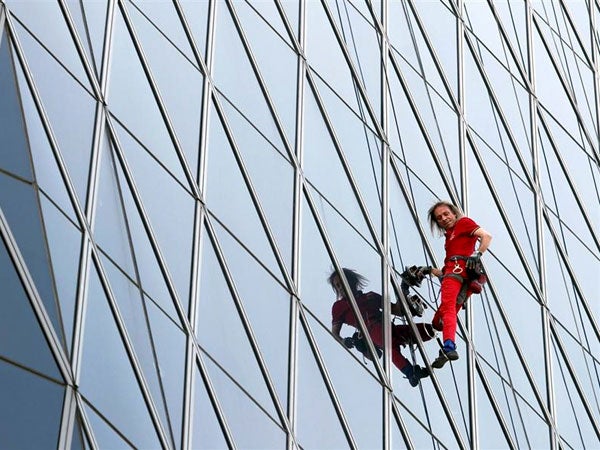 SHANGHAI—French “Spiderman” Alain Robert added another structure to his record of climbing achievements on Saturday, scaling most of a 388-meter (1,280-foot) tower in central China.

Robert has climbed more than 100 structures without ropes or other safety equipment, setting a record for “most buildings climbed unassisted” according to Guinness World Records.

In March last year he braved a strong desert wind to climb the world’s tallest building, the Burj Khalifa in Dubai, which stands at 828 meters.

This time, however, Robert used suction devices and mechanical ascenders as well as a safety rope to make his way up the steel and glass Fortaleza tower, which has no hand or footholds, state television said.

State broadcaster China Central Television showed Robert, 50, in a red T-shirt and black tights finishing the climb to the applause of a welcoming committee waiting on the platform.

It is not the first time Robert has climbed in China. In 2007, he successfully scaled the 420-meter Jin Mao Tower in China’s commercial hub of Shanghai, according to his website.