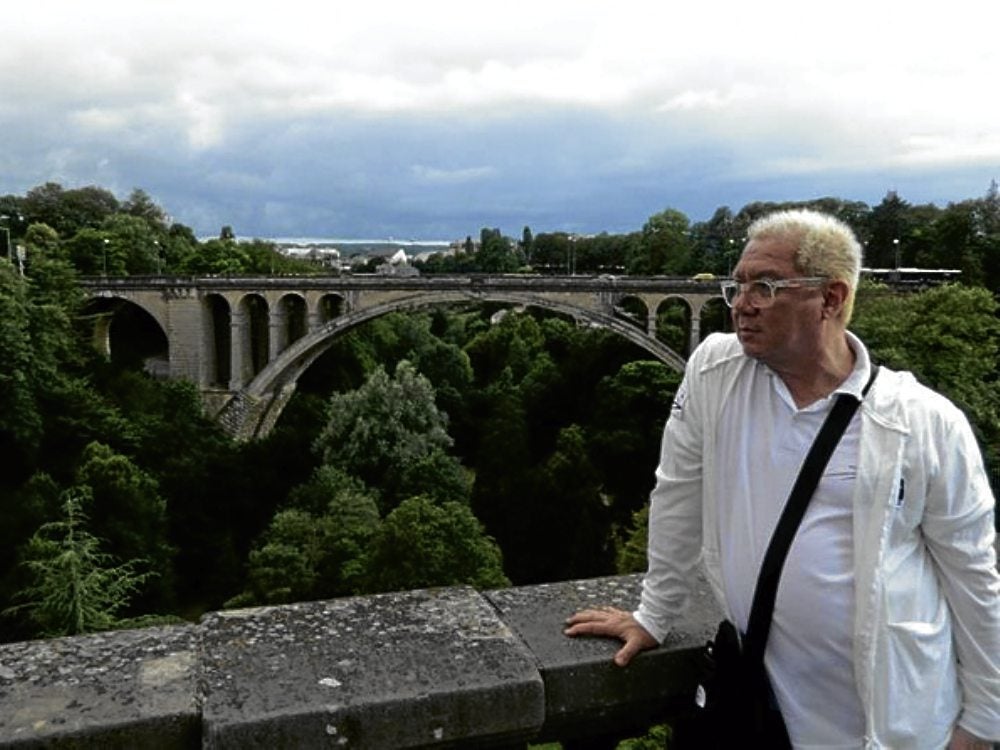 Douglas Nierras taking a break in their European tour.

In the past 25 years, the Douglas Nierras Powerdance (DNPD) company has always distinguished itself with its heart-wrenching choreography interpreted with  rawness, dynamism and soulful expression. Fresh from its European concert touer, DNPD will hold its homecoming concert, “Sayaw ng Puso at Kaluluwa: Ang Pagbabalik” on Sep.  29 at  Meralco Theater.

No choreographer in the country has given life to pop music more than Nierras, whose works include “Sayaw ng Puso at Kaluluwa”;  “Adios,”  a tribute to the plight of OFWs;  “Buhay Hapis at Pag-Ibig Ngayon at Kailan Man”;  and “Arurong ng Tricycle, Harurot ng Jeepney, Talbok ng Mini Bus, Tunog ng Van,” a tribute to jukebox hits of Imelda Papin.

“Ampalaya at Asukal,” a wryly humorous piece, illustrates the Eraserheads’ famous “Huling El Bimbo.” It shows his gift for transcribing text to movement in an entertaining manner.

Nierras explains the song is about a boy and a girl who promise eternal love in their youth, but drift apart due to some circumstances. The girl goes to Mabini, has a baby, and works as a dishwasher, while the boy searches for her. When he finally finds her, she’s run over by a car. The boy ends up dancing with a corpse.

“After 25 years, the company has made the repertoire live,” Nierras says. “They are not just pieces of dance but art pieces that are viewed over and over  and loved by our audiences. I have never received a negative comment like ‘Nakakasawa  panuorin [Tiresome].’ Every time the audience watch, they see some freshness infused into it. It’s like eating bits and pieces of a century egg.”

Although much of his suites were done in the ’90s as with their accompanying pop songs, the dances don’t look dated.

“They were choreographed as dances, not as an exhibition of what would be pleasing to the audience. Of course, those things are considered, but they were not a priority.  I create dances that would say something, tell a story,  evoke a feeling, touch a heart. Putting the movements together was more for sharing an experience rather than unfolding a spectacle, which are two different things.

“To me, if your main concern is to unfold a spectacle, it will elicit awe and wonder and nothing more. But the physical attributes and the energy are only the  first part of what makes it a work of art or not. What’s more important  is how  you feel after seeing, feeling and experiencing the dance. I still subscribe that real dance would not remind you of what the steps were, but of what the dance felt like. We’re not talking about beauty of movement execution or dexterity.”

Nierras likens good choreography to knowing a person. “When you talk about a person, you talk about the soul, or what makes the person who he is rather than what he looks likes. You will always remember the kindest, most generous, most considerate, and most caring person in your life, and not necessarily the most physically beautiful. It’s also what you see in dance; it’s not something that your eyes alone will perceive.”

One of Nierras’ greatest works was inspired by Basil Valdez songs such as “Kapag Ako ang Magmahal” and “Ngayon at Kailan Man.” The dancers are dressed in black trousers with suspenders and white T-shirts, looking like piano keys. The counter-rhythms, the changes of formation, and the expressive strength of the work are so lucid, the audience is mesmerized.

The newest audience favorite is “Dance with My Father,” sung by Luther van Dross. It was choreographed  in 2010 on the 40th day of the death of Nierras’ father, Rudolfo.

“There is something to the piece that stabs the heart of every person who watches it,” the choreographer says. “Perhaps it’s about spending time with your father. The music is powerfully popular in the sense that it was never abused.”

Nierras still has many beautiful works waiting to be restaged such as his entry that won the Grand Prize at the 10th Saitama International Creative Dance Concourse.

“What’s stopping me is the set, especially the black net which is expensive,” he explains. “The problem is storage. We have been a gypsy company. We don’t have a studio where we can store props and costumes. We’re working out from Savannah Moon, which has been our partner. Our repertoire has to be transportable.”

Still, DNPD sets itself apart from the rest with its aerial choreographies. In most tours, Nierras will always bring a rigger to hoist up the dancers. “It adds a different dimension—a highlight but not the main feature.”

On their signature platinum-blond hair, Nierras explains that it started three years ago when they represented the Philippines in the Kuching International Festival, Malaysia: “Our catsuit costume had  gold lines, and  it needed a  headdress to go with it. I didn’t want a head dress because it got in the way. We dyed our hair blond instead, which was the nearest thing to gold. Under the lights, the dance doesn’t have black splotches. The costume shines more when you have blond hair. It has transcended its utilitarian purpose of substituting a headdress into an artistic identity.”

Despite Nierras’ prolific accomplishments, the dance world sees him more as a tyrant than a genius.

“The good, the true and the real are less respectable than the bad,” he says.  “Sad to say, but to keep one’s integrity and to share substance, one has to become a tyrant. If that’s what is required to share truth, goodness and beauty, I will opt to be a tyrant.”