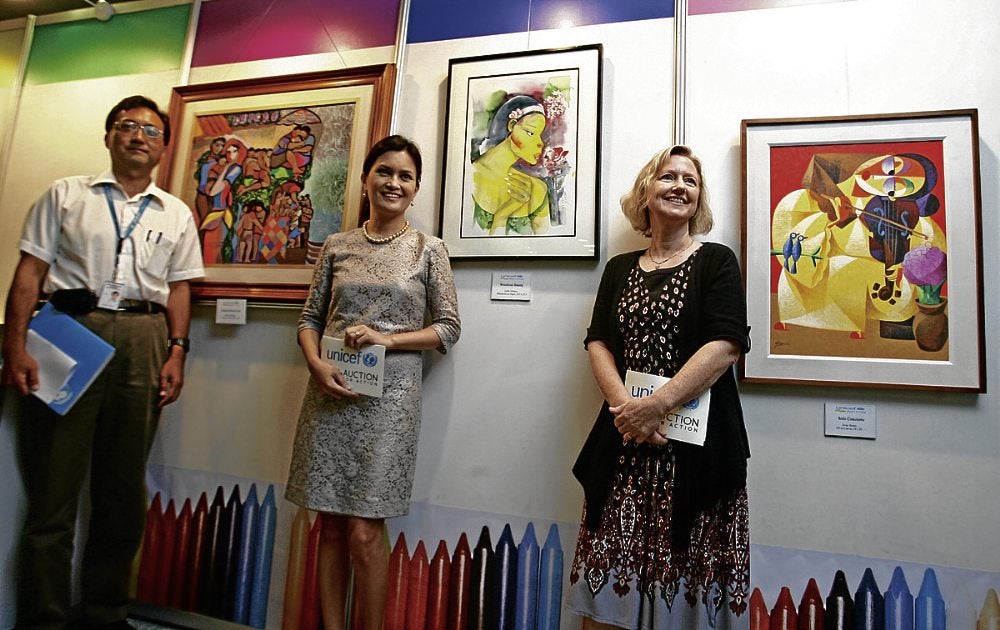 There is a wide choice for art collectors in the art auction to be conducted by the United Nations Children’s Fund (Unicef) starting first week of October, just in time for the celebration of National Children’s Month.

For art-lovers on the look-out for paintings with musical orientation, there is Jovan Benito’s oil-in-canvas “Solo Concierto,” with the music-maker reflected in a palette of colors full of nuances of rural life.

For dance-lovers, there is Don Artificio’s “Isabel,” which shows  a ballerina with a flippant reflection.

If you are keen on acquiring acrylic-on-paper by an artist with eminent status, then Juvenal Sansó’s “Tranquil Serenity” and “As Hope Reaches Skyward” are the answers.

Quite stunning is the sculptural work called “Fly Up” by Michael Cacnio, showing a boy climbing a ladder in the act of chasing balloons.

And if you need something unique for future gala nights, you can bid for this necklace donated by Jewelmer. It is composed of 35 Philippine golden South Sea pearls with an estimated value of P212,500. The starting bid price is P127,500.

Said Unesco celebrity ambassador Daphne Oseña-Paez, who mobilized the art donors: “Gold South Sea pearls are endemic to the Philippines. So when you see a gold South Sea pearl like in Chanel or in some other major brand in Europe, 99 percent of the time it’s from the Philippines. So it’s a major acquisition. We thought they’re just going to give an earring but, surprisingly, they donated no less than a strand.”

During the media preview, Angela Travis, chief of communications and private fundraising of Unicef Philippines, said the UN agency was entirely dependent on donations.

“We work in about 190 countries across the world, and all of our income is voluntary,” she said. “It comes from governments, companies, private corporations, and most importantly from individuals who are committed to children and to our programs. Here in the Philippines, the contributions from private individuals are becoming the most important to our work.”

The week-long auction on eBay Philippines, Oct. 1-7, will offer art lovers and collectors the chance to bid for high-quality Philippine-made items at almost half the price.

Exhorted Unicef country representative Tomoo Hozumi: “Buy a beautiful item and help children at the same time. The funds raised from the auction will go toward education, health and nutrition, protection and emergency programs for children who are the hardest to reach and most in need.”