Why I believe my dog is in heaven | Lifestyle.INQ ❮ ❯ 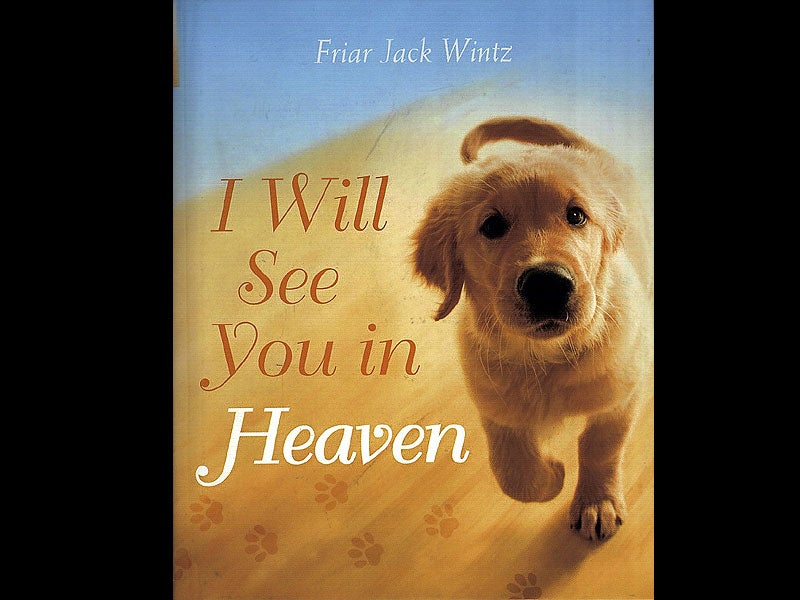 Why I believe my dog is in heaven 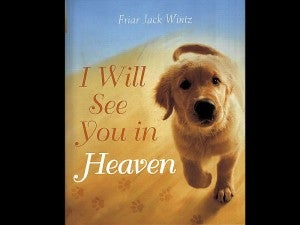 It’s been almost three months since my beloved dog Banana died of cardiac arrest, a few days short of her seventh birthday. I’m still struggling with the loss, but many people in my life have stepped up to help me along the way.

A couple of weeks ago, my New York-based friend Nen Ira sent me a book through her parents, Rene and Luning Ira. It’s entitled “I Will See You in Heaven,” a small, easy-to-read gift book for anyone who has lost a beloved pet, written by a Franciscan friar named Jack Wintz.

Father Jack, as he is called, was ordained a Franciscan priest in 1963, holds an MA in English literature, and was a long-time writer, editor and photographer for Catholic newsletters and magazines in the US.

This second book, which expands on the first, and with the title question replaced by an affirmative statement, was published in 2010.

Father Jack doesn’t make a blanket statement that, yes, our lost pets will await us at the pearly gates—or, as all animal lovers believe from that famous poem, at the Rainbow Bridge, where all departed pets wait for their masters to cross. Instead, he presents many ideas that make a lot of sense, and cites scripture to back them up from a dogmatic Christian perspective.

For instance, he reminds us early on that God did make the animals, and after the entire drama of creation, Genesis 1:31 states that “God saw everything that he had made, and indeed it was very good.”

“Certainly,” Father Jack posits, “God is not going to create—and then ignore—what he perceives as ‘very good’ creatures!”

He cites passage after passage, and retells the story of Noah and how God specifically asked for pairs of every kind of animal to be saved. Then, consistent with his own orientation as a Franciscan, he goes back to his inspiration, the great Francis of Assisi, in my opinion probably one of the coolest and most progressive saints of all time, the former party boy who realized there were more worthwhile things to do in life.

Now considered the patron saint of animals and the environment, St. Francis was unequivocal about caring for animals, and once famously preached to a flock of birds (who listened!) and asked a wolf to please stop killing people in the Italian town of Gubbio, and the townspeople would promise to feed him (the wolf stopped).

Many people who, like me, believe in an afterlife for all living things, have told me that I will see Banana again, in the heaven that I believe she deserves much more than I do.

Even poet Pablo Neruda writes in his poem “A Dog Has Died,” “And I, a materialist who does not believe/ in the starry heaven promised/ to a human being/ for this dog and for every dog/ I believe in heaven, yes, I believe in a heaven/ that I will never enter, but he waits for me/ wagging his big fan of a tail/ so I, soon to arrive, will feel welcomed.”

It’s a reassuring thought, and one that makes a lot of sense to me. Apparently, though, the idea of an animal having a soul has been a point of contention for years.

Basically, theologians argue that a soul is a different thing from life.

“Animals have a soul in the sense that they possess life,” states the website Biblequestions.com.

“A common Hebrew word translated as life (soul) is nephesh. Nephesh is used for the life or breath of both animals and man… It is a state of animation, breathing and awareness. Men and animals alike possess a soul in the sense of breath (nephesh). However, in the sense of possessing a part or element that lives forever, as man possesses, animals do not possess an eternal spirit. The animal simply and totally returns to the dust, the spirit of man continues to exist.”

There is Biblical basis for all this, scholars claim, originating all the way from Genesis, where the subservience and inferiority of animals to man are underscored. In short, after an animal dies, it’s gone forever, while man’s spirit lives on to reunite with his Maker in heaven.

The online debates are interesting. “Jesus did not die on the cross to save animals, because they don’t have a soul,” posted one Christian, apparently rankled at the thought of cockroaches being entitled to eternal life as much as he is.

Father Jack got his share of reactions to his initial writings on the subject, which he good-naturedly reprinted.

“I was shocked that the editors of a supposed Catholic magazine would publish ‘Will I See My Little Doggy in Heaven?’” wrote one Clayton of Santa Clara, California, in response to Father Jack’s essay on a question asked of him by a young parishioner. “I was taught that only human beings had immortal souls and free will, and therefore, were able to earn either heaven or hell. When did that change? How do dogs and other animals know what is right or wrong?”

I’m no doctor of the church, but I think poor Clayton misses a very important point. It’s the common folly of humanity, which believes that our free will and ability to “choose” between right and wrong is a gift that makes us superior—but which, I might add, we have misused beyond repair. If what’s happening in our world right now is the consequence of that freedom—you know, killing and stealing and, uh, “lapses in judgment”—then I can’t say it’s a completely good thing.

Besides, I’m of the belief that animals don’t have to choose between right and wrong, because everything they do is inherently right. They go by their pure, unadulterated instinct and nature, the very same ones God gave them. They don’t need to build computers, get nose jobs or post updates on Twitter. They live and die completely authentic to how they were created by their Master. It doesn’t get any more “right” than that.

That’s why I believe I won’t see just Banana in heaven. I’ll see all the pets I lost, as well as every dog slaughtered by meat traders, every whale shark killed for its fins, every gorilla shot by wildlife poachers, every tiger murdered for its pelt, and every turtle hacked up to make sunglasses or fashion accessories. Yes, even every pig, cow and chicken that has fed and nourished human beings.

Finally, I take comfort in the words of no less than Blessed John Paul II himself. In a public audience in 1990, the beloved pontiff sent animal-rights advocates cartwheeling in joy when he declared that “the animals possess a soul and men must love and feel solidarity with our smaller brethren.”

Yes, he said it. Also, he stated that all animals are “fruit of the creative action of the Holy Spirit, and merit respect,” and that they are “as near to God as men are.” Blessed is he, indeed.

Father Jack does qualify that he doesn’t presume to know what heaven will be like. “This is a big-time mystery. There are many things about our future paradise that surpass human understanding.”

One idiot (sorry, couldn’t resist) actually posted on the Web that if all animals were good and went to heaven, there would be no more room for people. Some people really do still think heaven is defined in square meters and broadband Internet speed.

In his book, Father Jack recounts a story of a grief-stricken little boy asking a pastor in Peoria, Illinois, if his beloved German Shepherd was in heaven, and if he would see his dog someday.

“Yes, you will see your dog in heaven,” answered the wise old pastor, “if that is what it takes to make you happy.”

No human can really say for sure whether I will see my dog in heaven or not—but in the absence of knowledge, I will cling to my faith. I believe in my heart that all the good and beauty that Banana brought to my life came from a divine source, and she has now returned to that source, and my God is watching over me with Banana at His feet.

I’ve prayed constantly that I would dream of Banana, just so I know she’s okay. The other day, my good friend Joy Rojas came to me and said it was she who had dreamt of my dog, a funny, vivid dream that involved finding Banana in a goat yard and carrying her (all 75 lbs of her—and Joy is hardly a hundred pounds) to a car to bring her back to me.

All I wanted to know was, did Banana look all right? “She did,” Joy told me happily. “She was healthy, clean and looked really contented.”

Just as I hoped she would be in heaven.