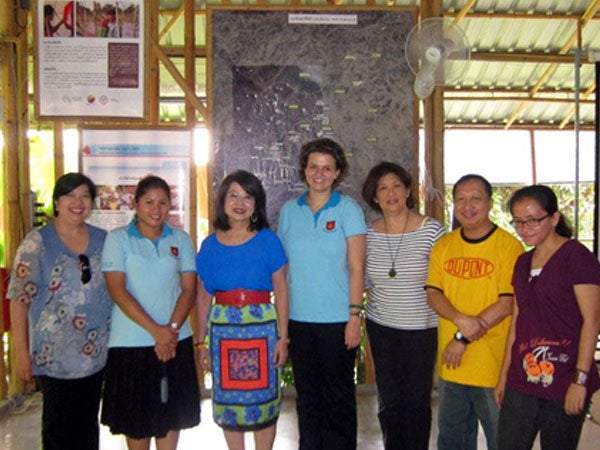 Thailand’s Mr. Condom revolutionizes education in one of poorest provinces 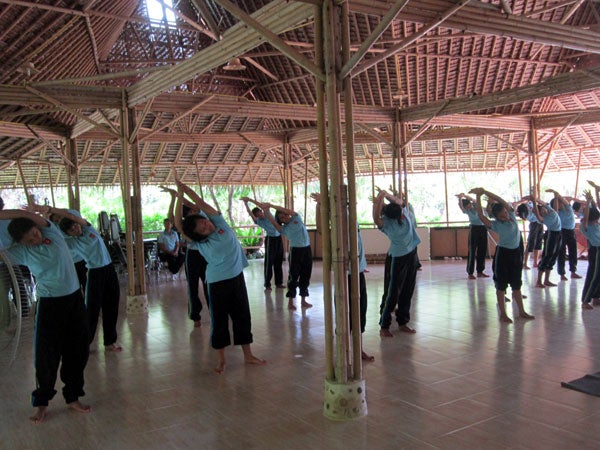 BURIRAM, Thailand—How many of us in school memorized historical dates and mathematical and scientific formulas that we now no longer remember? How can students learn without forgetting them and use the knowledge to improve their lives?

A man in Thailand has found a way to make learning fun and helpful not only to the students but to their families as well.

Khun Mechai Viravaidya, popularly known in Thailand as “Mr. Condom,” believed that in order to create a new generation of citizens, thinking out of the box was the key. He established the Mechai Pattana Bamboo School in 2009 in Buriram, one of Thailand’s provinces whose residents have the lowest educational attainment.

As its name suggests, the school has its buildings crafted out of open bamboo, which makes them breezy.

The school has received a lot of recognition for its revolutionary model of education to improve the creative abilities of the children.

Explaining the philosophy of the school, Jordan Worthington, program officer of the Mechai Viravaidya Foundation, told the INQUIRER.net that “we have to think outside the box. We have to change our school from something old-fashioned to something that is applicable to their everyday lives, something that would give them skills to work.”

INQUIRER.net joined officers of the Philippine-Thai Cultural Organization (PTCO) in a study tour of the Mechai Pattana Bamboo School as well as the other projects of the Mechai Viravaidya Foundation, made possible by the Royal Thai Embassy Manila led by Ambassador Prasas Prasasvinitchai.  The tour was part of Thailand’s people-to-people program that aims to promote and foster friendship and cooperation between the Philippines and Thailand..

The school has a qualifying examination for aspiring students. Also, the students and parents are interviewed in order to orient them about the school, its programs and to ensure their commitment to the school and its objectives.

The Bamboo School is unlike any other private schools because the students and their families come from the poorest members of society. Tuition is paid by planting 400 trees and 400 hours of community service for every school year.

The students help in the temples, help the elderly, clean at hospitals, and help in planting and harvesting rice.

Each student is given a booklet where teachers can record his or her good deeds.

The school has opted to do away with the rote method of learning where students only repeat what they have learned without fully understanding them. Instead, they have adopted the learning method that uses critical thinking, creativity and group work.

The students have a voice in selecting their teachers and the incoming Grade 7 students. They are also part of the purchasing committee to teach them about budgeting, planning, transparency and negotiation skills.

The students and their families also learn practical agriculture-based courses including animal-raising (pigs, chicken, ducks, frogs, fish and even crickets). They also plant fruits and vegetables, often in an unconventional manner. Vegetables are grown in sandbags to save space. The sandbags are placed under lemon trees to save water consumption while cantaloupe is grown and fed using leftover intravenous catheters (IV lines). The IV tubes and plastic lines are used for storing water and drip irrigation. In a two-meter-wide, plastic-covered shelters, mushrooms are grown. Scientific knowledge is applied to ensure that fruits grow off season to fetch high prices.

Every morning, the students have their physical education class. Some students also have yoga classes. When we visited the school, some students just had their massage class.

The students are also allowed to use the computers. The Bamboo School has a partnership with Microsoft and the entire school has Wi-Fi connectivity.

Worthington said the students have an IT class for three hours a week and can also use the computers for research and project-based lessons.

“In the future, we want to start e-learning so students [can] take lessons at their own pace,” Worthington said.

Currently, she said the school laboratory serves as an IT hub for the community as well. Local school children and the villagers can come to learn basic computer concepts—use of Office applications (e.g.Word, Excel) and how to use the Internet. Students from the Bamboo School also visit computer classes in other smaller schools to teach children how to use computers.

“In our school, we want to give as many opportunities as possible [because] most of our students come from disadvantaged families,” she said.

Teachers do not impose. Creativity is present not only in the art class but in every lesson. Aside from the regular subjects, agriculture and IT class, the students have a say on what other areas they want to learn about. The students choose projects they would like to explore, and the teachers guide them.

The students receive free meal from the school. The meal is sourced from the agricultural produce resulting from the labor provided by the students and their families. A portion is used for their meals in school while a part is given to their families, and the rest are sold for added income for the school.

From the creation of the Bamboo School came the School-BIRD (School-Based Integrated Rural Development) program that aims to assist government primary schools in poor areas to become hubs for social and economic progress.

Aside from monetary support, the primary schools receive training for the teachers as well. 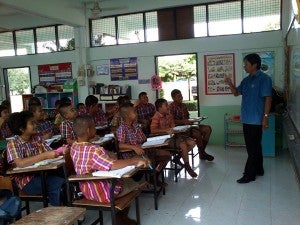 Some of these beneficiary schools include the Huaysala School and Ban Pangpuay School, both of which have adopted programs initiated in the Mechai Bamboo School.

Like in the Bamboo School, the students are taught to plant fruits trees and vegetables, and take care of fishes, frogs for income-generating purposes.

Currently, five schools follow the Mechai model. The project in Huaysala is only about 4 months old. But unlike in the Bamboo school, the parents do not always participate. The students teach their families about agriculture.

Somboon Chaiyet, one of the teachers in Huaysala School said Mechai Foundation provides training programs for teachers, particularly in agriculture, who in turn share the knowledge to their students.

However, he said the teachers do not receive extra pay for their training.

“We have too many work but we are happy,” he said with a smile.

The Mechai Foundation provides funding for the school as well as its village. A representative from the foundation evaluates the projects in the school and the village and determine the areas that need improvement.

“It will start with the school and continue with the village,” Somboon Chaiyet said.

Like in Huaysala, Ban Pangpuay School also has a roomful of toys that the students can borrow for a week but only after they have finished their school tasks and planting of trees. Both schools also have their own computer room and both have free Wi-Fi connection.

But still, the public schools continue to receive funding and infrastructure support from the government.

The Mechai Foundation does not solely rely on donations. It has established profit companies to help fund its non-profit, rural development activities. These profit-making businesses include the Cabbages and Condoms Restaurant chain, the Birds and Bees Resort in Pattaya and the Business for Rural Education and Development (BREAD), which sells rural goods and handicrafts.

The schools are but part of the variety of rural development projects of the Mechai Foundation. Mechai has also managed to convince various companies to relocate in Buriram and employ villagers to prevent them from transferring to other areas for work.

The PTCO hopes to adopt in the Philippines what was learned from the Buriram trip and use it as a pattern for its projects.

Khun Mechai has shown that a vision need not be impaired by limited resources, and with passion and creativity, a goal is always attainable.