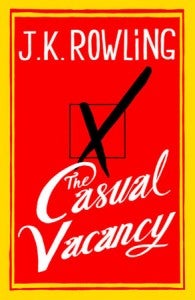 The book is set in the small British village of Pagford and tells the story of what happens after the unexpected death of a town official leaves a vacancy on the town’s governing body.

Coming five years after the release of the last volume in the Potter saga, “The Casual Vacancy” is already at No. 1 on Amazon.

Publishers have tried to keep details of the book under wraps ahead of its launch Thursday, but “The Casual Vacancy” has gotten early buzz about references to sex and drugs that might be a tad mature for the youngest “Potter” fans.