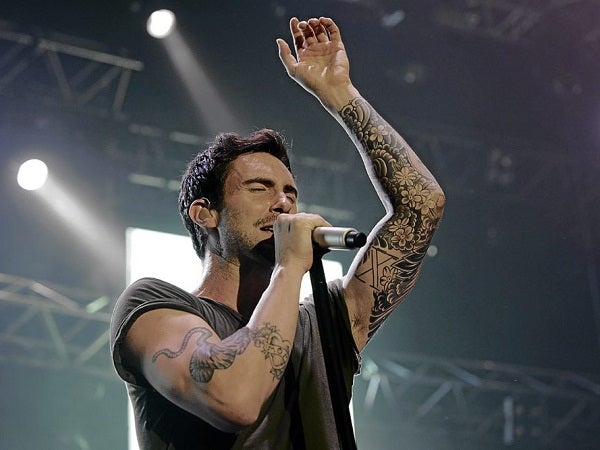 Judging from the overwhelming crowd turnout, one would think this was Maroon 5’s first-ever concert in Manila. The mad scramble for tickets reached boiling point, such that people pulled all the strings they could. But not even political power or all the money in the world could change the fact that there was neither space nor ticket to spare.

It was actually the American alt-pop outfit’s third gig in a span of four years, but Pinoy concertphiles just can’t seem to get enough of the band and its music. The clamor for “one more night” went unheeded, as the band was running a tight schedule for their “Overexposed” world tour. You can thank the phenomenal success of “Moves Like Jagger” and the infectious dancepop ditties of the “Overexposed” album, not to mention the newly minted superstar status of the band’s scorching-hot frontman.

Inside the venue, a different kind of chaos ensued. The crowd was so thick that moving around made it literally harder to breathe. After a few songs by young American band The Cab, who had been here for the Smash Project music fest last March, the members of Maroon 5 took the stage amid shrieks — bassist Mickey Madden, drummer Matt Flynn, guitarist James Valentine, and keyboardist PJ Morton, who’s replaced original member-on-hiatus Jesse Carmichael.

As soon as frontman Adam Levine’s unmistakably sexy falsetto filled the air, the massive crowd erupted into thundering screams that shook the Big Dome from top to bottom. Composed of Maroon 5’s hottest singles, cover medleys and a six-song encore, the setlist showcased the band’s versatility and paid tribute to their various pop-rock influences that spanned decades.

The band opened with current radio charttopper “Payphone,” followed by a heady mix of old and new favorites that had everyone grooving nonstop. The band teased the crowd with a few bars of Michael Jackson’s “Don’t Stop ‘Til You Get Enough,” then segued into the no. 1 single “Makes Me Wonder” from the sophomore album “It Won’t Be Soon Before Long.”

New ditties “Lucky Strike,” “Wipe Your Eyes” and “One More Night” were joined by past hits that included “Sunday Morning,” “If I Never See Your Face Again,” “Misery,” and “Harder To Breathe” with a Skrillex intro. The main set ended with the band’s first mainstream hit “This Love” that segued into Adam’s guitar solo of the Red Hot Chili Peppers’ “Don’t Forget Me.”

It’s interesting to note that the crowd sang along to every song with gusto, whether it’s from the new album or the old ones. That should put the band’s initial reservations about the reception to their new sound to rest.

Clad all in black, Adam was pure sexual energy; I guess those two-hour daily yoga sessions did wonders for his onstage stamina. A subtle sway of his hips, a sly half-smile, and he got the females in the audience going absolutely wild.

It was during the encore set, however, when he and the rest of the band showed that incredibly special connection they’ve built with their fans here and all over the world in the last 10 years. James dedicated their seminal cover of The White Stripes’ “Seven Nation Army” to a certain Carlo, a cancer patient and former guitar student of theirs who had passed away.

For that song, Adam took over the drums and alternated with James for the vocal duties. In a surprisingly tender moment, Adam did a sweet acoustic version of “She Will Be Loved” for all the smitten ladies in the house, and told the men to treat them a little better. (Gotta give the guy more pogi points for that one.)

Finally, Adam dedicated “Daylight,” the song from “Overexposed” that’s closest to his heart, as a heartfelt thank-you to their adoring Filipino fans.

The band switched back to the dance grooves with a medley of Human League’s “Don’t You Want Me” and Justin Timberlake’s “Sexyback,” and Gym Class Heroes’ “Stereo Hearts. They got the crowd whooping with laughter with teaser clips of Psy’s now-famous “Oppa Gangnam style!” line, probably as a tongue-in cheek reference to Adam’s embarrassing run-in with the local police at a gym in Korea. (Check his Twitter feed for that story.) Saving the best for last, they finished the mind-blowing set with—what else?—the phenomenal “Moves Like Jagger.”

The hangover that afflicted  everyone who attended was just incredible. Maroon 5’s third concert was a hot and heavy electropop-rock romp from start to finish, with color-block LED panels and stunning lights dancing to the infectious beats. Naysayers can nitpick the band’s new pop direction all they want, but Maroon 5’s collective onstage charisma is just undeniable.

After about a decade in the business, the band never fails to make every song sound so fresh and enjoyable, and after two shows, that’s got to count for something. Here’s hoping for “one more night” real soon… Or better yet, many more to come.

“Maroon 5: The Overexposed Tour live in Manila 2012″ was presented by Dayly Entertainment and Midas Promotions.