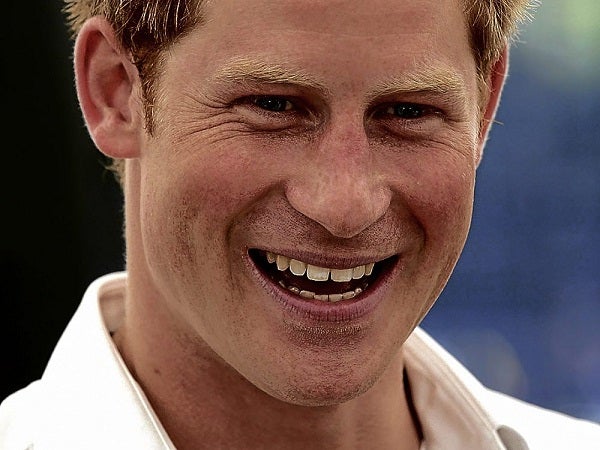 When Harry met silly–a farce to be reckoned with

There’s a 30-percent hike in the sale of package holidays to Vegas.

The last time we saw him elegantly and fully clothed (bespoke tailoring by Gieves & Hawkes of Savile Row; suit from £3,800), he was standing in for his granny at the Olympics closing ceremony. Twenty-seven-year-old Prince Henry (“Harry”) Charles Albert David, third in line to the British throne, had finally earned the public’s admiration, and the confidence of Her Majesty the Queen and the Royal Household, to take on this royal duty under the harsh glare of the world’s flashbulbs.

By all accounts, the laid-back and fun-loving prince had worked hard in recent years to distance himself from his roistering days and juvenile antics, and playing down his playboy reputation by being in a steady relationship with Zimbabwean Chelsy Davy that lasted almost seven years.

As ambassador for the London Olympics, he was a tireless cheerleader during the Games. Post-closing ceremony, the royal family decamped for their annual summer vacation in Balmoral, Scotland, while Harry—the least stuffy of the tightly buttoned-up Windsors—went with close friends and his current squeeze, 23-year-old blonde Burberry model Cressida Bonas, to Sir Richard Branson’s private playground on Necker Island in the British Virgin Islands, for a weeklong celebration of Sam Branson’s birthday.

From there, Harry and a couple of chums, minded by three Scotland Yard bodyguards, flew to Las Vegas for more boozy partying.

It was reported that within hours of arriving, the thirsty lads hired a cabana at Surrender, Wynn Las Vegas & Encore Resort’s louche open-air nightclub built around a pool which features pneumatic dancers in skimpy bikinis gyrating against poles to loud music.

In the early hours, Harry—now probably much the worse for wear—invited a group of girls up to his £5,000-a-night suite, where they played “strip billiards,” a game where you remove an item of clothing every time you fail to pot a ball. It took only one failed shot before our redhead, by now wearing only his swimming trunks, was totally buck-naked.

Ever the gent, Harry, it was reported, was gamely trying to protect one guest’s modesty, saying: “I will protect you; I won’t let them see you.” And then—click. Click.

Within hours of these revels, TMZ, the American celebrity-gossip website, wanted these scenes to be seen by its 18.5 million readers, paying $200,000 for pictures showing Harry wearing only a thong necklace and a Rolex, cupping the crown jewels and shielding a naked woman; and Harry bear hugging a naked woman next to a pool table.

If he entertained the silly notion that what happens in Sin City stays in Sin City, he was quickly disabused, for his female guests did not have the good manners to appreciate his hospitality and to respect his privacy.

The high jinks elicited harrumphs and raised questions about why his royal protection officers failed to ask partygoers to surrender their phones before entering the suite, and also failed spectacularly to stop pictures from being taken.

“Royal protection officers are there to protect him for security reasons,” said the Commissioner of the Metropolitan Police, “not to regulate his life.” The Met’s former head of royal protection chimed in, but with tender mercy: “We’re paying huge amounts of money for this young man to be followed by security everywhere he goes. British security costs in excess of £120 million a year, but on the other hand, royals have to have a life… Protecting virile young royals, such as Harry, is a nightmare. The prince is a lovely young man, with lots of testosterone, but there is a balance and occasionally that balance slips.”

Were Harry’s puerile escapades in Vegas an affront to the dignity of the Royal Family? Did his behavior and monumental lapse of judgment bring disrepute to the most popular royals in the world? Did Charles, the loving and indulgent father, throw an apoplectic fit? What do his sophomoric pranks and alcohol-fueled partying tell us about him, his sense of responsibility, maturity and regard for others?

The prince is reputed to be seriously and actively engaged in the affairs of 10 charities, of which he is patron. In May this year, he was in DC to receive a humanitarian award from Colin Powell, the former US Secretary of State, for his work in supporting wounded soldiers. In March, on his first solo tour for the queen’s Diamond Jubilee visiting Brazil, Belize, the Bahamas and Jamaica, he discharged his royal duties with aplomb, and was mobbed like a rock star wherever he went.

When Katie Couric, the American anchor for ABC News, asked him how he felt going solo on these highly publicized tours, he said: “It would probably be easier as a couple. I don’t have anyone. I’m waiting for the right person, someone who’s willing to take on the job.”

He said he was “100-percent single.” This was like a red rag to a bull, for now that his brother William is off the shelf and married, Harry’s position as the most eligible bachelor in the world—who, when he turns 30 in 2014, stands to inherit £10 million from his mother’s estate—is at risk from determined “Harry Hunters,” buccaneers and international heiresses who stalk his favorite boites in the hope of strategically bumping into him.

Harry was only 12 when Diana died. Years later, when the brothers were asked in an interview how they coped after her death, Harry replied: “We had each other.”

He is based (calm down, girls) at RAF Wattisham in England where he is finishing his training flying Apache helicopters. His Vegas hangover will have been seriously frowned upon by his commanding officers, whose ironclad code of conduct warns officers they must comport themselves with the highest professionalism “on and off operations.”

All of these aside, Harry has asked to be deployed to Afghanistan for a second tour of duty.

The prince’s past youthful indiscretions were unbidden gifts to the media, as he was snapped by paparazzi emerging in the early hours, drunk and dishevelled, from London nightclubs.

Harry enjoys the company of a small group of loyal and circumspect friends from childhood—scions of wealthy aristocratic families and trust-fund babes with double-barreled names like Harry Wentworth-Stanley, Isabella Anstruther-Gough-Calthorpe and Charlotte Kennington-Courtauld. They are bound by an “omerta” of friendship that fiercely guards his privacy.

Arthur Landon, one of Britain’s richest young bachelors who was with him in Vegas, was deeply flabbergasted by the photos and the ensuing fallout. He said the person who sold the pictures was “despicable” and had “abused Harry’s hospitality.”

His friends, he said, are “really careful not to betray his trust.” In some very posh circles, taking clothes off at parties is very Benny Hill, but all part of the fun.

Britain has one of the most irreverent, questioning and vibrant newspaper industries in the world. The Sun, the UK’s largest-circulated daily paper and part of media tycoon Rupert Murdoch’s News Corp., likes to be controversial and not just with its notorious “topless Page 3 girls.”

It was the first—and only—British newspaper to carry the pictures of Harry in his birthday clothes, several days after everyone and his dog had seen them online. “Heir it is,” the headline screamed.

Britain’s press watchdog received nearly 4,000 complaints from the public voicing their anger at The Sun’s coverage. A recent poll found that 61 percent of the public believed the paper was wrong to publish the pictures; 68 percent judged Harry’s behavior to be acceptable for a young single man on a private holiday, and that 75 percent have a positive view of the boy.

After the photos had gone viral, Harry went into purdah, laying low, to allow the kerfuffle to die down. Royal leaks to friendly newspapers reported that the “prince feels he has let himself down and is very disappointed with the fact he allowed it to happen.”

No sooner had these words been uttered than a 32-year-old buxom blonde, Carrie Reichert, had sold her “story” to a newspaper. Claiming to have been handpicked by his friends from the swimming pool to join his party, she said she was stripped down to her string bikini, with Harry completely naked.

“It was just crazy,” she said, “he looked actually delirious.” A “drunken fumble” followed; they kissed and disappeared into another room where she claims to have been alone with him “for up to 20 minutes.” She said “Harry was a gentleman,” but also that he was “wasted.”

A charm offensive to win back the public trust started when Harry attended the WellChild Awards in London. He is patron of the charity, which supports terminally and critically ill children. Hope Hillis, 5, hugged and greeted him with two wet lipsmacks on his face. Without missing a beat, the delighted prince said: “But we’ve only just met!”

At the Olympic Park the following day, he was boisterously cheering on British Paralympians. Phew! A return to business. As usual.

“He carries a heavy burden,” wrote Ingrid Seward, editor of Majesty, in The Telegraph. “He is a young man with raw energy…with the country’s pride riding on his shoulders. He is happy to submerge himself in the camaraderie and protection of his Army life and allow his brother to do the ‘prince’ bit. Harry is Harry, and although his high jinks hurt him, he will not change and his playboy ways show no signs of abating.”

Andrew Morton, Diana’s biographer, wrote: “Harry has Spencer blood flowing through his veins—headstrong, reckless and competitive. Yet there are questions about his judgment and he will need no reminding that he must measure everything he does by the time-honored phrase: ‘how will it affect the queen?’”

In the age of iPhones, this young man is really now too old to know worse and that everything he does in public makes good fodder for the tabloids. Still young enough for new shames, but getting too old for new embarrassments. Some boundaries of propriety and decency were transgressed, but life moved on.

Harry lives a glossy life of privilege, but also a life of duty and responsibility. Did the 27-year-old go to Vegas with the intention of visiting the Liberace museum and catching a Celine Dion concert? Did he lose his moral bearings?

Are you nuts? We have largely shrugged this off: just a little storm in a very British tea cup, a summer squall.

London mayor Boris Johnson—himself no stranger to scandals involving females who are not his wife—quipped: “The real scandal would be if you went to Las Vegas and you didn’t misbehave in some trivial way.”

In recent days, the travel industry has reported a 30-percent hike in the sale of package holidays to Vegas. Hah! So, for now, a farce to be reckoned with.

In future years, of course, this kind of behavior will be hard to condone. Harry will be wise to heed Murdoch’s advice: “Avoid playmates with cameras!”