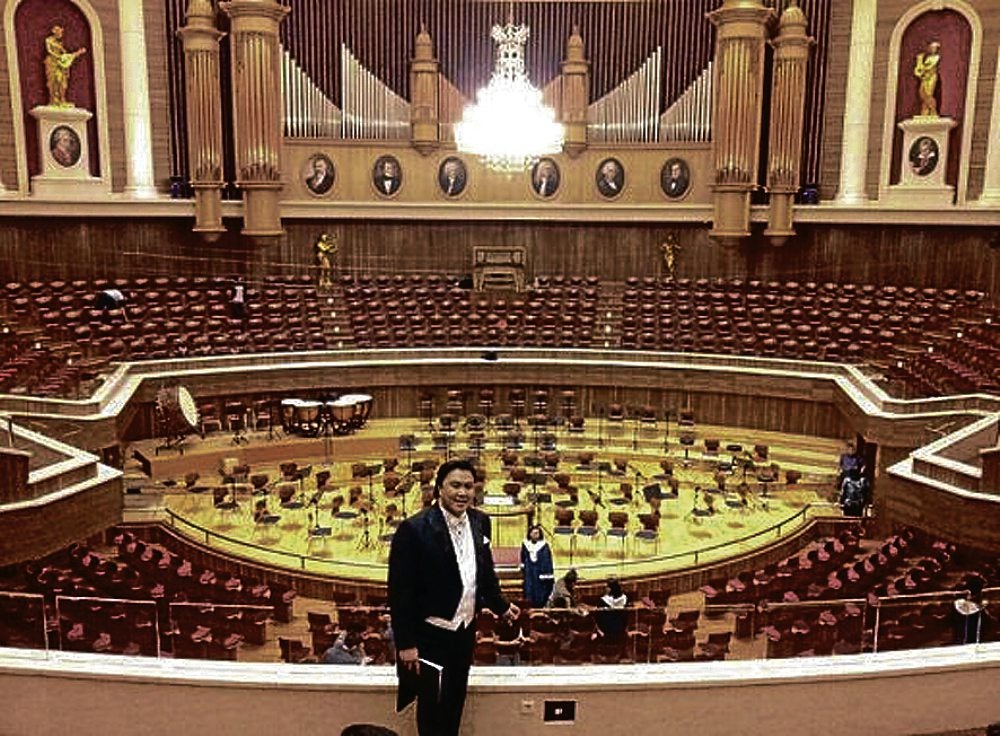 Indonesian music-lovers got a taste of Filipino musical talent when baritone Noel Azcona and soprano Rachelle Gerodias proved their worth as star soloists in a recent weekend performance of Beethoven’s Ninth Symphony at the Aula Simfonia concert hall in Central Jakarta.

The Filipino soloists were one in saying that the acoustic of the hall was fantastic.

“The design of the hall is a combination of modern architecture mixed with Baroque and Romantic designs,” said Azcona. “It is impressive!”

The concert was mounted by the Jakarta Oratorio Society, with the Great Wall String Quartet and the Jakarta Simfonia Orchestra under the baton of Stephen Tong.

The concert was another eye-opener for the Filipino baritone, last heard in the last CCP performances of “Barber of Seville” and “La Traviata.”

“Yes, this is my first time in Jakarta and my third performance as baritone soloist in Beethoven’s Ninth,” said Azcona, who is also soloist of the world-acclaimed UST Singers.

He will sing Escamillo in the October production of “Carmen.” He will be singing the Beethoven part again on Dec. 10 in Hong Kong, with the Hong Kong Bach Choir under Jerome Hobermann.

Regarded as   one of Beethoven’s greatest works, and considered by many as the greatest piece of music ever written, Beethoven’s Symphony No. 9 in D Minor, Op. 125, is a classic example of a symphony using human voices.

Italian composer Giuseppe Verdi, in a letter written April 20, 1878, praised the first three movements of the symphony but noted the parts for voices in the last movement were badly written.

Azcona said the voice part was one of the most difficult and the most challenging for a singer: “The tricky part about the Ninth Symphony is that soloist vocal lines are written in such a way like it was written for instruments with high tessituras and big leaps. Even my lines have an Alberti bass line, which is difficult for a singer.”

He rated his opening recitative of “O Freunde” as “quite manageable,” and the well-known melody of the Ninth as “very singable.”

“I could go on about the ensemble singing, which is quite challenging,” he said. “Each singer much know each other’s temperament and note how they sing their lines. We must have cohesion.”

Azcona said the most difficult of the ensemble parts was the “Alle Menschen Werden Brader” section: “Each soloist displays each vocal line without any aid from the instruments. So you are left to your wits on how you should go together as ensemble.”

Azcona said his participation in several productions staged at CCP made him realize that singing opera is not just about familiarizing with the music.

“In the last 10 years, I think I have grown a lot doing those operas staged at the CCP. I have worked with brilliant directors such as Floy Quintos, whose imagination has given me a lot of inspiration to dig deeper into the character I am portraying.”

Azcona said a few pointers which he took to heart every performance were: Always leave something for the audience during the actual performance. Research your character, how he came to be, his purpose, some subtext.

“In the end, it’s not just learning your notes or your music,” he said. “You have to convince your audience that you are that character. It will reflect in your singing if you do it right.”

An acclaimed soloist of the UST Singers for 12 years, Azcona has just earned a Bachelor in Music from the UST Conservatory of Music. He will pursue a master’s degree abroad.

He gives the UST Singers credit for teaching him teamwork while not losing focus.

“Differences in interpretations and temperaments are bound to arise. So you have to be patient in both music and in life. Music is the best medium to win the hearts of different people. You just have to work hard for it.”