‘Un Cuento Chino’: When a cow falls from the sky and other mis/fortunes | Lifestyle.INQ ❮ ❯ 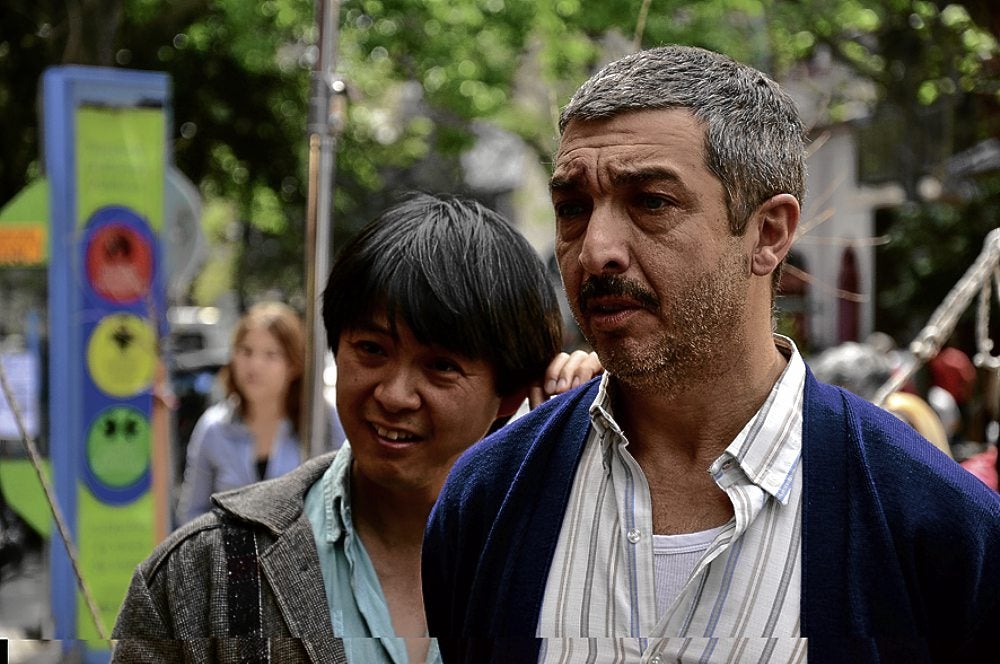 ‘Un Cuento Chino’: When a cow falls from the sky and other mis/fortunes

Set in the Buenos Aires of Jorge Luis Borges, “Un Cuento Chino” (2011), directed by Sebastián Borensztein, begins with an exotic scene on a river in far-away Fujian, China, with two lovers on a wooden boat on a perfect day.

The man dressed in fine silk sings a love song to his comely beloved, and then goes into the covered part of the boat to retrieve a diamond ring for her to wear on their wedding day. And just as he is going back to where she is seated, a cow falls from the sky straight onto her! As the camera suddenly pans out, the unthinkable event is seen as a little boat breaking in two on an otherwise serene river, and we hear the young man’s cries of anguish reverberating in the placid atmosphere.

The film cuts immediately to a busy street in Buenos Aires where the Ferreteria de Cesare, a hardware shop of Roberto de Cesare, is located. He is a middle-aged grumpy man with fixed habits worn from years of counting nuts and bolts, and every single nail he orders from his cheat-of-a-supplier. He had inherited the hardware store from his father who had died soon after seeing his only son in a newspaper photo as a soldier going off to war against Britain over the disputed territory of the Falklands.

On his return he took care of his mother, and when she died Roberto lived by himself. Now, the soltero comes home to the apartment connected to his shop, cooks his evening meal and talks to himself about the stupid customers of the day who came to his hardware store. After eating, he reads his newspapers then goes to bed. But not before his bedside table clock ticks to precisely 11 p.m.

Roberto has a few sources of entertainment to lighten up his dreary routine. Aside from ordering by mail delicate glass animal figurines for the collection he keeps in honor of his late mother, he enjoys on weekends watching the airplanes that land in and take off from his city, and relishes every night adding to his collection of news clippings on the absurd and incongruous in daily life.

Right after his evening meal, he sits down to read the newspapers that he buys in bulk from his neighbor. When he finds something interesting to clip, he first reads it aloud to himself, imagining himself in the character’s shoes and getting a big kick out of the seeming absurdity of the event. One of these events makes him laugh to himself as he imagines the news story of a “Fatal Romance,” where the lovers making love in their parked car reaches their shuddering sexual climax at the same time as the car’s brakes get accidentally released and the car plunges into the deep ravine.

Thus his life’s habits moved from day to day until one weekend morning, while he’s sitting on his chair near the airport, he observes a young Chinese man being thrown out of the taxi, screaming agitatedly to the departing driver. Roberto decides to go near to help the young man, who apparently just landed in the city and who spoke not a word of Spanish. Defying the linguistic opacity between them by using body language, the young man shows Roberto an address in Buenos Aires written on his inner arm. Roberto eventually learns that the young man’s name is Jun (played by Ignacio Huang) and that he is desperately looking for his Ta Puo, an uncle who had settled to do business in Buenos Aires, and who could take him in and even employ him.

Jun’s quest for his Ta Puo inevitably becomes Roberto’s quest, albeit quite begrudgingly, since the middle-aged bachelor does not exactly want to be involved and cannot not imagine having an alien who does not speak his language living under his roof. Jun’s accidental falling into Roberto’s life seems like a misfortune, and the changes this event makes seem intolerable to Roberto. But Roberto also knows that what’s more intolerable is to be conscience-stricken, like that time he tried to abandon Jun on the highway. The bachelor even tried losing Jun when they were searching for the lost uncle in the Chinatown of Buenos Aires.

While Jun’s uncle still had to be located by the Chinese Embassy in Buenos Aires, Roberto had no choice but to put him up in one of the rooms of his house. Roberto tries his best to put some order into the mess that this absurd misfortune does to his regular routine.

He even devises a visual system by which he can be assured that Jun understood that his stay had to be within the tolerable limit of a week. In exchange for shelter and food, Jun cleans up Roberto’s yard of accumulated junk and whitewashes the walls of the yard. It is an easy task for the 25-year-old Jun, who had previously worked as a toy painter in a factory in China.

But Jun wasn’t the only one bringing some change into Roberto’s sedate life. The vivacious Mari (Muriel Santa Ana) comes visiting her brother’s family, just a few houses away from Roberto’s place. She is the fantasy of Roberto’s lost youth, but theirs was a relationship that never materialized in a marriage. Roberto still desires her, but is determined to stick to his usual ways.

Even when she declares to him her affection, citing his goodness and capacity for “nobleza y dolor,” Roberto chooses to remain distant and unmoved by her demonstrations of affection for him. Mari inevitably meets Jun when she invites Roberto over for dinner in her brother’s house. The following day she brings Jun around the city on an enjoyable excursion while Roberto stays put in the hardware store dealing with the drudgery of unlikable customers and cheating suppliers. When they come back, she recounts to Roberto the pleasures of the sightseeing tour, all the while trying to sense where she stands in Roberto’s curmudgeon heart.

The different strands of the separate lives of these three ordinary characters are delicately handled in the last part of the film, the writer’s and director’s eye firm on the narrative. After the lost uncle is found at last, Jun can now move on to another city in Argentina, to another phase in his life.

Before the young man leaves, there is a tussle between him and Roberto, via a Chinese takeaway translator, on life’s meaningfulness versus its meaninglessness, as personified by their different views and choices. This argument comes to a head in the film’s quiet moment of revelation, like the faint echo of the splash in the river when a wooden boat is broken into two, or the forlorn cry of the lover forsaken forever.

Roberto soon realizes that this unusual turn of his life is at an end and that he could now continue his old routine where he left it off. But would he? Would Jun’s eloquent visual reminder of cows falling from the sky convince Roberto to take life by its proverbial horns?

“Un Cuento Chino” would have been a comedy were it not for its narrative’s no-nonsense realism. The chosen solitary life of Roberto is given depth by the sensitive acting of Ricardo Darin, whose expressive face speaks of his character’s doggedness in living a life of chosen isolation. But Roberto’s is not a doggedness borne out of a hostile personality. It is sprung from a man’s deep distrust of letting others into his private life and an equally deep dislike for revealing his inner self to another. He does not live to be likeable to others and insists on being himself, by himself.

It is because of his stoic sense of integrity that I became involved in the life of Roberto, curious about his transformation in the same way he becomes curious when he accidentally gets involved in Jun, in another person’s story. Isn’t this perhaps one of the possible reasons why life’s accidents andmis/fortunes may not be completely meaningless?