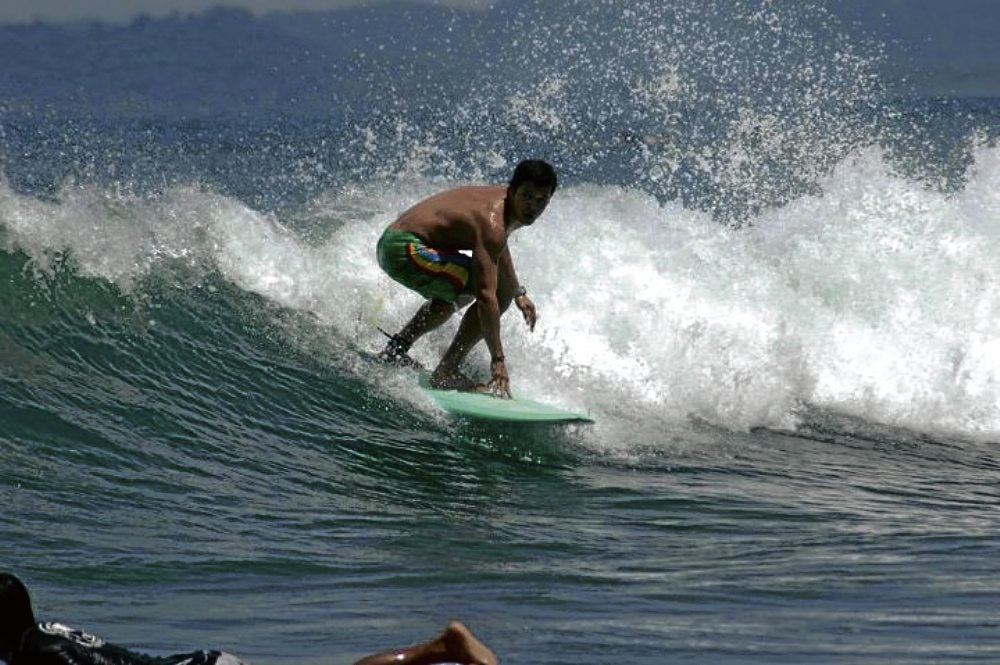 There is something therapeutic and transformative about waking up to the crashing sounds of the surf, feeling the clean ocean breeze, spending hours paddling, trying to catch the waves and riding them all the way to the beachfront.

To actor Jericho (Echo to the media) Rosales, the ocean has become a sanctuary from the chaos of urban life.

Aside from performer, director, producer, advocate for education and the environment, he’s added surfer and brand ambassador for Collezione C2 to his credentials.

“I used to do motocross but I stopped because it’s prone to accidents. I don’t want to break my back or leg. It’s dangerous for surfing. But I do soccer, boxing, running, skateboard. I’ve tried parkour, ice hockey, snow boarding, cliff jumping. When I was young I played baseball,” he says.

Twelve years ago, after a knee surgery he needed after injury suffered while playing basketball, Rosales went to the beach for his leg therapy. He now regrets not being conscientious enough to finish his therapy—he ended up compensating for an injured knee muscle with other muscles and suffering from more injuries.

With the help of orthopedic surgeon George Canlas (coincidentally, a surfer), Rosales got back in shape.

He took surfing lessons under a Japanese named Hiroshi Yokohama and seasoned surfers from La Union. Every month, he checks out the swells and the low-pressure areas and goes to Pagudpud, Ilocos Norte; Zambales; Baler, Aurora; or La Union.

Although he’s been to major surf spots in Australia, Indonesia, Hawaii and San Diego, the Philippines is still the best, for him. “Friendly people, warm water. You don’t have to wear wet suits. It has the cleanest beaches,” says Rosales.

“This is my life outside of show biz. The waves are really good, especially in Pagudpud. I wish they wouldn’t destroy that part of the country. Sometimes development is the enemy of nature.”

The 33-year-old actor describes his surfboard as “old school,” like the 10-ft boards popular in the ’70s. He favors boards with single fins.

“Surfing can be an aggressive sport,” he says. According to two surfing studies published by “The Journal of Strength and Conditioning Research,” it takes enormous amounts of cardiovascular and muscular strength to paddle the waves, hang on to the surf board waiting for the swell, catching the wave, and recovering from the ride. In the end, the studies indicate that one has to pump iron in the gym before climbing on a surfboard.

To Rosales, however, the attractions of surfing are the carefree and laid-back vibe, the ineffable oneness with the ocean—and the fat-free body. Check out their blog and you’ll see washboard abs of Rosales and his colleagues.

“It changed my life,” he declares. “It affects my schedule and dictates my way of living—clothes, food, vehicles. We become more concerned about the environment. Our playground is the beach. If it gets destroyed, then no more. We are obliged to take care of it. In Manila, you don’t see the other side of life—being with the locals who enjoy life without much technology. You get a different viewpoint. It has simplified my life.”

Every time Rosales comes home from the beach, he is bombarded by the billboards, the traffic and urban decay. “In the provinces, you don’t inhale pollution. You don’t want that in Manila. We surfers try to bring what we learn from provinces to Manila. If only we can promote bicycles, we could have cleaner air. If we can help prevent floods, we will.”

During the great floods of Ondoy in 2009, Rosales and his friends climbed their surfboards and distributed food. Last August, when the metropolis was inundated again, Rosales was in Australia. The most he could do was facilitate. “People would tweet, ‘We have no food.’ ‘Hey Jericho, we need help.’ I would retweet so that my followers would know and help.”

He and his best friend, architect Giancarlo “Buji” Libarnes, formed Coast Thru Life (CTL), an initiative to help society using the sport.

“We go around different surf spots, bring our ’60s laid-back vibe, and help kids,” he says. They launched their group in a surf event that drew professional surfers, and held surf clinics.

CTL partnered with surfers from Malibu who brought Waves for Water, an international initiative which distributes filters to make water potable in public schools and communities.

“We filter, they drink it,” says Rosales. “Our idea was to do something for the communities where we surf.” His vision is to be in a program involving children.

Rosales also has a water-related advocacy—Hope in a Bottle organized by the Friends of Hope, which aims to build more classrooms for public schools. Rosales recalled that he himself went to six public schools in elementary and in high school.

“I was a personal driver, pizza boy, I got an offer to join Mr. Pogi contest,” he recalls. That led him to acting, music and directing; eventually, he plans to establish a production company.

The  attributes of fashion, patriotism and artistry are what Rosales shares with sporty brand Collezione C2.

In the past three years, Rosales chose not to endorse any apparel brand so he could enjoy his own fashion style—which is basically clothes that breathe.

He adds, “I wanted to show people the sports side of me. I stayed focus on being healthy and strong.”

At the press launch of Rosales as the brand ambassador, he wears an updated version of the classic striped shirt, which is emboldened by the various strong colors and widths.

Collezione C2’s head honcho Jose Enrique Qua waxes proud that it is a true-blue Filipino brand whose apparel is on par with Lacoste and Ralph Lauren because of the strong design, quality of materials and workmanship.

“We want to capture the imagination of the youth by being relevant to today’s generation. We want to celebrate the best of the Filipino with our new collection, to be launched on Oct. 16 at the Rockwell Tent. It will include such icons as the maya bird, the Makati skyline and the carabao that are interpreted in a novel way,” says Qua.

“Collezione C2 is stylish and nationalistic, which injects excitement to the brand,” says Rosales.

Before you start swooning, Rosales maintains that apart from choice of clothing, surfing has also influenced his romances. He taught his girlfriend, Kim Jones, a TV host who is part Filipina, British and Chinese, how to hit the big waves.

“Surfing has changed everything. It’s going to be difficult if I’m out on the water all day and my girlfriend stays in the room doing nothing. I injected the surf bug in her. It helps that both of you like the same thing.”