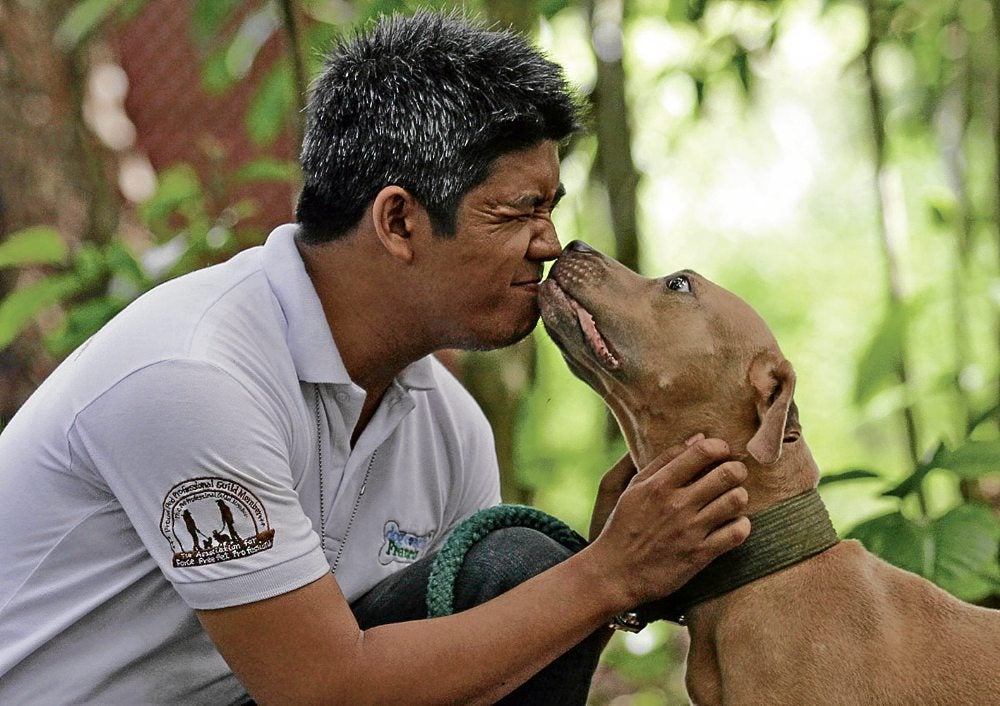 These dogs have been through much pain. You can’t counter pain with pain.”

That was dog behavior consultant and “dog coach” Francis Cleofas talking, as he lovingly stroked the head of a gorgeous, sunshine-colored pit bull named Goldie.

From her healthy countenance, gentle face and happy demeanor, and the way she relished being handled, one would never have guessed that Goldie is one of the remaining 171 surviving Laguna pit bulls—dogs once considered fierce, dangerous fighting machines.

It took months of care and hard work by volunteers, but today, according to Cleofas and the animal welfare organization Compassion and Responsibility for Animals (CARA), a dozen of these dogs, including Goldie, are ready to be adopted.

Last March 30, authorities rescued almost 300 pit bulls when they raided dogfighting facilities in Sab Pablo and Calauan, Laguna. The perpetrators, Korean nationals who were just recently found guilty of illegal gambling, animal abuse and sanitation violations, were the same people behind an earlier operation, busted on Dec. 2, 2011, in Indang, Cavite.

Since then, several of the Laguna animals have succumbed to wounds and infections from injuries sustained from the fights, as well as illnesses due to unsanitary conditions and neglect. The dogs were heavily chained to steel drums, their only shelter from heat and rain.

Through the work of two animal welfare organizations, CARA and Island Rescue Organization (IRO), the dogs were finally relocated to a new site in Batangas, away from the scene of their suffering, and they now live in clean, comfortable cages with tarpaulin covers, shaded by trees.

Pit bull lovers Shiella Lloren and Julien Bourraux visited the dogs in March with their daughter Isabella, and the couple has been actively volunteering since; Shiella helps organize fundraising events. Jeff Diaz, who is based in Manila, comes to the shelter about thrice a week. Nica Ochoa, a young businesswoman, sought out the sanctuary through their Facebook page (SAVE THE LAGUNA PITBULLS) and is now a diligent volunteer.

Volunteers, seven full-time employed caretakers, and veterinarians from Batangas and Manila have transformed many of the dogs from frightened, filthy and wounded creatures into the healthy-looking and well-mannered animals they have become today.

Not all the dogs were fighters; many females, in fact, were kept to breed, or worse, to be “bait dogs” on which the more aggressive animals honed their attack skills. Many of the animals bear the scars from such encounters. “But you have to understand, a characteristic of pit bulls as a breed is that they really want to please,” noted Maria Parsons. “So if you train them to fight, they will do it for you, until they die.”

Last Sept. 30, Sunday, the sanctuary of the Laguna pit bulls welcomed a number of pre-screened potential volunteers, donors and adopters as well as some media folk, who were guided around the site by Cleofas, Parsons, CARA president Nancy Cu-unjieng, and volunteers such as Lloren, Ochoa, Diaz and others for the site’s first Open House.

Visitors listened to a brief program that included a showing of the documentary “Animal Blood: War on Dogfighting” by Maxine Torre, which featured the Cavite and Laguna pit bulls and can be seen online on ChannelFix. Goldie got to be petted by everyone, much to her delight.

The atmosphere was positive as Cleofas invited the visitors to go around and see the dogs, distributed over three different areas—a sick bay, a section for the adoptables and the general area where majority of the dogs are kept. An advocate of “force-free training” who would rather go for positive reinforcement than punishment, Cleofas briefed the people on how to approach the dogs, and guests were requested to sign a waiver stating their understanding of the procedure.

Still, the dogs stole everybody’s hearts. In the sick bay, the animals were recuperating nicely and looked to be in great shape. The adoptables section was easily the most popular, with dogs like Goldie, the calm, teddy bear-like Alfonso, and the playful Mona Lisa competing for attention, with the latter constantly angling to be petted.

“We believe that, yes, all of them can be eventually adopted,” declared Parsons. “But we will have an adoption team to do all the screening work.” That means that nobody can just walk away with a pit bull; the potential owner must qualify by, among others, making visits to the shelter, being open to a home visit to ensure that he or she has the facilities to care for the dog and does not intend to use it for fighting, and by being open to guidance by Cleofas on how to handle the animal.

In fact, applicants are asked to choose more than one dog, so there are options to find the ideal match between owner and animal. Complete requirements are on the website helpsavethepitbulls.com.

“We hope to have a lot of adoptions,” said Cu-unjieng after the event, “and attract more people who can help in the rehabilitation of the dogs.” Also, with the dogs consuming three big sacks of dog food a day, a supplementary sack of rice a week, and vegetables to augment their diets, food supply is a constant concern.

As the Christmas season approaches, CARA is hoping to tap the goodwill of donors who can pledge monthly donations—a company or a group of friends, for example, can commit to donating, say, five sacks a month, or making a monetary contribution to help pay salaries and maintain the site.

The Laguna Pit Bulls’ first Open House seemed to augur well for the dogs’ future. With the help of more concerned animal lovers, more work and patience, and the love of the right owners, there may indeed be a chance that these long-suffering animals will find every regular dog’s dream: a “forever home.”

To donate, volunteer, or apply to adopt, check out the SAVE THE LAGUNA PITBULLS page on Facebook, e-mail [email protected] for information, or check their website at helpsavethepitbulls.com, or CARA’s website www.caraphil.org.