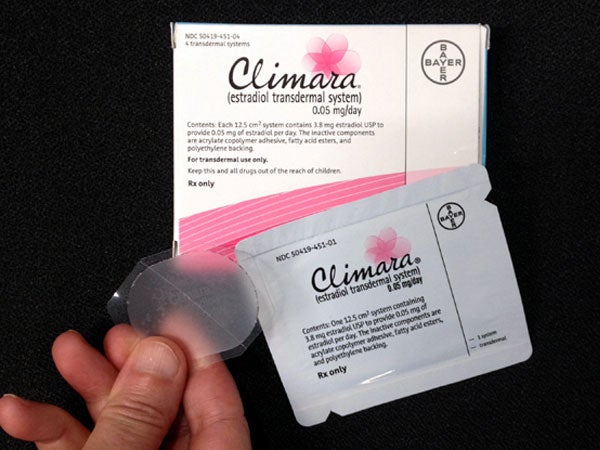 This Tuesday, Oct. 2, 2012 photo shows Bayer's Climara low-dose estrogen skin patch. A new study may reassure some women considering short-term use of hormones to relieve hot flashes and other menopause symptoms. Starting low-dose treatment early in menopause made women feel better and did not seem to raise heart risks during the four-year study. AP Photo

Benefits seen in hormone use early in menopause

A new study may reassure some women considering short-term use of hormones to relieve hot flashes and other menopause symptoms. Starting low-dose treatment early in menopause made women feel better and did not seem to raise heart risks during the four-year study.

However, the research didn’t address the risk of breast cancer, perhaps the biggest fear women have about hormones since a landmark study a decade ago. The new one was too small and too short for that.

Still, it is the first fresh research in many years on the sometimes confusing effects of hormones on women’s health. The advice remains the same: Use hormones only for severe symptoms — not to prevent bone loss or aging-related problems — at the lowest dose for the shortest time possible.

“The benefits outweigh the risks when hormone therapy is used for symptom management with relatively short-term treatment,” said Dr. JoAnn Manson, preventive medicine chief at Brigham and Women’s Hospital in Boston. She was a study leader and will discuss results Wednesday at a conference of the North American Menopause Society in Orlando, Florida.

For decades, doctors believed hormone pills helped prevent heart problems and were good for bones and minds. That changed in 2002, when a big federal study was stopped because women taking estrogen-progestin pills had higher rates of cardiovascular disease and cancer.

Critics pounced on the study’s limitations. Participants were well past menopause — 63 on average — and most were not seeking symptom relief. Many were overweight and smokers, and at higher risk of heart disease to start with. Only one type of pill in one dose was tested.

Women who could take estrogen alone — those who had had hysterectomies — did not have the risks that women on the combination hormone pills did. In fact, they had lower rates of breast cancer.

These factors led many experts to think some hormones might help certain women, and that the type and dose might matter. The new study tested that.

It enrolled about 700 healthy women ages 42 to 58 within three years of menopause. They were given either low-dose estrogen pills (Premarin, made by Wyeth, now part of Pfizer Inc.), a low-dose estrogen skin patch (Climara, made by Bayer), or a placebo. Women on estrogen also received Prometrium, a progesterone that more closely mimics what the body makes.

All women received a patch and two types of pills, but some of those were fake treatments and neither they nor their doctors knew who had the real medicine versus placebos until the study ended. That is standard study design to test who is really helped by a medication.

The main goal was seeing whether hormones made a difference in hardening of the arteries, a precursor to heart disease, as seen on imaging tests. Other health measures also were tracked. After four years, doctors found:

—No effect on blood pressure or artery hardening.

—Estrogen pills raised good cholesterol and lowered the bad form, but also caused triglycerides (another type of fat in the bloodstream) to rise.

—Estrogen patches did not affect cholesterol but improved blood-sugar levels and insulin sensitivity, possibly making them a better choice for overweight women at risk of diabetes.

Patches and pills have different effects, said Dr. S. Mitchell Harman, an endocrinologist and director of the Kronos Longevity Research Institute, a Phoenix-based group with no industry ties that paid for the study. Oral estrogen goes straight to the liver, resulting in higher concentrations than when it’s absorbed through the skin. That raises blood-clotting factors that might be especially harmful to smokers. But higher estrogen levels also cause the liver to make more HDL, or good cholesterol. So estrogen can have good and bad effects depending on the form, he said.

Skin patches account for just 2 percent of hormone use, some studies estimate. Besides Climara, at least one other is on the market — Vivelle-Dot, sold by Novartis and Noven Pharmaceuticals Inc. A generic version is expected in about a year.

Dr. Sanjay Asthana, a geriatrician at the University of Wisconsin-Madison, led a separate analysis that found estrogen pills and patches improved depression and anxiety but had no effect on cognition or memory. The National Institute on Aging paid for that study.

Women need to realize the new study is much less definitive than the big federal one that found more lung and breast cancer deaths among women on estrogen-progestin pills, said one researcher involved in the earlier work, Dr. Rowan Chlebowski of the Los Angeles Biomedical Research Institute at Harbor-UCLA Medical Center. It would be unwise to try to prevent certain health problems by using a treatment “that increased the two leading causes of cancer deaths in women,” he said.

Manson agreed that hormones should be used only for severe symptoms. Two study participants found they helped.

“My mood leveled out. I found that I was just generally calmer” on the estrogen patch, said Kathy Smerko, 60, a nurse practitioner from Phoenix.

Dianne Fraser, 56, an accountant from suburban Boston, said the patch eliminated the drenching sweats that woke her in the night. She was able to quit treatment after five years and seldom has problems now.

“It was enough to get me through that crazy period” right after menopause began, she said.