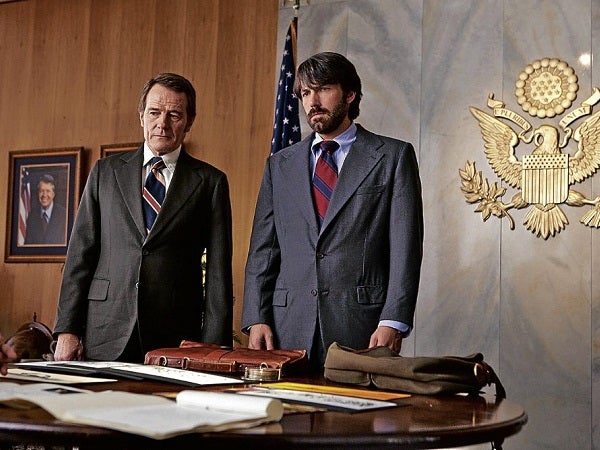 It is amazing watching a director climbing to the heights of his possible powers. However you might feel about Ben Affleck as an actor, he is unmistakably better as a director—and getting steadily better.

From his feature-film debut, the tragically claustrophobic “Gone Baby Gone” in 2007, to the criminal stepladder suspense of 2010’s “The Town,” Affleck now tackles his biggest and best project in the everyman cloak-and-dagger thriller “Argo.”

Based on actual events, “Argo” happens in Tehran in 1979, at the frenzied tipping point of the religious revolution, when Iranians storm and occupy the American Embassy. In the commotion, six embassy employees flee into the streets, finding shelter at the Canadian ambassador’s residence.

As the Iranian revolutionary guard intensifies efforts to find all the Americans, the Central Intelligence Agency brings in its best exfiltration expert, Tony Mendez (a grizzly Affleck) to conceptualize and execute a clandestine plan so audacious, it sounds really stranger than fiction.

As the perfect cover, Mendez recruits seen-it-all Hollywood special effects expert John Chambers (an actual person, played by John Goodman) and cranky producer Lester Siegel (a composite character, played by Alan Arkin) to begin production on a fake science fiction movie called “Argo,” which will scout for possible locations in the Middle East—in Iran, naturally—and that will allow the trapped Americans to escape disguised as Canadian members of the film crew.

It’s so unbelievable, but Mendez believes it’s the only chance they have. While his Hollywood cohorts drum up real support for a movie that will never be made, Mendez travels to Tehran, where he must prep and move the bewildered and skeptical Americans before the Iranian soldiers find them.

It will not be easy, as last-minute obstacles threaten their escape and the Americans begin to doubt their chances. “I think my little story is the only thing between you and a gun to your heads,” Mendez tells them.

Since this actual mission was only declassified in 1997, the production team had to make the late 20th century come alive again through every method they had. Using old news footage and still photos as a basis, they recreated November 1979 in exacting fashion, building period-perfect facsimiles of Los Angeles and Tehran both. Even the hairstyles fit. 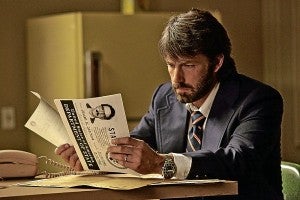 In the same spirit, “Argo” not only went out of its way to find actors who actually closely resembled the real people they played, but also found an able group of character actors (led by veterans Tate Donovan and Clea DuVall) who gave the film a firm verisimilitude.

The film is further bolstered by solid turns from “Alias” spymaster Victor Garber as laconic Canadian ambassador Ken Taylor, and “Breaking Bad’s” Bryan Cranston as Mendez’s fiery CIA boss Jack O’Donnell). In a performance that fits the kind of disguises he creates, Affleck vanishes into the muted role of Mendez, realistically portraying the kind of frayed, determined personalities who populated the real world of espionage.

Following his take on the charismatic Boston bank robber in “The Town,” Affleck clearly knows how to direct himself.

Beyond his comfort zone

He also knows how to direct, period. With his third feature, Affleck proves he can go beyond his comfort zone with this real-world political thriller. Despite the movie running about two hours in length, this is a case of very efficient filmmaking, with Affleck channeling the bravado of films like Steven Spielberg’s whimsical “Catch Me If You Can” with the tick-tock urgency of “Munich.”

It’s a showcase for Affleck’s unique capacity for extruding killer tension from the most mundane of activities, be it walking through a market or merely standing in line, hoping to go anywhere else, as well as his ability to elicit sincere if nervous laughter in other scenes.

It’s a delicate balancing act that is now gathering Oscar buzz like signals gathered from agents in high places.

With its clever movie-in-a-movie ploy turned inside-out, “Argo” is a brilliant, thrilling piece of spy-movie-making, with Affleck confidently showing us how real-world covert actions were really done.

With Ben Affleck’s best film yet as a director, “Argo” shows us that the most ambitious plans turn out to be the most breathtaking ones if done right.