Extra-sharp, extra-sweeping–Bengy Toda captures the Philippines ‘as it has never been shown before’ | Inquirer Lifestyle ❮ ❯ 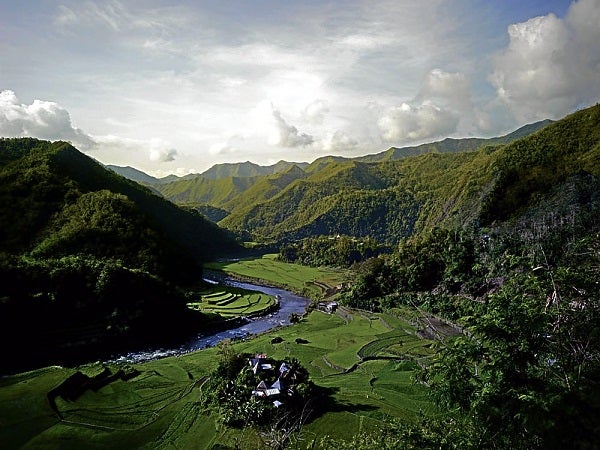 Extra-sharp, extra-sweeping–Bengy Toda captures the Philippines ‘as it has never been shown before’

She undressed for me. She gave it to me,” declared photographer-sportsman Benigno “Bengy” Toda III.

He wasn’t alluding to a woman other than his wife. He was referring to capturing the Mayon Volcano in all her full glory just a few hours before she was obscured by the typhoon.

The subject may be common but the equipment that captured it was not. Toda used Phase One, a state-of-the-art Danish camera system that is famous for landscape and detail. The picture quality of 80 megapixels provides extra sharp and extremely large images.

Toda takes his photography to new heights literally with his first-ever solo exhibit “Chasing Mountains” at the Manila Contemporary Gallery. Philippine terrain is immortalized in mural sizes to as large as 45” by 150” to give a broad and powerful impression of the scenery.

These images are about descriptions of Mount Pulag and the Cordilleras, Mayon Volcano and sunrise in Laguna. The large format creates the equivalent of the physical impact of the photographer’s expedition. The exhibit will also introduce Diasec, a patented face-mounting process of prints onto acrylic sheets which give high-image definition, vivid colors and exacting minute details.

As the owner of Studio 58 Lab 10, Toda has always been an early adaptor of the latest cameras and equipment. During the halcyon days of film, he would take panoramic shots of cityscapes with a special camera.

Two years ago, Phase One invited Toda, a local distributor of this brand, to Australia to photograph its deserts. Toda enjoyed the solitude and the contemplative process of photographing scenery.

Toda was once described as a “huntsman.” With maturity, he has evolved into an environmentalist, as his recent works reveal his empathy with Nature. A surveyor and a romanticist, he records the terrain with awe and wonder. Driven by the desire for freshness in perspective, he takes the horizons from different viewpoints—sometimes straight on or from a distance, looking with length, depth and breadth. Billowy clouds figure prominently in the images to denote that he was photographing from the apex.

In some photos of the Cordilleras, he wants the viewer to look closer where towns appear. The galvanized iron-roof houses that have sprung up create a disturbing photo of how man has imposed himself on Nature.

The luxurious shading of Toda’s photos, provided by his sophisticated equipment and post production work, seduce the eye. The vivid hues of the sunrise in Lake Sampaloc, San Pablo, Laguna, take on an abstract appearance. The superior toning process provides the topography an amazing physical presence that you wouldn’t expect from a flat photograph.

Toda’s photographic expedition started last February when he and some foreign photographers climbed Mt. Pulag, the highest peak in the Philippines.

The hiking afforded sweeping views of the mountain ranges and the Rice Terraces. For several hours, they trudged along paths that came close to the cliff’s edge, clambered over rocks and through dense forests. The trail led to lakes and waterfalls, nestled among steep boulders and foliage.

Upon reaching one of the mountain peaks, they were enveloped by clouds. Toda was caught unprepared for the weather, which was colder than usual -5ºC. Although the extreme climate would have made him flinch, a traveling companion lent him a thermal shirt so they could all reach the peak.

“When you climb up Mount Pulag, you’re over 9,500 ft above sea level; nothing prepares you for the conditions. You just grin and bear it,” he said.

He had to get in shape to do the mountain trekking. Although he plays polo, he lost weight for the expedition. The photographer added that it requires stamina and muscle endurance to ascend to those views with equipment on their backs. At times, the paths were slippery. He was also careful about his diet. On his first hike, he ate mung beans in many meals which gave him gout and knee pain.

Last May, Toda repeated his walking safari to Mount Pulag, which lasted for 10 days with 10 porters to hold his equipment. He thought that this expedition only happened with the National Geographic. But with the remoteness, he felt it was wise to be fully equipped with his cameras, tripods, backings, battery, laptop and lenses. Toda brought a lot of canned goods and Kangen alkaline water and ate the brown rice from the locals.

He described the hike as harrowing, as the guide took them to untrodden paths.

“We followed the conquistador trails,” he said. One large photograph consists of nine images that were digitally stitched to give a full-scale view of Magulong village amid the rice terraces.

For the Mayon expedition, Toda and his team left Makati at 2 p.m. and arrived in Naga at 10 p.m. They set out to the volcano at 3 a.m., waiting for the sunrise and the mist to disburse. Toda had finished taking photographs by 8 a.m. just before the typhoon came.

What’s new about the Mayon Volcano? A black-and-white image of its perfect cone, taken with a 50-mm lens, lends the viewer a feeling of intimacy with the subject, as the textures of nature come alive. In another photo, the blues and greens that surround the Mayon Volcano reaffirm its timeless beauty.

“People take the beauty of our country for granted. I want to show the Philippines as it has never been shown before,” said Toda.