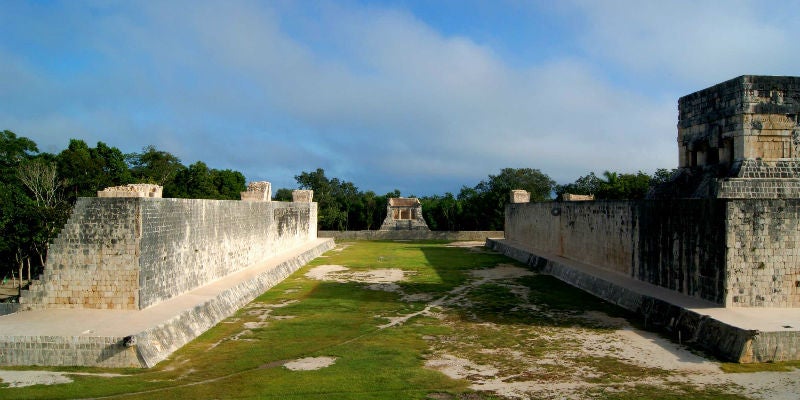 In this undated image released by Mexico's National Institute of Anthropology and History on Oct. 5, 2012, shows a ceremonial ball court at the temples of Chichen Itza on the Yucatan Peninsula, Mexico. Mexican archaeologists say they have determined that the ancient Mayas built watchtower-style structures atop the ceremonial ball court to observe the equinoxes and solstices, and they said that the discovery adds to understanding of the many layers of ritual significance that the ball game had for the culture. (AP Photo/INAH)

MEXICO CITY — Mexican archaeologists say they have determined that the ancient Mayas built watchtower-style structures atop the ceremonial ball court at the temples of Chichen Itza to observe the equinoxes and solstices, and they said Friday that the discovery adds to understanding of the many layers of ritual significance that the ball game had for the culture.

The structures sit atop the low walls of the court, where the Mayas played a game that consisted, as far as experts can tell, of knocking a heavy, latex ball with their elbows, knees or hips, through a stone ring set in the walls.

The bases of the structures — essentially, look-out boxes set atop the walls, each one with a small slit running through it —had been detected before, but archaeologist hadn’t been sure what they were used for. Since the ball court was built around 864 A.D., the boxes and the stairs leading to them had crumbled.

The government’s National Institute of Anthropology and History announced Thursday that the boxes had been 90-percent reconstructed, based on the stone footings that remained. Late last year and early this year, a team led by archaeologist Jose Huchim confirmed that the sun shone through the slit-like openings when the setting sun touches the horizon at the winter solstice.

The sun’s rays also formed a diagonal pattern at the equinox in the slit-like openings, which are about tall enough to stand up in.

Huchim said he knew of no similar structures at other Mayan ball courts. “This is the place where we’re finding this type of pasaje (structure),” Huchim said. He said a stone structure atop a ball court at the nearby ruin site of Uxmal appeared to have been used as a sort of spectators’ stand for elite audiences.

It may have also been used “like a calendar, to mark important periods for agriculture,” like planting the core crop of corn.

Finally, Huchim noted that old descriptions of the ball courts sometimes depicted people atop the walls, and that they may have been acting as umpires in the game.

Huchim said Thursday that stairways to the structures are being restored so visitors can observe the phenomenon.

Boston University archaeologist Francisco Estrada-Belli, who was not involved in the project, said the solar sighting lines were part of “part of Maya architecture and cosmology.”

“The fact that the sun rise can be observed behind a structure should be understood in that sense, as reverence to the sun or other star, not necessarily as an observatory in the technical sense,” Estrada-Belli said. The orientation of the structures “emphasized the sacrality of the ritual space.”