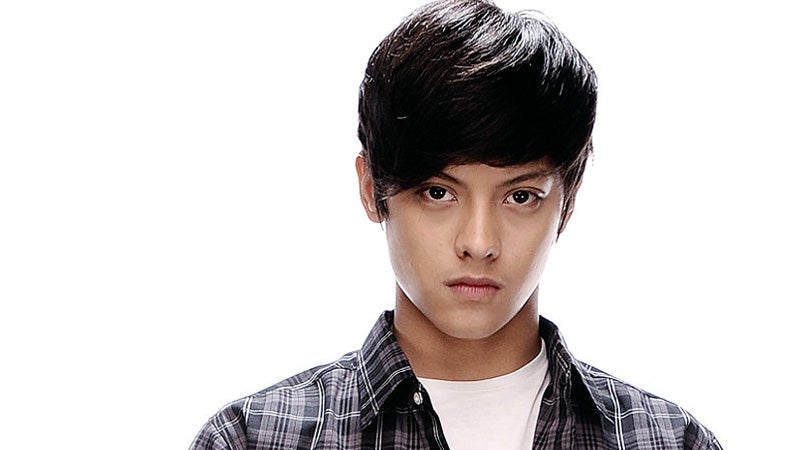 Someday, with age, Daniel Padilla could morph into a different kind of star, but right now, at 17, he just might be our first bishonen idol.

Bishonen is Japanese for “beautiful boy,” and refers to a character type common in manga, anime and other forms of Asian entertainment.

An anime website describes bishonen as “a male character that possesses androgynous or ’feminine’ physical traits. He is usually tall, slender with almost no fat, usually little to no muscle, and no body or facial hair. Large, expressive eyes are almost a given…”

The above description fits Padilla to a T, down to the peach fuzz on his upper lip.  He’s got smooth brown skin, elegantly arched eyebrows, cupid’s bow lips.  Some wags have remarked that he’s prettier than frequent co-star and ka-love team Kathryn Bernardo.

And the floppy hair, often described as Justin Bieber-ish, could just as well belong to a character from “One Piece” or “Bleach.”

The combination of feminine facial features (Daniel’s family resemblance hews closer to his mother, actress Karla Estrada, than dad Rommel Padilla), with just a hint of a decidedly masculine swagger (he is a Padilla, after all) is a killer combination.

No wonder the girls (and women, and not a few girly-men) are swooning.  In one recent mall tour to promote his platinum-selling eponymous debut album, his presence nearly caused a stampede.  Stalls were reportedly damaged in the crush of fans pressing to get a glimpse of their idol.

No doubt, the boy’s got something.

We are backstage in a major network’s studio where Daniel is making an appearance at a noontime variety show. Good-looking young men and women are a dime a dozen out here, but Daniel stands out because he looks like he’s not trying to stand out.  Dressed in skinny jeans (with his boxers hanging out) and a Penguin shirt, occasionally donning the plastic-rimmed glasses he affects, Daniel seems to hang back while everyone else, with their mousse’d hair and gym bodies and off-the-rack clothes, seems to be trying too hard.

Yet it is Daniel who seems to be the center of attention.  He gamely poses for photos with both fans and co-stars, while his road manager marshals him from one on-cam appearance to the next.   In between, we get to ask a few questions.

How does it feel to be the country’s No. 1 teen star?

But when he goes out?  How did it feel to cause a near-riot?

It was only last year when Daniel was slotted in as a last-minute replacement for Albie Casiño in the teen vehicle “Growing Up,” due to the latter’s contretemps with ex-girlfriend Andi Eigenmann.  Audience response to the youngster was immediate, and he was, as the phrase goes, catapulted into stardom.

Hewing close to formula, the studio next cast him with Kathryn Bernardo in the teleseries “Princess and I,” which immediately rose to become one of the top primetime shows on ABS-CBN.  While the iron was hot, the network recorded and released a quickie six-song album, which promptly went gold, and then platinum, sealing Daniel’s star status in a matter of months.

Not bad, considering that he wasn’t that inclined to go into show business in the first place.  Daniel’s initial dream was to be a rock star, not a TV star.  He had been playing bass for Parking 5, a rock band he started with brother JC on vocals and friends.

Nothing like the mainstream pop he recorded for his debut album.

If there’s one drawback to being a star, he says, it’s the demands it makes on his time. One of his biggest regrets is that he doesn’t have as much time to play in the band.

That’s not likely to happen, but that’s the price of stardom, a price Daniel seems to accept as part of the deal.  Although he says he wasn’t really groomed by his parents to go into showbiz, he was exposed to the family business from childhood.

He admits he has gotten valuable advice from his parents and his uncle Robin.

For now, he’s just enjoying the ride, and he’s not really thinking about how far it will take him.

In all likelihood, Daniel will get his wish.  Word is he’s slated to work with Kathryn Bernardo and Vice Ganda in a movie intended for the next Metro Manila Film Festival.

Of the mythical Padilla bad-boy gene, Daniel has this to say.

“Hindi ako ma-chicks na tao.  Hindi ako magkaka-oras na maging chick boy.  Siguro kung meron man, isa lang ho (I  don’t have the time to be a chick-boy. If ever I find time for that, I’d stick to one girl).”

With one uncle converting to Islam while serving time for gun possession, another once claiming to be a brigadier general in the “H-World United Nations Philippine Military Government International Police Commission,” yet another undergoing gender reassignment, Daniel admits that the Padilla name is a hard one to live up to.

In this larger-than-life gallery, what character does he want to project?