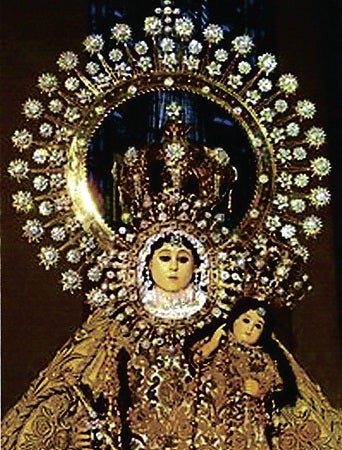 An urgent message from the office of Ambassador Mercedes Tuason in the Vatican urged Filipino priests and bishops going to Rome for the canonization of Blessed Pedro Calungsod to e-mail or SMS her assistant, Josie Bantug ([email protected]; tel. +393296856458) if they would want to concelebrate with Pope Benedict XVI or distribute Holy Communion during the Canonization Mass on Oct. 21 at St. Peter’s Square.

In celebration of the life and martyrdom of Blessed Pedro Calungsod, writer-director Francis O. Villacorta will mount the play, “Pedro Calungsod: Batang Santo,” at the St. Mary’ s College in Quezon City this October.

The play traces the beato’s life as a young catechist and missionary in the Spanish mission to the Marianas between 1668-1672 under the leadership of Jesuit priest Padre Diego Luis de San Vitores.

A Visayan by birth, Pedro served under the Jesuit priest until his death on April 2, 1672, in Tumhon Bay where he was thrown into the sea after being killed (for details, text  Francis at 0917-4682045).

Cubao Bishop Honesto Ongtioco will officiate the concelebrated Mass  in honor of Our Lady of the Rosary of La Naval de Manila on Oct. 14, 8 a.m., at the Sto. Domingo Church, which has been declared a National Cultural Treasure by the National Museum.

Fr. Giuseppe Arsciwals, OP, prior of Sto. Domingo Convent and rector of the National Shrine of Our Lady of La Naval, said that the ivory icon of La Naval de Manila is the oldest locally made Marian image. It was made in the late 16th century during the time of Governor General Luis Perez Dasmariñas, and has been under the custody of the Dominicans since then.

The Dominicans are the promoters of the devotion to Our Lady of the Rosary. Legend has it that Our Mother herself gave the rosary to St. Dominic de Guzman, founder of the Order of Preachers.

On Oct. 6-7, the Military Ordinariate of the Philippines (MOP) and Magnificat Ventures Corporation (MVC), in partnership with the City of Pasay, Barangay Villamor, Resorts World Manila and the Newport City Estate Administration, are holding the Talulot Festival, in honor of St. Thérèse of the Child Jesus, also known as God’s Little Flower.

The feast is named after the Filipino word for petal, as devotees of the Saint believe that she sends a flower, a rose,  as a sign of granted prayer. Close to 3,000 people attend the Mass and festivities every year.

The Prayer Warriors of the Holy Souls will offer Mass for the Dead on Oct. 8, 11 a.m., at the Chapel of the Nativity of the Blessed Virgin Mary at the lower level of the Immaculate Conception Cathedral on Lantana Street, Cubao.

Prayer intentions are for the souls of the victims of suicide bombings, civil revolutions, piracy, lawlessness and wanton killings; the 768 typhoon victims of “Sening” on Oct. 11-15, 1970; also, the October 2011 flood victims of Thailand, numbering more than 600; and the 604 earthquake victims in Turkey.

Hill cross to be blessed

Fr. Mariel Santos, OFM-Conventual will bless the Cross on the hill of  Dayapa in Tanay, Rizal, on Oct. 13, at 11 a.m.

Rosa Mistica Masses are celebrated every 13th of the month at the Harrison Plaza Chapel of Sta. Martha (for inquiries, text Marivic at 0918-325-6475).

The feast of Our Lady of La Leche y Buen Parto will be celebrated on Oct. 11 at 5 p.m. at the Harrison Plaza Chapel.  Mass celebrant Fr. Nick Blanquisco will bless mothers and would-be mothers, and those who have difficulty conceiving a child.

The Sisters of St. Francis of Perpetual Adoration   in Baybay, Leyte, look back with gratitude to the arrival of the four OSF American Sisters from the Immaculate Heart of Mary Province in  Mishawaka, Indiana, USA, on Oct. 11, 1962. This date marks the founding date of the Immaculate Conception Province, Philippines.

On Oct. 13, 10 a.m., a Thanksgiving Mass will be celebrated at the Chapel of the Immaculate Conception College.  The order was founded by Venerable Mother Maria Theresia Bonzel in Olpe, Germany.

Approved on July 20, 1863, by the Church, the order is involved in the education and health ministry for the poor.

Women who may want to join the religious order may contact the St. Martin de Porres Novitiate, Baybay City, Leyte, by sending an e-mail to [email protected]  or texting  0919-4086416.  They may also visit  www.ssfpa.org and www.nunsarewe.org.

The “Misa ng Mabuting Pastol,” an album of original Tagalog songs for the Mass by Fr. Angelo Caparros of the Diocese of Gumaca, will be launched at the Edsa Shrine on Oct. 10 at 7 p.m.,  with Bishop Ben Famadico  officiating the Concelebrated Mass.

The CD and songbook are available at the Catholic Book Center (Arsobispado, Intramuros), Claretian Bookstore, and other religious shops.