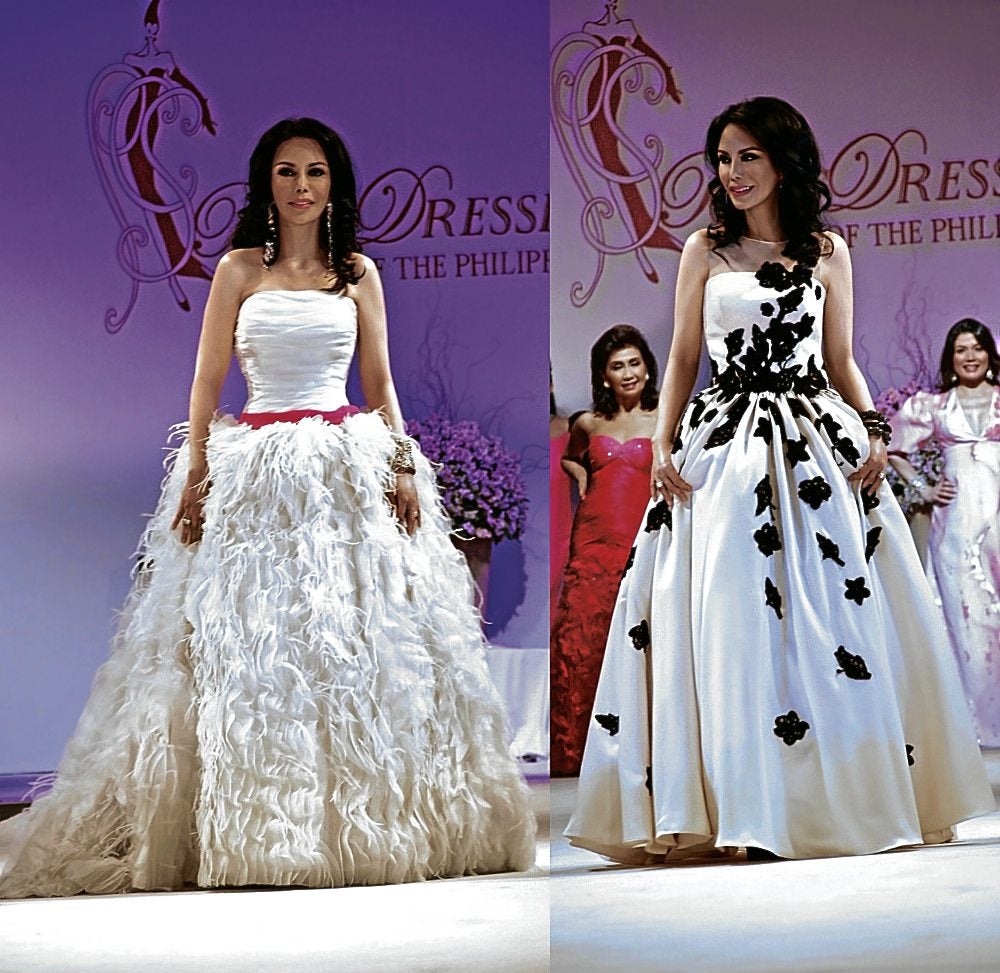 12 women, with hubbies who can afford their high maintenance, named ‘Best Dressed’

Hot namedroppables from Cosmopolitan Manille’s alta sociedad came out in full glitz and glamour—all for a worthy cause!

We are talking about the fabulous 9th annual ball of the Philippine Cancer Society to proclaim the Best Dressed Women of the Philippines, at the Makati Shangri-La’s Rizal Ballroom, dahlings.

The grand highlight was giving citation to the men and women, “who made valuable contributions for the betterment of the Cancer Society.”

Twelve golden-hearted women with husbands that can well afford their high maintenance took center stage and amazed the crowd with their beauty and charm were named Best Dressed:

Later in the finale, she wowed the crowd again in a traffic-stopping TC Alvarez   gown, drawing loud applause from the chi-chi fashion watchers, dahlings.

Naturellement, one should not fail to mention the sponsors—East West Bank, CATS Motors and Lifestyle Asia.

Already on its seventh awesome year, the 2012 Denim and Underwear fashion show gathered Bench fashion lovers and brought them to a whole new vista of fashion entertainment.

For over an hour, the audiences were transported to “a world imagined of Bench, by Bench, and for Bench!”—a world of heavenly bodies that flaunted perfectly sculpted muscles and flawlessly glowing skin.

It was supervised by overall director Johnny Manahan and top fashion show director Robbie Carmona, and at the SM Mall of Asia Arena. It was divided into five themes—Borderless, Fearless, Timeless, Limitless and Boundless.

The act was opened by versatile Mig Ayesa no less and closed with the Far Eastern Movement singing for the grand finale, palanggas.

In between, the hot-hot celebrity endorsers ruled the ramp, such as wonder boy and award-winning actor Coco Martin, and jaw-dropping hunks Aljur Abrenica, Enchong Dee and Jake Cuenca, who showed off his behind to the tumultuous applause of the swooning women in the packed audience.

Meanwhile the men in the audience couldn’t get their eyes off the stunning beauties on stage such as Lovi Poe, Carla Abellana, Kim Chiu and Karylle.

Bench continues to surprise! Its 7th Bench Universe fashion show celebrated the best that Bench has been offering to the Filipino people in the last 25 years. We know that Bench will be conquering more in the years to come, ’di bala, palanggas?

Amateur artist and my dearest soul mate, Vicky Fernadez Zubiri, has been making her mark in the local art scene since her first solo exhibit, “Memories,” in November 2009.

The sold-out show of watercolor works supported the charities of her alma mater, Assumption College, especially in the poor communities of Malibay, Pasay City.

She said watercolor is a difficult medium. “It’s fragile and challenging where one stroke too many or a drop of water too large can ruin an entire painting,” she told moi.

Her first exhibit was inspired by her many travels around the world, featuring idyllic scenes in Tuscany, cozy Parisian cafés, the azure waters of Santorini, the wilderness of Africa, and naturellement, gorgeous Philippine beaches, dahlings.

“I’m an artist,” she said. “I see beauty in everything.” This is not surprising since she has been surrounded by art since childhood. “As a child my mother used to bring me to Amorsolo while her portrait was being painted,” she said. “While growing up, I also accompanied her to the homes and studios of Manansala, Alcuaz, Ocampo and many more, as she was an avid art collector.”

She has a new show coming.

“My personal theme is birds, flying against the rain or alone over the mountains. Painting is my way of expressing my feelings.”

Painting for V. Zubiri is also therapeutic. Surviving two brain surgeries and having to cope with constant pain due to damaged nerves, she said her art-making has helped her focus her energies, transforming the negative to positive. A very Capricornian trait, I must say, palanggas.

Her painting is also a way for her to give back to society as she contributes part of the proceeds to charity.

Vicky is now all set to host her second solo exhibit “Point of Perspective: Inspired Moments in Chinese and Western Watercolor.” It will open on Oct. 16, 6 p.m., at the Manila Peninsula mezzanine. Check it out, dahlings.