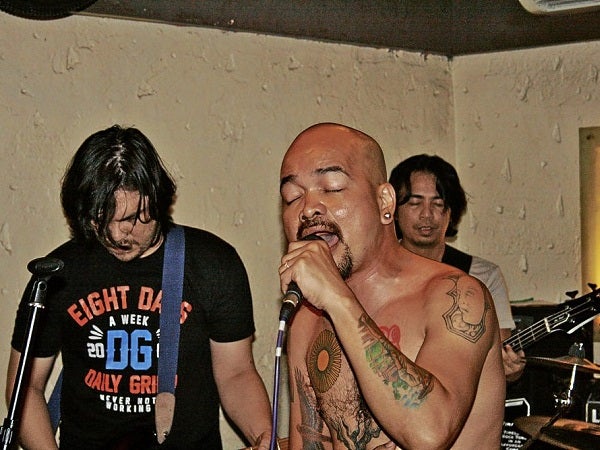 Much has been said on whether or not OPM still thrives in the local music scene. Culture critics have cited their reasons for believing that OPM has reached extinction. While their observations are valid, there are still those who believe that Filipino music is very much alive and worthy of an audience.

The album revolves around the idea of Jose Rizal coming to life and giving us a piece of his mind; it comes off as Rizal’s commentary on present-day Philippines.

In a pre-gig interview at Route 196 in Quezon City, Abay expressed his views on the supposed extinction of OPM.   He does not claim to be an expert on the music scene, but is adamant on the continued existence of Filipino music.  “As long as I am a Filipino, having a Filipino passport and I continue to write original songs and create music, to me, there is reason to believe that Filipino music lives,” he says.

Abay does not consider “Rebulto” an EP despite its seven-track repertoire.  With “Rebulto,” Abay once again proves his prolific stature as a poet. This time, however, his poetry rests against a synth-pop, electronic background. This change of musical backdrop should be a welcome treat for everyone, especially those who have yet to grow comfortable with Abay’s deployment of punk and folk elements in past projects.

Dong Abay is an eminent persona in the Filipino music landscape, and his music producers are no less: Raimund Marasigan of Sandwich/Cambio/Gaijin/ Eraserheads fame and Buddy Zabala of The Dawn, Cambio, and Eraserheads. Abay relied on Shinji Tanaka’s (Gaijin/Sound Creation Owner/Engineer) recording expertise for “Rebulto.”

Dong Abay has transcended the boundaries of a demeaning industry powered by recycled hits and dancing all-male imports with less musical talent. While the unquestionable passion and talent of Abay and other well-established musical geniuses conspire to ensure sonically worthwhile experiences for listeners, less known artists have yet to be heard and recognized.

Most of these bands may be unheard of to the vast majority, but they are as passionate, and may even evolve to be as talented as their notorious predecessors. Since major labels cannot subsist on homegrown talent, the local music industry has become a graveyard for most artists who create their own songs.

Most of us are oblivious to the fact that Filipino music continues to flourish. There are still local songwriters and musicians who record songs for the sole purpose of creating something worth listening to.  One can only wish that it were that easy to educate a hostile audience.

This proves to be a very difficult task, given that independent artists cannot afford the cost of readily accessible traditional media. Exposure can be garnered through other less conventional channels, but this is clearly not enough.

Despite hurdles, Dong Abay advises independent artists to carry on with their passion, to keep writing songs, and to continue performing for whoever bothers to listen. “As long as we write songs, create original music and people appreciate and listen to it, Filipino music lives on,” he muses.