Not just any tree, got to be native for Odette Alcantara | Inquirer Lifestyle ❮ ❯ 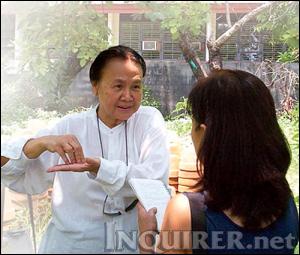 Not just any tree, got to be native for Odette Alcantara

Her fiery spirit continues to stoke the passions of her fellow earth defenders. And so it is that three years after her death, Odette Alcantara is still called upon to be the champion of the trees.

For trees, as Rabindranath Tagore once put it, “are the earth’s endless effort to speak to the listening heaven.”

Alcantara is the face and inspiration behind a new campaign launched on Thursday to save the Philippines’ native trees.

“This is the fulfillment of a long discussion we had on how do we extend the legacy of Odette Alcantara,” EDNPI president Roberto Guevarra said during the project launch at Miriam College in Quezon City.

“When it came to Tita Odette, we remember her passion for trees,” he said. In an audiovisual presentation honoring Alcantara’s memory, the caption to one slide showed one of her famous lines: “I don’t like flowers. I just want trees.”

A patron of the arts and a distinguished chess player who took part in an Olympiad in the 1970s, Alcantara died on Sept. 22, 2009, nine days before her 69th birthday. Her ashes were scattered in her farm in Tanay, Rizal, to nourish saplings that were planted that day in her honor.

An obituary in the Inquirer described Alcantara as an ardent campaigner known for her colorful, sometimes quirky, earth-saving missions, from shielding trees against urban planners to lobbying Congress for the passage of solid waste and clean air laws.

One of her more memorable “gimmicks” came during the 100th birth anniversary of President Ramon Magsaysay when she gathered more than a hundred men named Ramon to plant trees.

Alcantara also mounted protests against the cutting of trees along Katipunan Avenue, at Quezon City Memorial Circle, Arroceros Park and Intramuros in Manila.

In explaining Legacy Trees, Guevarra stressed that planting trees was not enough. The type of tree is important, too.

“Although it’s good for the environment to plant any kind of tree, we are alarmed by the proliferation of exotic trees being planted by the DENR (Department of Environment and Natural Resources),” Guevarra said.

Instead of planting native tree species such as red and white lauan, apitong and kamagong, the government’s reforestation program has focused on “introduced species” such as mahogany and gmelina, he said.

“In one visit to the DENR nurseries, we saw that most of the trees are mahogany and gmelina. We realized that we really need to do something about this trend,” Guevarra said.

Sandra L. Yap, a professor at the University of the Philippines Institute of Biology, said as much as 98.5 percent of planted forests consist of introduced species.

This may have far-reaching implications on the survival of some 3,600 native Philippine species, considering that deforestation has left only 3 percent of primary or old-growth forest cover, Yap, who is also affiliated with the Philippine Native Plants Conservation Society Inc., said.

Not enough studies have been conducted to determine how much at risk Philippine trees are, and the trees may vanish before a determination can be done, Yap said. Of the native tree species, about two-thirds are endemic, or can only be found in the Philippines.

The government estimates that only 7.6-million hectares of forest cover (including secondary) remain, representing about a quarter of the Philippines’ total land area of 30-million ha. “Open, denuded, degraded and barren” land comprise 8.2 million ha.

Yap said another potential problem with the planting of exotic species involved the effects of those trees on the local ecosystem, particularly wildlife such as birds and insects.

She cited as an example a man-made forest in Bohol province consisting mostly of soaring mahogany trees.

“It looks very pretty, like being in a different country, all these big trees going out to the clouds. What’s bad about this is there aren’t any understory plants … There’s no native wildlife. You don’t hear birds chirping,” she said.

Yap said she was told the rationale for the man-made forest was, first, for watershed and, second, for animals to return.

“They were able to succeed with their first goal, but not their second goal,” she said.

The introduced species, Yap said, can host native wildlife, as many animals are skillful at adapting. “But what about our native species that are not so quick to adapt?” she said.

Under the project, individuals and groups can adopt a native Philippine tree by supporting its propagation, planting and care or maintenance within the various project sites to ensure the seedlings will grow into healthy living trees, Guevarra said.

A seedling costs P300. The donor will receive a certificate of adoption indicating the species and the number of seedlings adopted, the GPS location of the planting site and the series numbers to be used in the Legacy Trees Logbook.

For donations reaching and topping P5,000, a certificate of donation will be issued to the donors, enabling them to deduct the amount from their annual income tax.