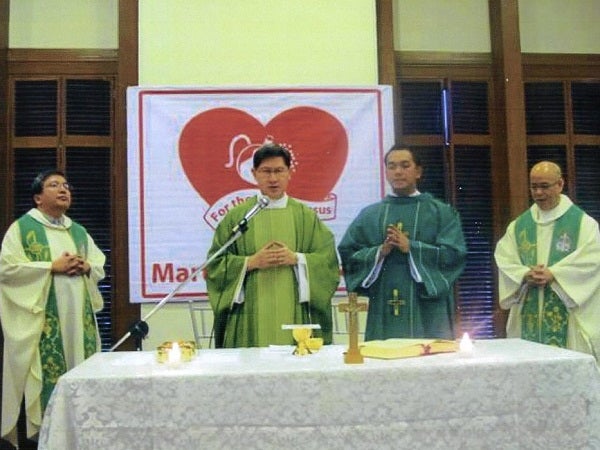 In connection with the canonization of Blessed Pedro Calungsod on Oct. 21 in Rome, a small chapel in Barangay Cebu in San Isidro, Isabela, was recently blessed and dedicated by Bishop Joseph Nacua, OFM-Cap, of Ilagan.

The chapel was dedicated to the soon-to-be saint. It was donated by Alfredo Viray and his family.  Bishop Nacua said it might be the first chapel to be dedicated  to the future saint.

After the Mass, a shared “agape” was also tendered by barangay residents led by the barangay captain. During this time, donation papers were submitted to the bishop who thanked the family and all who helped in making the celebration an affair to remember.

On hand as co-celebrant was the parish priest of San Isidro, Fr. Darwin Mamauag. Barangay Cebu took its name from the number of Zebu bulls and cows that used to roam the area when it was still unpopulated in former times.

Said Bishop Nacua: “It is our hope that Saint Pedro Calungsod will bless and guide the people of Barangay Cebu, most especially the youth to live up to their baptism and evangelize the area by clean living and joyful cooperation with the grace of a loving God.

Pop star Jamie Rivera sang “Kuya Pedro” for the  first time on Sept. 28, feast of San Lorenzo Ruiz,  during the closing of the National Laity Week at the University of Santo Tomas.

Rivera herself composed the song.  Noel Espidina did the musical arrangement. Rivera said the song, which is available on Youtube, is inspired by the fact that the young martyr was a catechist who taught about the faith and is now like a “big brother” to Filipinos.

According to Rivera, the song’s stanzas revolve around the different aspects of Calungsod’s persona—as a follower of God, a friend and a brother.

The Ars Cantica Ensemble did backup vocals for the recording.

Martha’s Vineyard, an organization of women in the service of the poor, marked its 28th anniversary on Sept. 5 with a thanksgiving Mass celebrated by Manila Archbishop Luis Antonio Tagle at Manila Polo Club.

Martha’s Vineyard is feeding 300 undernourished children in its new program. Every week, the members go to Baseco to assist in weighing the children to check on the improvement of their health.

Archbishop Tagle gave his blessings for the feeding program.

“The Holy Spirit impels us to  be men and women of service to those who are neglected,” he said. “Our mission comes from the Holy Spirit.”

To be spiritually formed in pursuing charity work, the archbishop suggested constant prayer, meditation and regular examination of conscience.

Then, he asked, “Are we using our gifts in a spiritual way, to remember God all the time?”

It is a Soroptimist International of the Americas-funded project supervised by Soroptimist Makati president Mimi Casanova Noble and project chair Imelda Vibar.

Soroptimist International is a worldwide service organization whose  mission is  to improve the lives of women.

Organizers are officers of Our Lady of Biglang Awa Foundation which, for the past 28 years, have given support to the following: annual subsidy to poor seminarians of the Diocese of Boac and Missionary Sisters of Biglang Awa whose apostolate is to attend to the infirm in the diocese.

The foundation also gives financial assistance to the repair of churches and to help maintain the office of the Diocesan Shrine of Mahal na Birhen ng Biglang Awa in Boac.

The public is invited to attend the Masses and ask for the intercession of the miraculous Virgin.

Devotees of Our Lady of the Pillar residing in Metro Manila are holding a dinner dance to raise funds for the schooling of 64 college scholars in Zamboanga City. “Noche Latino” will be held Oct. 20, 6 p.m., at the CAP Auditorium on Amorsolo corner Herrera and Adelantado Streets, Makati. President is Linda Atayde, while VP is veteran actress Lollie Mara. For details, please call Lilia at 8255321, or text Lucy at 0916-5448028.