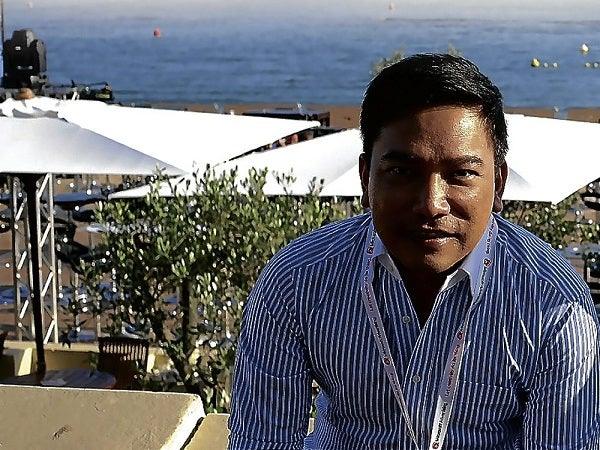 Alternately crossing his arms over his chest and grabbing at the front of his jacket during lunch, Pen Roque is clearly uncomfortable with the idea of having to talk about himself.

To him, any success is a team effort, and whatever great strides he’s achieved in his life and career are simply a result of his desire to do good work.

For someone with the foresight and gumption to turn relatively unknown brands into household names using marketing strategies that have redefined the rules of the game, “good work” is putting it lightly.

Roque’s is the story of a man who works behind the scenes—so he’s not of the visible set—yet whose strategic decisions could affect the spending habits of  consumers A-E—you and me, in short.

Consider several years ago, when Roque, then country director of Cheil (the advertising and marketing subsidiary of Samsung Electronics), was mandated by the head office in Korea to fast-track the company’s imaging in these shores. Given the brand’s entry in a field long dominated by industry giants, it was definitely a tall order. Even Roque, who was up for a new challenge after four years with the advertising agency Publicis Manila, acknowledged it was a difficult task.

But he did it—and in half the time the head office had given him. Veering away from the technology and innovation touted by competitors, he marketed Samsung as a chic and sexy lifestyle brand, an unexpected route that turned its mobile phones, laptops and flat-screen TVs into objects of desire among Manila’s style-setters.

Suddenly, the industry’s newest player was getting invites left and right to partner with high-profile fashion shows and key sporting events.

“We were just doing our job,” is the only way Roque can explain that branding feat. “How can you go wrong if you do your job properly and in the best way you know?”

The no-nonsense approach would reap a similar success for Champion, a laundry detergent created and launched in 1997 by Peerless Product Manufacturing Corporation. Roque, who left Samsung after close to seven years to join Peerless in late 2010, marketed the then old yet low-key laundry soap using a strategy that even its fiercest rivals didn’t see coming.

Instead of happy housewives and dancing labandera hanging their newly washed clothes to dry, celebrities with credibility like Susan Roces and Ryan Agoncillo spoke in earnest about the discerning Filipino consumer. Meanwhile, its variant Champion Infinity has been positioned as a lifestyle brand; at Inquirer’s recent Face-Off 2012 Filipino Bridal Fashion Show, Champion Infinity sponsored the Filipino Bridal Heritage exhibit at Makati’s Dusit Thani Hotel and Rockwell Power Plant Mall. The exhibit displayed the famous gowns of Pitoy Moreno for Susan Roces and Mariter Macapagal, for instance.

Today, Champion is among the top three laundry soap brands in the country, accounting for 20 percent of the market, reports an article in Inquirer’s Business section.

“At the end of the day, it’s all about your consumer and the quality of your product,” says Roque, now Peerless corporate marketing director.

Working with a group of people that encourages creativity and innovation helped, too.

Incidentally, Roque’s departure from Samsung was no career move; it was a personal one. Despite his work-life balance and the respect of colleagues, the marketing man knew he could be happier.

“I think there comes a time in every person’s life when they try to find meaning,” he says, groping for the right words to describe what he was feeling years ago. “I guess I was looking for that one thing I wanted to do.”

For a while, he thought it was teaching. Roque, who finished psychology marketing at De La Salle University, lectured on marketing communications in his alma mater. Apparently, he made quite an impression on students; many continue to thank him for his insights and ideas.

Once, after having dinner in a restaurant in Greenhills, he asked for his bill, only to be told that it had already been settled by one of his former students.

“This guy came up to me and introduced himself,” says Roque with a smile. “He told me my lectures made a great impact in his career.”

Like his unexpected marketing strategies, Roque discovered fulfillment in, of all things, babies. He formed a foundation for orphans with friends Ronald Pineda, Sheila Romero, Nancy Binay-Angeles and lawyer   Jay Jay Onrubia-Puno. Bright Halls is based in Quezon City and looks after orphans between ages 0 and 2.

Four caregivers, a head nurse, and an administration officer oversee day-to-day operations and the five babies now under their care. Run on private donations, Bright Halls’ main objective is finding suitable homes for its babies.

Once the babies turn 2, the Department of Social Welfare and Development (DSWD) takes charge of moving them to another institution.

“According to the DSWD, this is the age where humans need the most warmth and care,” Roque explains why Bright Halls has chosen to focus on infants. “Babies know when they’re rejected. Even when they’re still in the womb and their mother decides to give them up, babies feel that. Go to an orphanage and what do babies do? They run to you, right? They just want to be hugged.”

Now 44, Paquito Gutierrez Roque was just a baby himself when his “destiny” was determined by his half-Chinese father. Soft and clumsy, he remembers his dad constantly “pressing my arms and cheeks, telling everyone, ‘itong anak kong ito, maswerte.’

“Even my sister thinks so,” says Roque today. “She says that among us kids, I may not be the smartest but I’m the luckiest.”

He’s also a family man at heart. Free days find him at home with his siblings in Angeles, Pampanga, while Sundays are occasionally spent in Nueva Ecija, where he runs his Havaianas store. Of late, he devotes a couple of hours in the afternoon to Bright Halls.

Taking his cell phone, he shows a photo of himself in T-shirt and shorts, sitting on the floor, surrounded by the foundation’s little wards. “It gives you a different high,” he talks about caring for babies. “It keeps you grounded.”

Friends fear that the foundation will eventually take Roque away from his corporate life.

“I don’t think so,” says the marketing strategist, who also does consultancy work for Liwayway Marketing Corporation, makers of Oishi brand of snack products. “I still love what I do. And a good friend recently told me that at my age, I’ll just end up going back if I leave [the corporate world].”

“What I have now,” he decides, “is perfect.” Just doing his job, as he likes to put it.