12 ‘Best Dressed Women’ prove it on and off the ramp | Lifestyle.INQ ❮ ❯ 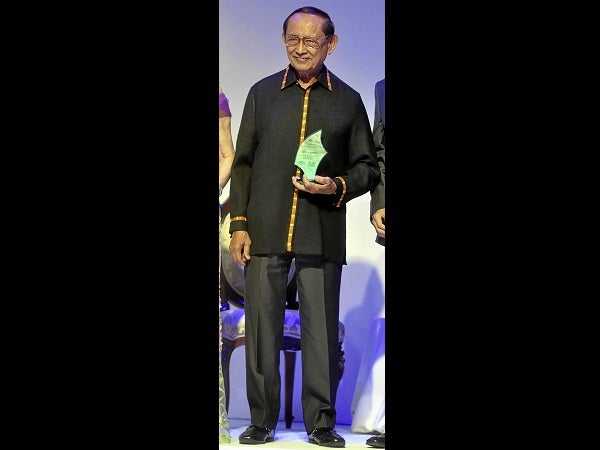 12 ‘Best Dressed Women’ prove it on and off the ramp

Not a few guests held their breath, hoping no one would trip or, worse, fall flat on her face. That would have been the bigger spectacle as 12 accomplished and stylish women walked for a cause recently at the 9th Best Dressed Women of the Philippines annual awards at Shangri-La Makati’s Rizal ballroom.

Organizers billed the event as a ball. But in lieu of dancing, guests were treated to a fashion show, complete with a ramp set in the middle of the huge ballroom, featuring the awardees.

Walking in platform stilettos hovering between five to seven inches high was no joke. But the ladies themselves seemed the least bit worried, poised all throughout as they basked in the cheers of friends and family. Some even managed to ham it up and assume characters as they struck poses and glided on the ramp.

Cruz, the evening’s lone “style icon,” had four gown changes, including the one she wore earlier during cocktails. Johnny Litton hosted the black-tie, sit-down dinner event.

The Philippine Cancer Society, led by Dr. Roberto Paterno, spearheads the project. As in past years, proceeds of the dinner show were for the benefit of indigent Filipinos suffering from cancer.

“This event may seem frivolous, but it is not,” said Paterno. “Its aim is really to raise funds and awareness for a truly worthy cause. Just recently, we were able to provide guidance, treatment and diagnostics to more than 800 cancer victims.”

According to studies, nine percent of Filipinos are either suffering or showing symptoms related to cancer, said Litton. Close to 30,000 young and indigent Filipinos are in need of chemotherapy.

Litton shared his own family’s battle with cancer. Son EJ Litton succumbed to the disease almost a decade ago. He acknowledged that despite the advances in medicine, treatment of cancer remains prohibitive to majority of Filipinos.

“When he was diagnosed with cancer, my son EJ was given three months to live,” he said. “But we were able to extend his life for 2 and ½ years.”

The family was financially drained, said Litton, but they wouldn’t think twice about doing it again. The borrowed time EJ was able to spend with them was priceless.

For the first time since its inception, organizers led by Helen Ong, event chair, handed out Men of Influence awards.

But the night definitely belonged to their female counterparts, the undisputed stars of the event on and off the ramp.