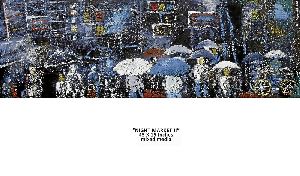 PAINTERS AND artists always endeavor positively to reinvent our vision of the world. Iza Caparas’ “Urban Life” offers a different vista from the brutal dichotomy in our sight, the abusive hierarchy of form over ground, leading us away from ruins, destruction of our milieu, and ultimate acceptance of the other and of what is different. 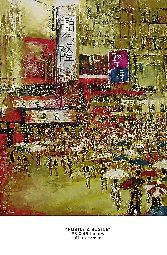 “Hustle and Bustle” depicts the city with frequent passersby, either strolling aimlessly or purposely going back to their residences or workplaces.

One can never tell where exactly these people are going because there is no sense in their direction. She tries to depict the people in blurs and impressions, intimating a form of invisibility, of being lost, and of obsolescence, quite typical of urban life, where everything including our bodies and desires become a commodity.

Marx would say everything that is solid melts into the air. This is true of our experiences in the city where daily life is punctuated by exchanges, by our ability to produce and reproduce such value, and in the process left hanging whether the work put is worth doing or the transactions at the end of the day are fair.

In “Night Café,” Caparas depicts people as apparitions merging wth the buildings and shadows, and the viewer is given a distant perspective.

The ghostlike existence of people here is the very logic of capital accumulation. Jonathan Beller notes in his book “Acquiring Eyes” how we seldom evoke a clear reference point for Manila, and instead it is the traffic and malls that serve as landmarks, iterations of global forces that explode in all their noxious acrimony in urbanity.

In “Night Market 2” and “Raindrops,” we see also the same saturation of phantasms that communicates, according to Jean Baudrillard, a mechanical euphoria associated with a kind of pleasure that is unrealistic, a kind of suspension of existence, and a kind of absence of responsibility. Her art points to this experience of vertigo in the city, to our hallucinations that reduce our world to two-dimensionality, to an image, stripping away its relief and its historicity, and, in a way, ushering us into a state of contradiction and immobility.

As a painter of urban life, Caparas gives us a way of looking at things. In “Parade,” we can see all the rancor of city life brought about by the onslaught of the capital, and yet this work is never somber, but rather resonant in color, without hatred but in the act of remorse, not condemning but cognizant of suffering.

She may be alluding to the festive and resilient spirit we can all tap during crisis, the collective spirit that animates us from time immemorial, and that still informs and forms our attitudes and desires.