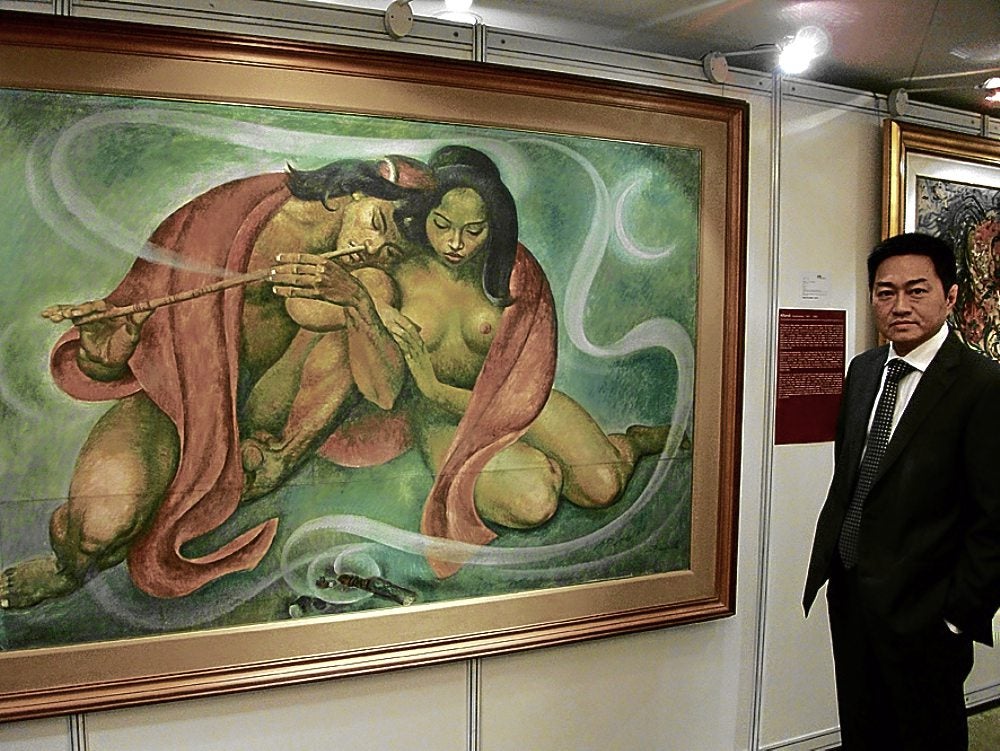 DANIEL Komala, One East-Larasati managing director, with the Botong-that-got-away, “Nose Flute,” sold for a whopping P27.9 million but to an Indonesian private collector.

Botong, Ventura, and the Million-Dollar Club

Which Filipino artist rules on the international auction circuit?

Only two Filipinos to date have risen to the Valhalla of the international auction arena—or the Million-Dollar Club for artists whose works have hit the seven-figure mark.

The first ever was Juan Luna, who, on his 145th birth anniversary on Oct. 27, 2002, scored the sensational price of $1 million in an international auction for “Parisian Life.” As controversial after death as he was in life, Luna’s record, for the highest price to be paid for any Filipino artist at auction, would remain unbroken until almost a decade later.

It would be a young turk, then described by his auction catalogue, in the same encouraging tone as the World Bank uses for a country with an optimistic upside, as an “emerging artist.” What an understatement!

Before, the betting had been that the next to take the mantle from Luna would perhaps be Anita Magsaysay-Ho (one of the vaunted 13 Moderns—and the last survivor until her passing this year); or even the younger BenCab, whose works start a feeding frenzy in Manila each time they are released. Neither of them, bafflingly, had passed the half-million-dollar mark.

Instead, the Game of Thrones was played and won by none other than Ronald Ventura, then at the ripe old age of 37, at the time of his ascension into the august club.

While it sent shock waves through Manila’s small but tight art scene, the news did not come close to the national hysteria caused by the sale of Luna’s intriguing painting.  “Parisian Life” (created in 1892) quickly became the most famous painting in the Philippines and fodder for front-page headlines, countless critiques and scholarly tomes for years afterward.

What was even more astonishing is that the work, which features its original owner Don Ariston Bautista, José Rizal and the painter’s brother Antonio in the background, is actually larger in the public’s imagination than it is in real life.

The portrait of a French coquette perched on a narrow banquette measures just 22 x 30 inches—a mere sliver of paint and canvas compared to the au courant dimensions demanded by young zillionaire collectors, and just a fraction of the stupendous mural size of Ventura’s million-dollar work.

Ventura’s “Grayground” (painted in 2008) measures an imposing 5 feet high and “Spoliarium”-length of 13 ft. When the hammer came down at the Spring 2011 auctions, it sold for $1.1 million, creating a world record for any contemporary Asian painting at auction, a tour de force of oil and graphite, photorealism and graffiti.

This last auction season, a third contender appeared on the horizon: none other than  Carlos “Botong” V. Francisco,  whose pantheon of heroic Filipinos has made him perhaps the most beloved local artist.

It was set for a prestigious “evening sale” by One East-Larasati Hong Kong, itself a hot boutique-operation house that’s been giving the two venerable old ladies of the auction world a run for their money.

On the block was the epic-size “Nose Flute” (commissioned in 1955)  at 4 x 6 ft, with an impeccable pedigree, belonging to a family with bloodlines to most of the country’s political Who’s Who, then and now.

Works like “Nose Flute” always spark speculation as to their final price because Botong works of this fineness are very rarely seen on the market. The question on every collector’s mind was: Would it match the benchmarks set by the old master Luna or the young turk Ventura?

The answer was both yes and no.

In the infinite wisdom of the international auction market—which some say is the closest one gets  to a state of perfect free competition—the price paid for the Botong reflected his achievement somewhere between the two.

“Nose Flute” snapped at the heels of the Luna million-dollar benchmark at $649,000, all things considered, including that it was roughly about double the size of “Parisian Life.” (Both have as subject the idea of courtship—one in the sophisticated French capital, the other in the brusque Philippine highlands.)

That was confirmed at a Christie’s auction, which featured Ventura’s “Zookeeper,” also at an evening sale, a week later. (Evening sales are for the crème de la crème of artworks, a very tight collection of pieces that either belong to the premier league of artists or are the best in their class. A second Ventura was consigned to the next day’s morning sale, interestingly enough.)

“Zookeeper,” which measures almost as big as “Nose Flute” at 4×5 ft, sailed out of the auction hall for the hammer price of $298,000—or less than half of the Botong work, but still reflecting the appeal of exceptional caliber.

An unnamed  Botong fan set the pace for “Nose Flute” with an opening bid of $380,000 at One East-Larasati.  The official stats were: hammer price (inclusive of buyer’s premium) that leaped to a new auction record for a Botong Francisco of $648,258 (or P27.9 million), making it the priciest Botong to date.

That record price returned Botong to his status as the second Filipino artist, after Luna, whose fame and artistry would cross oceans. In 1953, he had become so internationally famous that his murals for the First Philippine International Fair in Manila were featured in Newsweek.

Daniel Komala, managing director for One East-Larasati Hong Kong, who was grinning ear to ear with the results, explained: “Quality, rarity and, yes, size, also matter. But history is priceless and the Botong is a piece of history. What is important is that the Botong’s record-breaking price, which more than tripled his previous record, finally recognizes his place in history. Often, the new generation of collectors forgets his significance in the development of Philippine art. He is, after all, a National Artist—and the first modernist to be accorded this honor.”