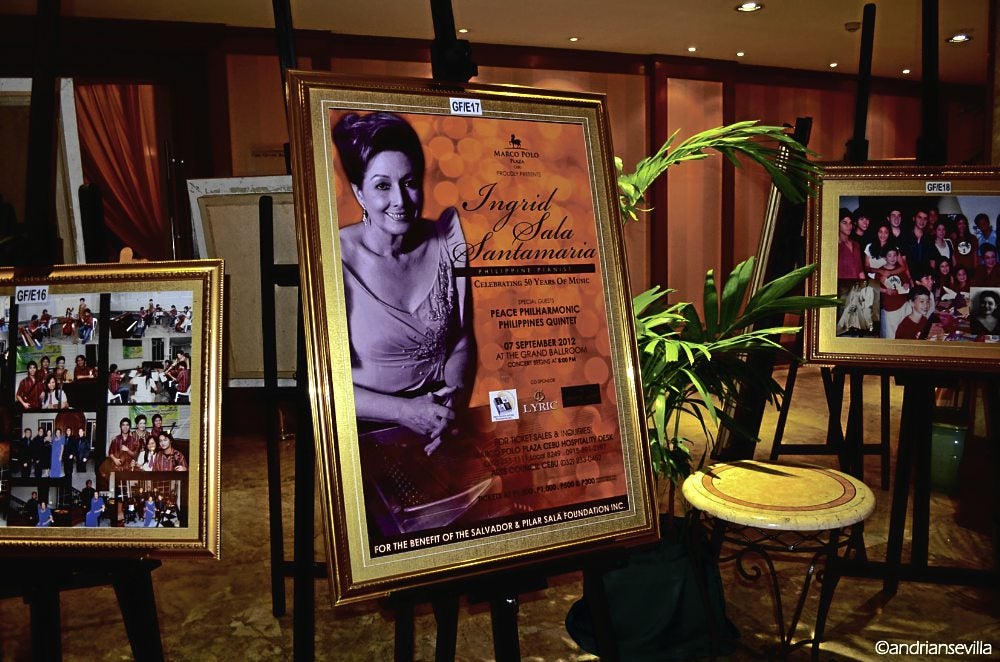 MEMORABILIA exhibit at the lobby

Pianist Ingrid Sala Santamaria is celebrating her golden anniversary as a musician this year.

Marco Polo Plaza of Cebu City highlighted the celebration by featuring her in a concert. It was packed full by music-lovers from all over the country.

At the lobby, an exhibit of her memorabilia, which consists of press clippings, souvenir programs and photographs, was held days before the event. It will move to Cebu City Museum for extended viewing.

The event was in itself a “miracle,” a conjuncture of kindness afforded by some persons and institutions they represent, said the honoree backstage after the concert.

Ingrid said the Salvador and Pilar Sala Foundation Inc. (SPSFI) was just inquiring about the use of the lobby to exhibit her memorabilia when amiable Marco Polo GM Hans Hauri offered the ballroom for the “milestone celebration.”

The Cebu Arts Council pitched in its share by marketing the tickets. Joy Alma Cristobal, president of Lyric Pianos and Organ Inc., offered the use of the brand-new handcrafted Kawai Shigeru, which also went on display at the hotel’s lobby days before the performance.

Incidentally, the venue is just a few minutes’ drive from Ingrid’s ancestral house on Gorordo Street in Lahug District, where the old airport was previously located.

In the middle of the ballroom, a stage below a chandelier artfully framed by a canopy was set up.

Now on her septuagenarian years, Ingrid’s stamina for playing has not diminished. Her musical passion still burns!

The year 1962 marked the formal launch of her career as a pianist. At her alma mater, Santa Isabel College, she played Schumann’s Piano Concerto in A Minor with the Filipino Youth Symphony Orchestra under the baton of the late maestro Luis Valencia, for her master’s in Piano Music performance. (Some months ago, she gifted her alma mater with a grand parlor Kawai piano as a token of gratitude.)

This was followed by another performance, a solo recital, at the Fleur de Lis Auditorium of Saint Paul’s College on Herran (now Pedro Gil) Street. The recital was part of the prize for topping the Search for Talent sponsored by Jeunesse Musicale of the Philippines.

A month later, she was soloist of the then National Philharmonic Orchestra conducted by the late Redentor Romero at Philamlife Theater, playing Beethoven’s Emperor Concerto.

This was followed two months later with another performance at the now-demolished Rizal Theater, as soloist of the Quezon City Philharmonic Orchestra, with British conductor Duddley Simpson performing Cesar Franck’s Symphonic Variations. The occasion was the ballet performance of prima ballerina Dame Margot Fonteyn and the stars of Royal Ballet.

Ingrid’s solid musical career has since been identified with piano music. She performed not only on the concert stage but on television as well.

Another feather was added to her cap with the launch of the Cebu Youth Symphony Orchestra in the 1990s, which put Cebu City on the national musical map. The orchestra performed not only in Cebu City but also in Metro Manila, Visayas and Mindanao.

After 10 years, it evolved into the Peace Philharmonic Orchestra (PPP), many of whose musicians were scholars of SPSFI. Today, these alumni manage various studios in Cebu City providing musical training to  musical enthusiasts.

When the orchestra folded up, she and Reynaldo Reyes forged a formidable tandem known as Romantic Piano Concertos Journey. Like true musical missionaries, they have been performing all over the country to foster a wider appreciation of piano concerto, complete with a question-and-answer forum at the end of each performance.

Their program is culled from piano concertos of the Romantic period. They have so far logged in over 400 performances not only in the country but also in parts of Asia, USA and Canada.

The two awards bestowed on her during the Cebu concert summed up her accomplishments. The St. Theresa Alumni Association Award cited her as a “missionary” musician who had imbibed the missionary spirit espoused by her school where she earned her secondary degree.

The award was handed over by art connoisseur and Inquirer Sunday Lifestyle columnist Jaime Picornell. He proudly informed the audience the council voted unanimously to give her the award.

The concert was a heart-warming event. It not only focused on the honoree’s musical artistry but also highlighted filial solidarity.

The audience was touched with the entrance of the honoree’s 16 grandchildren, who escorted their grandma to the stage, to the tune of Handel’s festive suite, “Water Music.”

Later, children and grandchildren joined the honoree on stage for a souvenir pose.

Ingrid played the two concertos, which are part of the repertoire of the Concerto Journey, with abandon. She knew the contrasting music of the concertos by heart and rendered it spontaneously.

Playing with the ensemble was also an intimate, joyous reunion with the musicians, four of whom were scholars of SPSFI. All five were also alumni of PPP: Marc Hamlet Mercado, violin; Reynaldo Abellana, violin; Christian Roy Abaiz, clarinet; Christopher Manus, double bass; and Ariel Perez, a member of the faculty of the foundation.

Jeffrey Solares, who was a faculty member of the foundation, and music director of PPP, arranged the concertos for the ensembles.

The concert was a sumptuous feast of pianism. Ingrid etched lush and brilliant tones as she played with abandon. Obviously she was pleased with the well-oiled response, and the singing, mellow tones the new handcrafted Kawai Shigeru gave.

At the end, both pianist and the ensemble elicited hearty applause from the audience. Indeed, what a feat for them to collectively perform without the benefit of a conductor. Sensitivity crowned their playing. Attacks, repartee and playing together (tutti) were decisively done and synchronized.

The ambiance was very intimate. The two concertos were disguised as chamber music due to their thin texture. Listening attentively, the audience clamored for an encore at the end, which the ensemble readily gave.

Ingrid once more struck her fingers on the piano, this time essaying the first movement of Rachmaninov’s Piano Concerto No. 2 in C Minor, that all the more earned warm applause from the audience.