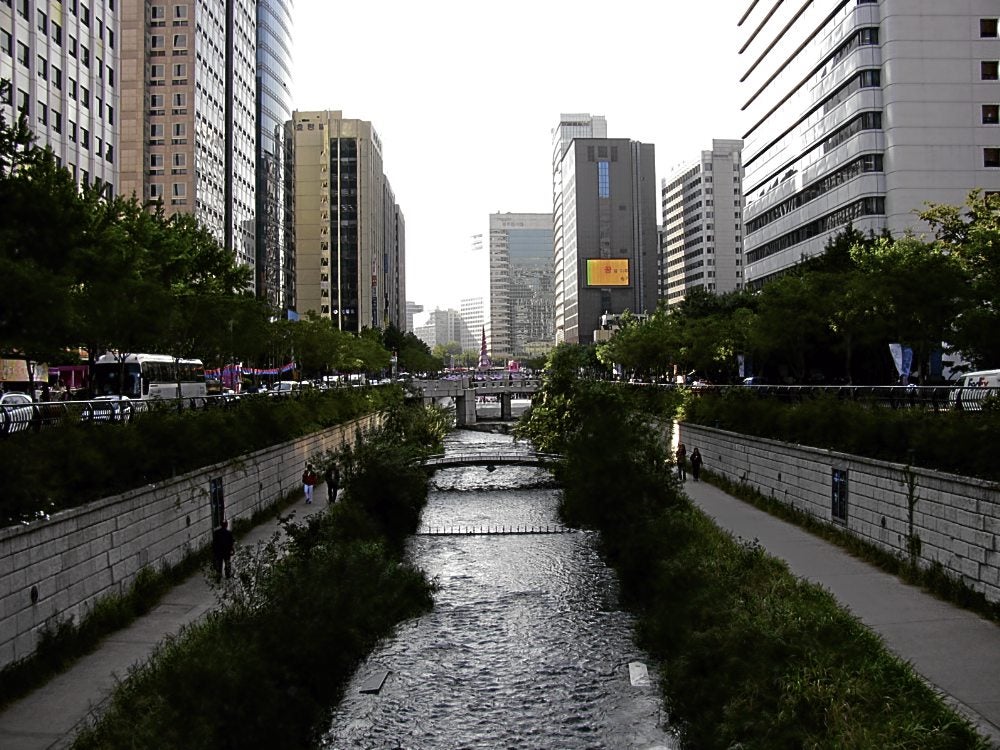 “WE CAN also learn a lot from Seoul’s Cheonggyecheon,” UST architecture professor Rizalito Mercado says. “Its elevated expressway was torn down to revive the stream underneath.”

Planning and awareness are key to disaster management, experts agree

The recent heavy monsoon rains were a déjà vu to many Filipinos, bringing back memories of the “Ondoy” flooding in 2009.

History repeats itself as flash floods causing unprecedented damage to lives and properties are expected to recur.

In light of these fears, Sen. Loren Legarda, as well as University of Santo Tomas College of Architecture professors Rizalito Mercado, Enrique Sta. Maria and Manolo Noche,  agree that proper planning and education are necessary to stem the damage of heavy monsoon rains, bad weather, earthquakes, and other natural disasters.

Legarda, chair of the Senate Committee on Climate Change, said people should expect heavy monsoon rains to be the norm in the years to come.

“This is climate change,” she said. “And while we experience weather disturbances that bring stronger winds and heavier rains, we have to strengthen our efforts in preparing our communities.”

“We need to recover and rebuild our lives with this in mind,” Legarda explained. “We need to build back better, by further reducing people’s vulnerability, by further building our resilience to floods.”

She added that more and more countries were also suffering floods of unprecedented magnitude such as Cambodia, Thailand and Bangladesh.

“The Climate Change Act and the Disaster Risk Reduction and Management Act, which have been cited as ‘the best laws in the world’ by the Special Representative of the UN Secretary-General Ms Margareta Wahlstrom, must be complemented by effective implementation from the executive,” the senator said.

On the planning aspect, Mercado lamented that the flooding problem was compounded by haphazard enforcement of  zoning regulations. He cited the uncontrolled construction of high-rise buildings in Metro Manila.

“Zoning is adjusted based on market conditions with disregard of how these high-rise developments can affect the community,” he said. “Add that to the antiquated and overburdened drainage system, you have the perfect formula for more floods to an already flood-prone area.”

Sta. Maria, who’s also an in-house architect of the Pontifical University, said the clogged estuaries were a major cause of flooding.

“The informal settlers living near the esteros (estuaries)  discriminately dispose their trash there,” he said. “These people should be relocated away from these bodies of water, and be given information on the effects of their actions.”

To prevent further casualties, Noche suggested rezoning the city by highlighting danger zones. There was also need for “re-greening.”

“Too much love for concrete results in water going nowhere,” he said.

He urged developers to  build up as opposed to horizontal development to conserve open spaces and help create a green buffer zone or parkway around the city.

“This would force developments to go vertical and leave a peripheral green field around the metropolis,” he said.

Noche and Mercado suggested that the Philippines should look at other countries for models of successful urban planning.

“The former expressways were converted into parks which increased the real estate valuation of property within the area and increased the quality of life.”

“We can also learn a lot from Seoul’s Cheonggyecheon,” Mercado said. “Its elevated expressway was torn down to revive the stream underneath.”

“The area is now laden with parks that weave all people to the urban fabric,” added Mercado, who explained that the renovation was undertaken when Myung-Bak Lee was Seoul mayor.

“He risked everything and Seoul is now reaping the rewards of his political will,” said Mercado. “The person who is influential enough to put a halt on a flyover will surely make a good president.”

Sta. Maria said UST had also been doing its job in mitigating the damages of the flood, since the university was located in the Sampaloc district of Manila which was especially flood-prone.

“Aside from proper waste segregation and banning of polyestrene, we have also been relocating offices to the second floor to minimize the damage of floods,” Sta. Maria said. “As of now, the university is already trying to come up with a long-term solution to address the flood that plagues the campus.”

The three UST professors said young Filipinos aspiring for careers in architecture and urban planning should be taught how to create environmentally responsive designs, as well as design principles on how to lessen the effects of disasters.

“Nature is not the problem, it is man,” said Noche. “As long as we do not respect the environment, climate, landscape, ecology, topography, hydrography and geography, these will eventually catch up with man’s abusive nature and ways.”

Mercado said students should be encouraged and trained to make designs with disaster mitigation and climate change as primary design considerations.

“Architecture goes beyond nice facades and aesthetics,” he said. “Safety aspects are paramount to every design.”

Mercado added that architecture should synergize with other disciplines such as landscape architecture, natural science, planning and environmental management—all geared toward sustainable development and climate change adaptation.

Sta. Maria said that when designing buildings students should consider how they would affect the surroundings.

“Students should be molded to design buildings and evaluate what their effects will be on the community,” he said. “They must learn to look at the bigger picture.”

Mercado said the government should have the political will to enforce zoning regulations and to bring down all the wrong infrastructure created in the past years that merely compounded disasters, such as flyovers.

“The lessons of ‘Ondoy’ and ‘Sendong’ should permeate all the stakeholders,” said Mercado. “Investors will be wary of putting their money in the Philippines because it will only be lost to disasters.”

“All sectors must work together,” she said. “The government must seriously look into improving the flood prevention and mitigation measures in the National Capital Region.

“The private sector, on the other hand, must strengthen their business continuity plans, especially for hospitals and other lifelines, which are vital for post-disaster activities.”

She urged people to heed disaster warnings and cooperate with the government when they would be asked to evacuate.

“The best choice we have is to make our nation disaster-resilient to free us, once and for all, from the exhausting and costly cycle of rebuilding our communities every single time nature unleashes its wrath,” Legarda said.