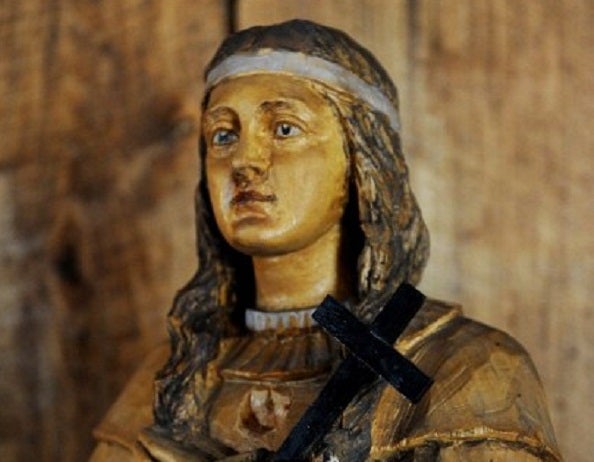 Canadians flock to Rome for canonization of Mohawk

MONTREAL—A Mohawk woman will on Sunday become the first Native American to be canonized a Catholic saint, in a ceremony in the Vatican 300 years after her death, and 1,500 fellow Canadians will be there.

Kateri Tekakwitha, known as “Lily of the Mohawks,” was born in 1656 in what is now Auriesville in the US state of New York, but died while serving the church in Kahnawake in what is now Canada’s Quebec province.

For centuries she has been a symbol of hope for Native Americans, despite the grim details of her short and painful life.

Converted by Jesuits, the young woman who was left scarred and partially blind from smallpox devoted her life to God to an extent that stunned even European missionaries.

She died aged 24, after years of self-flagellation and deteriorating health, but according to tradition among some believers her scars disappeared, leaving her skin smooth and her face beautiful.

Tekakwitha was declared “venerable” by the church in 1943 and was beatified by Pope John Paul II in 1980. Her qualifying miracle for sainthood, according to the Vatican, was curing a boy of a flesh-eating disease.

For many Native Americans, especially among the Mohawk and other Iroquois tribes straddling the US-Canadian border, Kateri’s sainthood was already overdue decades ago.

The Vatican needed a certified miracle from the tribeswoman, so followers submitted reports of dozens: everything from healing the sick to levitating a man off the ground and appearing herself, hovering in deerskin clothes.

None of these passed muster. But then in 2006 doctors in Seattle confirmed an astonishing event.

Against all medical expectations, an 11-year-old Native American boy fatally ill with a flesh-eating bacteria made a full recovery. His parents had been praying for Kateri’s grace.

A dozen Canadian bishops including Richard Smith, archbishop of Edmonton, Alberta, and head of the Canadian Conference of Catholic Bishops, and Lionel Gendron, bishop of Saint-Jean-Longueuil diocese in Quebec where Tekakwitha’s tomb and a shrine are located, will be on hand for her canonization by Pope Benedict XVI, said church spokesman Rene Laprise.

At her final resting place a massive screen will be erected so locals can watch the ceremony broadcast back from Saint Peter’s Basilica.

In Canada, many Native Americans see Tekakwitha’s canonization as a step toward healing old divisions between North America’s original inhabitants and European settlers.

It may also take some of the sting out of anger over the Catholic Church’s role in attempts to assimilate natives at residential schools.

A group of former residential school students will be among the delegation attending her canonization.

But south of the border in the United States, Native Americans are split.

Alicia Cook from upstate New York told Syracuse’s The Post-Standard newspaper: “The church has been telling us for years we’re heathens. The white man has hurt us enough.”

But former altar boy Doug George-Kanentiio said: “I had a lot of anger at the church at the things they had done to the native people and the world and the moral compromises they made.

“It took me a while to begin to adopt a different approach to this, not one based on history, but compassion for a young woman who was determined she was going to emulate the suffering of Jesus Christ. That passion is remarkable.”