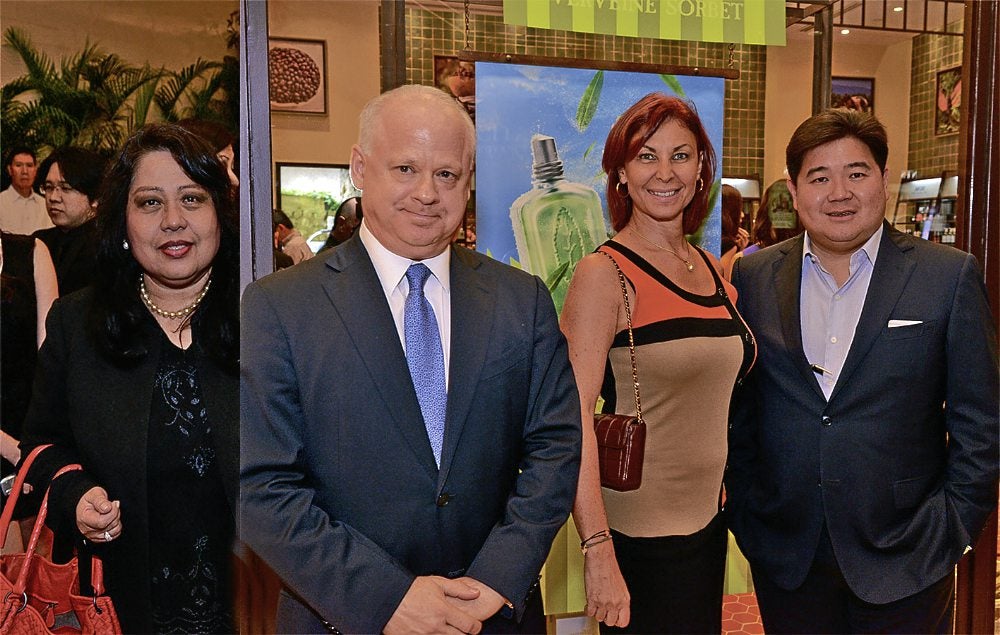 L’Occitane opened its first flagship store in the Philippines at the Newport Mall, Resorts World Manila.

Leading the opening was L’Occitane Asia Pacific president Andre Hoffman and Stores Specialists Inc. EVP Anton Huang, no less. They were joined in the ribbon-cutting ceremony by Madame Isabelle Garachon, wife of the French ambassador.

The festivities continued with an exclusive dinner at Impressions, also at Resorts World, hosted by monsieurs Hoffman and Huang.

Designers Rajo Laurel and Inno Sotto were there, palanggas, and so were producer Michael Carandang and actress Giselle Toengi, plus other L’Occitane followers.

“Founded in France in 1976, L’Occitane began when Olivier Baussan purchased a distillery and in his garage created his very first essential oil,” said Hoffman. “Baussan expanded his essential oils to a full cosmetic range now available in over 2,000 shops worldwide and 413 in Asia. Over the course of more than three decades, there have been many milestones in the brand’s history.”

We were also told that during its 30th anniversary in 2006,  L’Occitane Foundation was created, “designed to support visually impaired people, seek the economic empowerment of women and men, and preserve knowledge about nature,” said Hoffman.

An even bigger year for the company was 2008, when the first L’Occitane Spa in Paris was opened during which it also launched its Oliver-certified Organic Ecocert range.

The last three years “were also causes for celebration for L’Occitane,” said Huang. “The year 2009 saw the launch of the Divine anti-aging cream, tested and proven with three patents,” he said.

This was followed in 2010 “with the introduction of L’Occitane in the Hong Kong Stock Exchange.”

Citibank and Cebu Pacific have teamed up and come up with the Cebu Pacific Citibank Card, giving Filipinos more reasons to travel around the country, dahlings.

During the launching at Filipinas Heritage Library, they presented the Juan-Way Ticket promotion, which rewards new Cebu Pacific Citibank cardholders with, take note, palanggas, a free one-way ticket to nearly all domestic destinations.

“The Cebu Pacific Citibank Card is one of the most successful launches we’ve seen in more than 20 years that we’ve been serving credit cardholders in the Philippines,” said Citibank credit payment products director Bea Tan. “With this promo, we hope more Filipinos can experience the joy of discovering their own country.”

This promo is linked with the Department of Tourism’s (DOT) “It’s more fun in the Philippines” campaign. “We hope to contribute to this tourism campaign by enticing consumers to make local travels through more convenient opportunities and offers such as the Juan-Way Ticket promo,” said Cebu Pacific vice president for marketing Candice Iyog.

The launch took on a Filipino fiesta ambiance, complete with yummy Filipino dishes from Top of the Citi by chef Jessie Sincioco, dahlings.

Cebu Pacific credit card comes with loads of rewards. You get notifications of seat sale at least two hours before the sale goes public, earn one credit-card point that never expires for every peso spent on the card, plus other wows at the online facility exclusive to Cebu Pacific Citibank cardholders regardless of travel date or destination.

Who would have thought a high-end beer joint would become one of the most popular places to see and be seen in?

Well, the hard-to-beat Draft Gastropub has just marked its first year as the foremost pub in town.

It just celebrated its success as the “No. 1 pub” in our town in a party that saw overflowing drinks such as Becks, Stella Artois and Hoegaarden, which drowned the scrumptious dishes by acclaimed chef Carlo Miguel, no less, palanggas.

Guests were entertained by “Rockieoke night” hosted by Draft’s Stephen Ku, as Guji Lorenzana and the band played fab sounds that perfectly matched the world-class beer and food, palanggas.

More surprises came our way when the pub announced a new branch will open its doors sooner than soon in Rockwell, dahlings.